The Finke River recharge zone (Figure 36) has been recognised as commencing approximately 6 km west of the Finke Community and terminating 36 km downstream near the margin of the confining beds, covering an area of approximately 13 km2 (Love et al., 2013). The decadal floods originating in the MacDonnell Ranges that inundate the Finke Floodout and are described in Section 1.1.5.1.1 have been identified as the key events for recharge to the GAB, with hydraulic and environmental tracer data indicating that the recharge from smaller, local flows is negligible in comparison to the bigger floods. This is illustrated by considering that although annual recharge rates through the Finke River are estimated at between 380 and 850 mm/year, the measured recharge from a single flood event in 2010 was 1275 mm. In addition to the infiltration in the Finke River recharge zone, observational evidence suggests that the floodwaters reaching the Finke Floodout recharge a shallow aquifer, which helps sustain vegetative communities between intermittent flow events (D Wohling, pers. comm., 2013). In addition to recharge to the GAB, current research indicates that the Finke River may have potential for recharge to the deeper Pedirka Basin sediments (Wohling et al., 2013).

Observational evidence indicates that further connectivity between surface water and alluvial groundwater resources may occur throughout the length of the Finke River downstream of the recharge zone (Duguid, 2011). 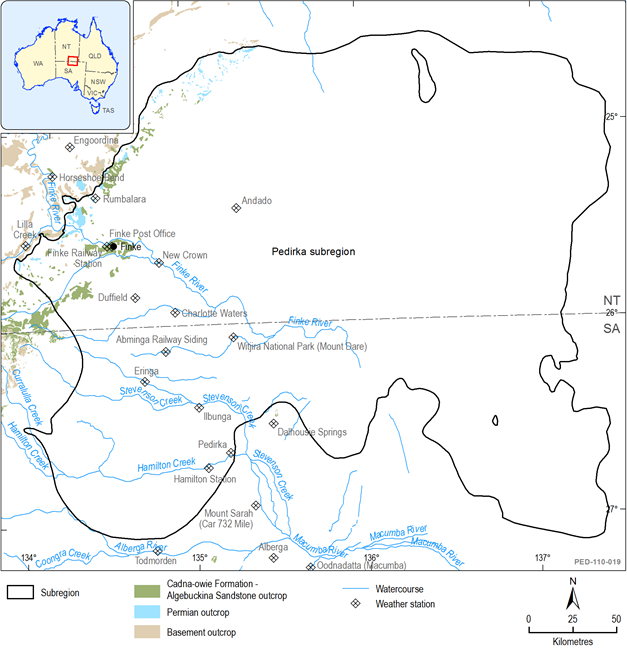