The climate of the Pedirka subregion has been described by Allan (1990) and McMahon et al. (2005) as arid; while Stern et al. (2000), using a modified version of the Köppen climate scheme, describes the region as ‘desert’. Weather in the subregion tends to be dominated by persistent high pressure systems; the location of the dominant high pressure system is an important influence on temperature in the region. Average maximum peak-summer monthly temperatures range between 36 °C and 39 °C, although daily maximums are regularly above 40 °C. In contrast, the minimum peak-winter monthly temperatures range from 5 °C to 8 °C, although daily minimums may drop below 0 °C. Monthly averages are shown in Figure 7 . 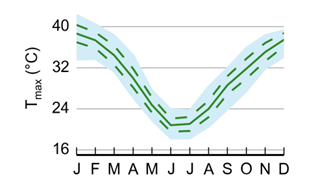 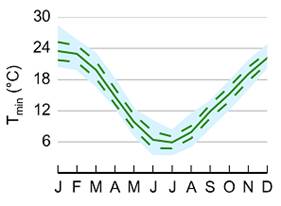 Mean annual rainfall varies between 140 mm in the east of the subregion to in excess of 260 mm to the west at the foot of the Musgrave Ranges (Figure 8). Averaged across the region, the long term mean annual rainfall is 161 mm. The variability of rainfall over the catchment is both spatially and temporally among the highest in Australia (Allan, 1985). Key rainfall events in the subregion range from convective thunderstorms, with limited spatial extent but often with high intensities, to large transient depressions of tropical origin (Allan, 1985; Croke et al., 1999) that result in regional flooding. Although the majority of rainfall in the Pedirka subregion occurs in the summer months, significant winter rains are not uncommon (Costelloe et al., 2005). This can be seen in Figure 9 where although there is little variation in the mean monthly precipitation depth, the extremes of rainfall in the summer months are very significant. 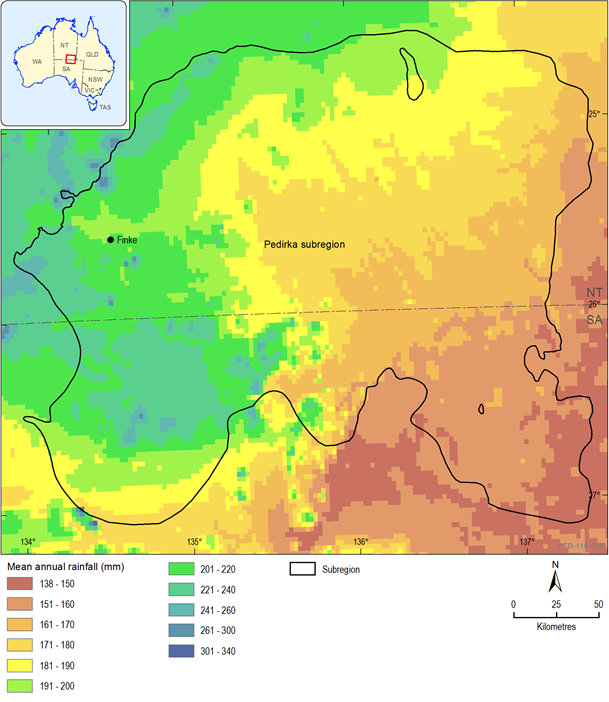 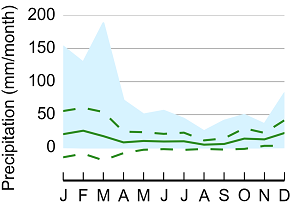 Table 3 shows rainfall summaries for selected sites in the Pedirka subregion, with their locations shown in Figure 10 . Of note is that the influence of summer monsoonal rains seems to diminish towards the south of the region. The northernmost site, Andado Station, receives over 46% of its annual total in the summer months (December – February). Further south, Eringa received around 40% of annual fall in the same period, and the southernmost site, Hamilton Station, only 29% in that period. These observations highlight the complexities inherent in water resource modelling in this area.

Table 3 Rainfall summary for selected sites in the Pedirka subregion 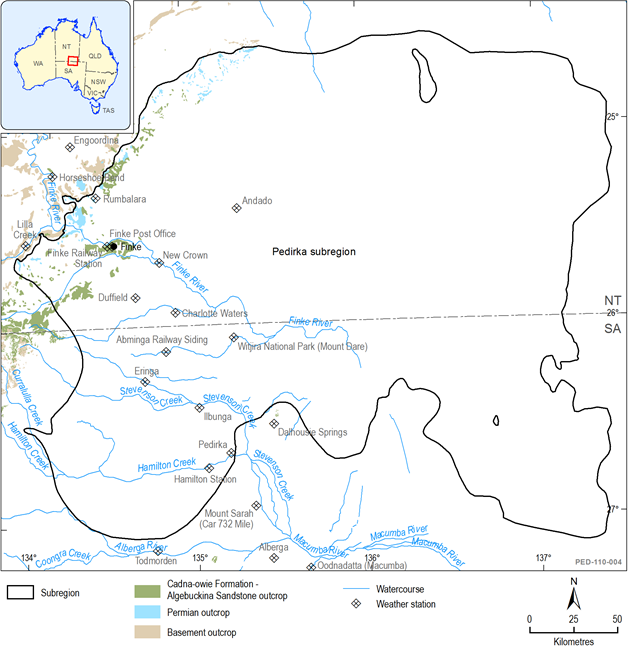 Figure 10 Location of weather monitoring stations in the Pedirka subregion 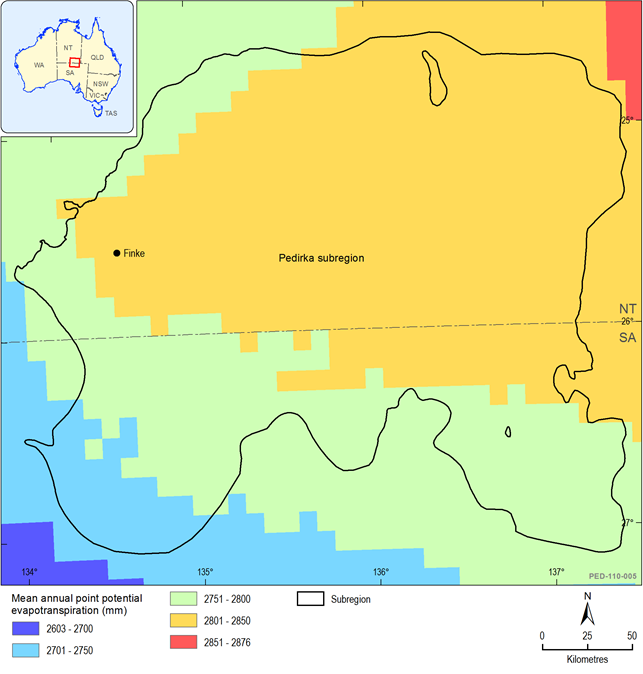 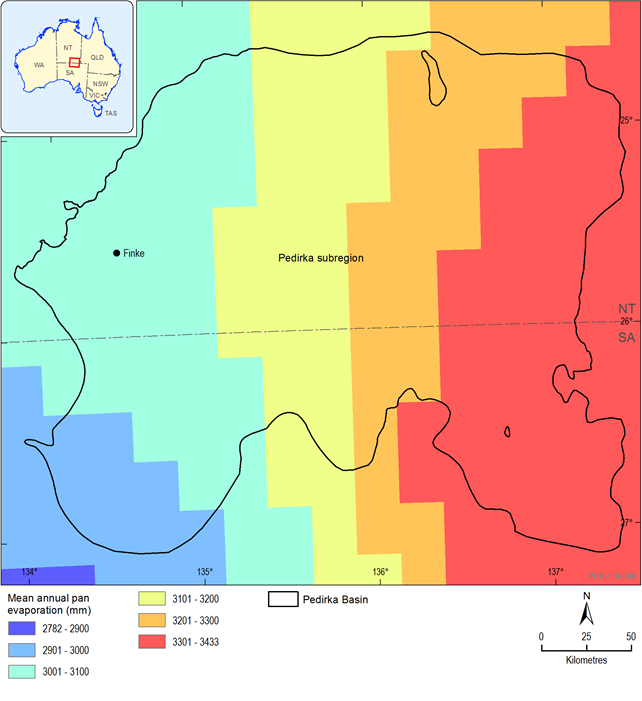 Until recently, there has been no dedicated research towards assessing the impacts of a changing climate over the Pedirka subregion. Information produced through the Australian Climate Change Science Program has demonstrated that it is very likely that mean annual rainfall totals will decrease in future and that mean temperatures will increase in the region. These findings are summarised in Figure 13 and Figure 14 respectively. It can be seen that median annual rainfall totals may fall by between 5% and 20% by 2050, with temperatures increasing by 1°C to 2.5°C by the same time horizon. Increasing temperatures will lead to increased PET, which when considered with likely decreases in rainfall will have a compounding effect in reducing runoff in the subregion. 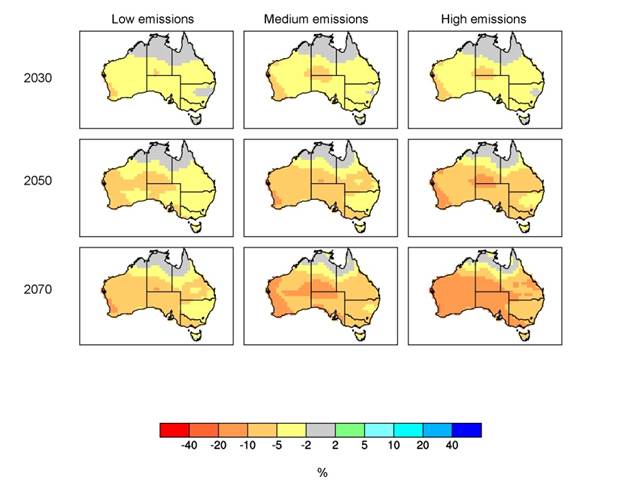 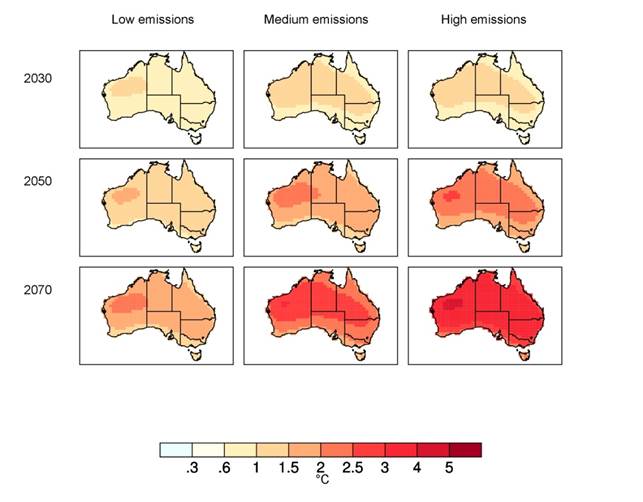 The South Australian Government, through its Impacts of Climate Change on Water Resources Project, has recently undertaken an analysis of groundwater recharge, surface water runoff and rainfall intensity data in the South Australian Arid Lands Natural Resources Management (SAALNRM) region. This project was undertaken to determine the potential impact of climate change on the principal water resources of this region (Gibbs et al., 2012). The SAALNRM region encompasses a large portion of the north-east of SA that borders with the NT and Queensland and is inclusive of the South Australian portion of the Pedirka subregion. This report found that rainfall decreases of the kind suggested by CSIRO et al. (2007) across the NRM region led to even more significant decreases in annual runoff totals, in the order of a 1% decline in annual rainfall representing a 2% decline in annual runoff. Gibbs et al. (2012) also determined that in the Neales-Peake catchment (see Section 1.1.5.1.1), the length of time between flow events increased in line with rainfall declines, (i.e. a 10% reduction in annual rainfall led to a 10% increase in average length of dry periods) a statistic potentially more important given the intermittent nature of flow events in the subregion.