Sedimentary rocks within the Amadeus Basin represent deposition over a time period between Neoproterozic and the Early Carboniferous and are typically marine siliciclastic and carbonate units. The Amadeus Basin can be divided into a number of sub-basins for which the stratigraphy has been mapped in detail from past hydrocarbon exploration activity. However, the stratigraphy of the south-eastern basin is the focus here given its relationship to the Pedirka Basin. In particular, the Mereenie Sandstone and units within the laterally equivalent Finke and Pertnjara groups are discussed. The Finke and Pertnjara groups were both deposited during the Late Devonian. Formations within the Finke Group (Alley and Gravestock, 1995; Geoscience Australia, 2012; Gravestock, 1995) include: 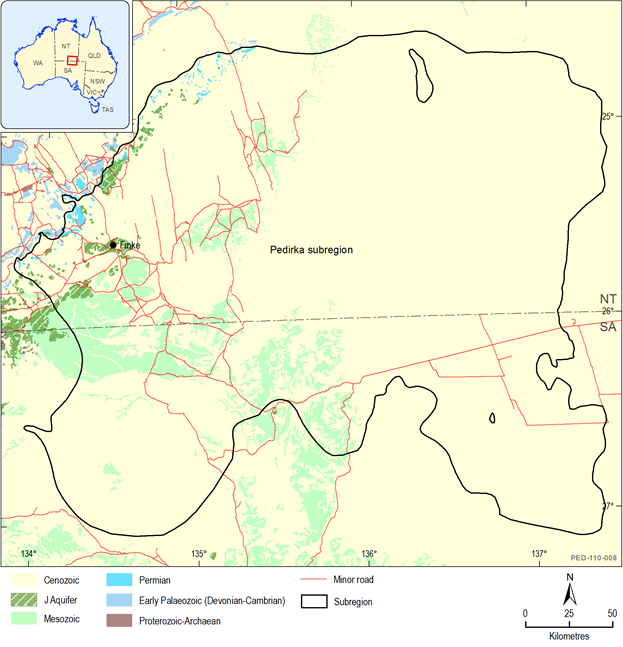 Stratigraphic equivalents within the Pertnjara Group include the Parke Siltstone, Hermannsberg Sandstone and Brewer Conglomerate (Geoscience Australia, 2012; Young and Ambrose, 2005). The Mereenie Sandstone has been interpreted as unconformably underlying the Finke Group in SA (Alley and Gravestock, 1995), as well as the Parke Siltstone of the Pertnjara Group in the NT (Young and Ambrose, 2005). However, Geoscience Australia (2012) placed the Mereenie Sandstone within the Pertnjara Group. The Mereenie Sandstone consists of a pinkish white fine- to medium-grained, minor cross-bedded quartz sandstone and gritty bands and notable concentrations of minerals such as zircon, microcline and tourmaline interpreted to be deposited within an aeolian deltaic shallow marine environment (Alley and Gravestock, 1995). Below the Mereenie Sandstone is the Carmichael Sandstone and units of the Larapinta Group including the Pacoota Sandstone, a pale, fine- to coarse-grained quartzitic sandstone with fossils indicative of deposition within an Ordovician marine environment (Alley and Gravestock, 1995).

Sedimentary rocks of the Warburton Basin are primarily Cambrian to Ordovician, although Devonian-aged sediments within the Finke Group are present in the NT. Gravestock et al. (1995) presented evidence for five separate depositional sequences in the Warburton Basin, although the depositional record has not necessarily been completely preserved. Simplistically, these sequences include a basal suite of shallow marine sediments, followed by a marine prograding sequence through to deep marine organic-rich limy mudstone and shale. A marine regression sequence then follows into a shallow marine sequence. Additionally, volcanolithic units occur (Gravestock, 1995; Radke, 2009). A paucity of exploration has meant that only a few formations have been named to date (Radke, 2009): 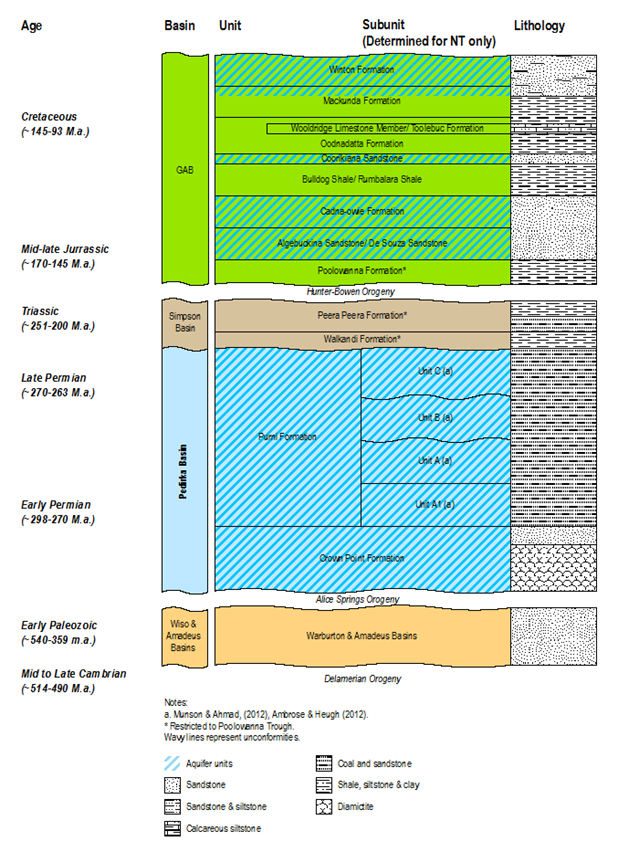 The Crown Point Formation (Wells et al., 1966) consists of glacio-fluvial and glacio-lacustrine sandstone and shale. The formation unconformably overlies sedimentary rocks associated with the Early Paleozoic Amadeus and Warburton basins and underlies the Purni Formation. The formation comprises extensive diamictite, conglomerate, fluvioglacial and glacio-lacustrine sandstone, ripple-laminated sandstone and siltstone, and clay-rich rhythmite (Giuliano, 1988). Coarser grained rocks such as conglomerate, coarse sandstone and diamictite are associated with depositional highs, whereas finer grained mudstone is more commonly associated with basinal lows such as the Eringa Trough (Hibburt and Gravestock, 1995). The lithological similarity between the Crown Point Formation and Boorthanna Formation in the Arckaringa Basin has led to the interpretation that these formations are lateral equivalents (Alexander and Jensen-Schmidt, 1995).

A well-sorted sandstone that occurs at the top of the Crown Point Formation is typically used as a marker for the end of glaciation. Several workers (Ambrose and Heugh, 2012; Ambrose 2006 and Munson and Ahmad, 2012) have considered this sandstone as a distinct formation and have named it the Tirrawarra Sandstone, suggesting it is the equivalent of the Tirrawarra Sandstone in the Cooper Basin. After logging of core from Mount Hammersley 1, New (1998) subdivided the Crown Point Formation into three sub-units on the basis of lithological variation and log character. The basal unit (Unit C) consists of sandstone with interlaminated and interbedded siltstone. The middle unit (Unit B) consists predominantly of siltstone and claystone, whereas the uppermost unit (Unit A) consists of sandstone and interbedded siltstone.

Spatially, the Crown Point Formation is widespread and outcrops along the north-western margin of the Pedirka Basin where it borders the Newland Ranges. With respect to palynological interpretation, the Crown Point Formation has been assigned to zone PP1 (Asselian), although a broader Late Carboniferous to Early Permian age has also been ascribed (Munson and Ahmad, 2012).

The Purni Formation (Youngs, 1975) disconformably underlies Jurassic rocks of the Eromanga Basin in the western Pedirka Basin, and underlies Triassic Simpson Basin strata in the eastern half and deeper parts of the Eringa Trough. The Purni Formation consists of fluvial and paludal (swamp) interbedded sandstone, siltstone and claystone, as well as coal beds within the paludal sequences. Youngs (1975) and Hibburt and Gravestock (1995) suggested that the South Australian occurrence of the Purni Formation can be further subdivided into three sub–units based on the proportion of carbonaceous shale, lenticular or cross-bedded sandstone and coal seams. The upper and lower units are dominated by carbonaceous shale and coal respectively, whereas cross-bedded sandstone predominates in the middle facies.

Conversely, in the NT, Ambrose and Heugh (2012) and Munson and Ahmad (2012) described four sub–units (Units A1, A, B and C) based on facies description, palynology, and coal seam correlation:

A similar characterisation of four sub-units (Units I to IV) was first proposed by Faridi (1986). As well as discriminating between subgroups, Munson and Ahmad (2012) described how palynological work has extended the Purni Formation to cover most of the Permian time period, whereas most previous interpretations had this unit restricted to the Early Permian (Sakmarian). Consequently, those interpretations that broadly describe the Purni Formation as the lateral equivalent of the Mount Toondina Formation (e.g. Youngs, 1975) require review. They suggest that with further work, the Purni Formation could be elevated to Group status, with the identified sub-units reclassified as formations in their own right. Similarly, further work is required to correlate sub-formational units in the NT and SA portions of the Pedirka Basin.

The Simpson Basin overlies the eastern extent of the Pedirka Basin and consists of two sedimentary formations: the Walkandi Formation and Peera Peera Formation. The Peera Peera Formation overlaps conformably above the Walkandi Formation and consists of three main facies. The lowest facies type consists of grey shale, siltstone, minor sandstone and coal, the middle facies comprises fine-grained sandstone and the uppermost facies is composed of a black carbonaceous silty shale. The depositional environment is interpreted to be fluvial-floodplain-lacustrine and therefore, will have inherent heterogeneity (Questa, 1990).

The Walkandi Formation consists of beds of red-brown shale, green siltstone and fine-grained sandstone of possible lacustrine origin (Moore, 1986) and is largely restricted to the Poolowanna Trough region at the centre of the Pedirka Basin. Work presented by Questa (1990), Ambrose and Heugh (2012) and Munson and Ahmad (2012) suggested that the Simpson Basin sequences should be included as part of the Pedirka Basin; abandonment of the name ‘Simpson Basin’ is suggested, with Questa (1990) suggesting that group status within the Pedirka Basin sequence be more appropriate. It is also noted that the Australian Stratigraphic Units Database (Geoscience Australia, 2014) discusses these Triassic units as part of the Pedirka Basin. However, for the purposes of this report, these stratigraphic units are considered as separate basin as proposed by Hibburt and Gravestock (1995).

Directly overlying most of the Pedirka Basin is the Eromanga Basin. Krieg et al. (1995), Ollier (1995), Toupin et al. (1997) and Wopfner and Twidale (1967) described the formation of the Eromanga Basin as being triggered after general uplift within central Australia during the Triassic that coincided with continental down-warping to the north-east. Consequently, variations in either basin subsidence or up-warp and global sea level changes during the Mesozoic led to the development of a series of transgressional alluvial, fluvial and marine sequences. Primary facies changes, especially across basement highs, give rise to complex hydrostratigraphy (Keppel et al., 2013).

The Eromanga Basin is synonymous with the sedimentological extent of the Great Artesian Basin (GAB) throughout the Pedirka subregion. The GAB has been referred to as both a geological basin and hydrogeological basin. Geologically, the GAB describes a terrestrial to marine Jurassic- Cretaceous super basin that covers much of eastern and central Australia (Keppel et al., 2013). A number of GAB aquifers and confining layers exist in the Pedirka subregion (Table 4).

The most recent phases of sedimentation have been primarily deposited as episodic braided fluvial and lacustrine sediments. Cenozoic sedimentation may be divided into two depositional episodes; sedimentation that occurred during the Paleogene and Neogene periods, prior to upwarping at 15 to 5 Ma and those associated with the current hydrological system. The Cenozoic sediment may provide discrete aquifers in areas covered by the Lake Eyre Basin. In the vicinity of the Pedirka subregion, Cenozoic sedimentary basins include the Lake Eyre (geological) Basin, Aremra Basin and Hamilton sub-basin.

Sediments associated with the Lake Eyre (geological) Basin were primarily deposited in three phases of episodic braided fluvial and lacustrine sediments. Sediments are generally less than 200 m thick, although thicknesses >350 m occur in places (Drexel and Preiss, 1995), and occupy a large area in the north-east corner of SA and the south-east corner of the NT.

Sediments within the Lake Eyre (geological) Basin have been described in most detail to date. The Eyre Formation is the oldest sequence, deposited during the Late Paleocene and the Mid Eocene. Sediments consist of mature, pyritic carbonaceous sand. The Namba Formation and lateral equivalents represent the middle phase of sedimentation which occurred between the mid-Oligocene and Pliocene. Sedimentation consists largely of white, green and grey clay, fine-grained sand and carbonate with minor conglomerate. The Wipajiri, Tirari and Kutjitara formations and the Simpson Sand are the names given to Pliocene to Quaternary aged sediments in the Kati Thanda – Lake Eyre region and areas north (Callen and Benbow, 1995). These sediments largely consist of red-brown arenite, fine-grained lacustrine sediments, aeolian and evaporite sediments, as well as calcrete and gypcrete horizons.