Hydrochemistry data are only available for 21 wells screening the Crown Point aquifer, all of which are located on the north-west margin of the Pedirka Basin (Figure 26). The salinity of groundwater samples ranges from 93 to 7910 mg/L with an average water quality of 2470 mg/L. Lowest salinity groundwater is encountered in wells adjacent to the Finke River and Goyder Creek, where five wells contain potable groundwater (salinity <500 mg/L). It is currently speculated that the Finke River may provide recharge to the Crown Point Formation, although this requires further work to substantiate. The salinity is greatest in the northernmost wells where it approaches 8000 mg/L, exceeding the recommended guideline for beef cattle with no loss of production or condition (5000 mg/L, ANZECC & ARMCANZ 2000). Outside the north-west region of the basin only drill stem tests (DST) from oil exploration wells provide a semi-quantitative measure of groundwater quality. Six chemical analyses from DST’s undertaken in the central and eastern region of the basin report a salinity range of 1100 to 15,000 mg/L with an average of 8900 mg/L. There are limited data available beyond major ion chemistry and physical parameters for the Crown Point Formation and no hydrochemistry data available for the Purni Formation. 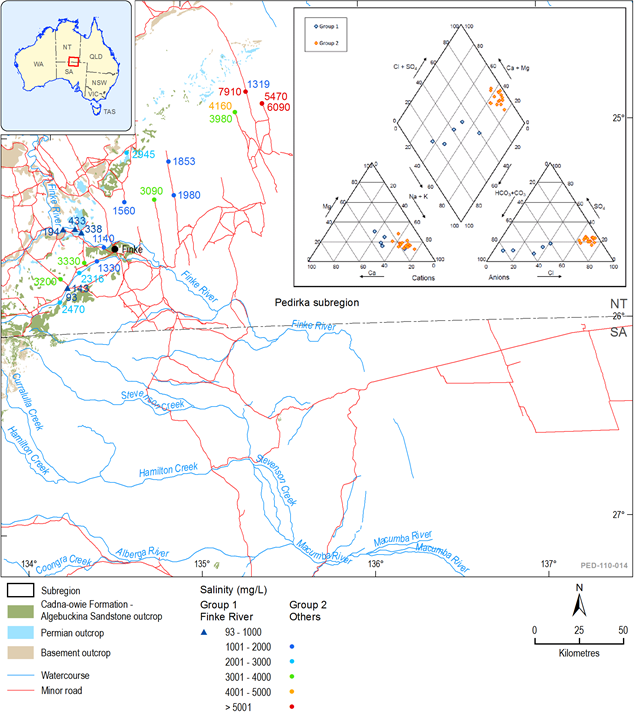 Groundwater in the J aquifer emanating along the western margin of the GAB has a sodium-chloride-sulfate (Na-Cl-SO4) water type that is distinct from the sodium-chloride-bicarbonate (Na-Cl-HCO3) ionic signature characteristic of water derived from the eastern margin (Habermehl, 2002). Salinity from the J aquifer within the Pedirka Basin ranges from 240 to 5100 mg/L, spatially the lowest salinities occur around the recharge zone of the Finke River. This area and the recharge zone along the Plenty River north of the Pedirka Basin are also characterised by lower chloride, cation and bicarbonate concentrations. There is a pronounced trend of increasing cation and chloride concentrations along flow path away from the western margin and toward the regional discharge features of Dalhousie Springs and Kati Thanda – Lake Eyre (Smerdon et al., 2012). Groundwater quality in the K aquifer is much more variable, ranging from less than 1000 to in excess of 100,000 mg/L (Love et al., 2013b).

Isotope hydrology supports the flow patterns and directions determined from hydraulic head data. Modern groundwater has been identified through the use of 14C, sulfur hexafluoride (SF6) and chlorofluorocarbons (CFCs) around the Finke River and the Plenty River indicating active, modern recharge to the J aquifer (Love et al., 2013b). Away from the basin, margin studies have used a range of isotopic techniques including chlorine-36 (36Cl), helium-4 (4He) and krypton-81 (81Kr) to determine groundwater residence times for groundwater in the western GAB. Estimates range from 225,000 years (Collon et al., 2000) to over 2,000,000 years (Torgersen et al., 1991).

The J aquifer provides the primary water source for pastoral enterprise in the Pedirka subregion and also the town water supply for Indigenous communities, outstations and domestic supply for pastoral homesteads. From an environmental perspective, the J aquifer is the source of water for the iconic western margin GAB springs. The most significant with respect to discharge volume is Dalhousie Springs, which is located just beyond the southern margin of the Pedirka Basin. Love et al. (2013a) determined that Dalhousie Springs is sustained by water recharged along the western margin of the GAB. In addition Wolaver et al. (2013) presented evidence that Permian aquifers could also be contributing some groundwater discharge at Dalhousie Springs and Ransley et al. (2012) suggested groundwater discharge within the Dalhousie Springs region may also be sourced from Finke River bed underflow.

Water quality in the Cenozoic aquifers is highly variable; salinities ranging from 300 to 10,240 mg/L with an average concentration of 2380 mg/L. The presence and quality of groundwater in the shallow alluvial aquifers in particular, is strongly influenced by surface water processes and is highly variable at a local scale. Potable water often halos watercourses (e.g. Finke River) but deteriorates in quality rapidly with distance from the river (Fulton, 2013). The alluvial aquifers also provide a conduit between the surface water processes and the GAB aquifers (see the Plenty River case study in Love et al., 2013b). Areas where good quality groundwater resources occur in Cenozoic aquifers include the Hamilton sub-basin in SA, the mid regions and flood-out of the Finke River, and the Indida and Andado swamps in the NT. The flood-outs and swamps represent important ecosystems and shallow aquifers underlying these areas are likely to help sustain vegetation between infrequent flood events. Several paleovalley deposits have been identified on the Geoscience Australia Paleovalley Map (Bell et al., 2012), however, little is known about the water quality attributes of groundwater in these aquifers.