A time composite potentiometric surface constructed from 21 groundwater levels and five DST formation pressures has been used to infer generalised flow directions within the Pedirka Basin (Figure 27). The regional groundwater flow direction is to the south-east, with flow emanating from the north-west margin of the basin, an area that coincides with the surface expression of the Crown Point Formation. This flow pattern suggests that the Permian aquifer either receives active recharge or recharge has occurred along this margin under wetter climates in the past; under the second scenario, the groundwater flow pattern would reflect a paleo-head distribution. The highest groundwater elevations occur where the Finke River flows through a region of outcropping Crown Point Formation and suggests potential recharge interaction between the river and the Permian aquifer.

Data coverage is very poor over most of the Pedirka Basin except for the north-west margin. The Dalhousie-McDills Ridge is a major structural feature bisecting the centre of the basin, which may cause flow partitioning within the Permian aquifer. Unfortunately, the data density is too low to prove or disprove the influence of this feature. Likewise, data coverage is too poor to discern the groundwater flow pattern along the south-west margin around the Dalhousie Springs complex. DST data in the east of the basin infers a flow direction from the centre to the south-east extension of the basin. The basin is very deep in this area and is overlain by 2000 m of Cretaceous and Jurassic sediments. Due to the burial depth it would seem more likely that any terminal discharge from this area would take the form of formation throughflow, rather than spring flow or other surface expression.

Recharge is postulated to occur through two mechanisms: direct infiltration of rainfall (diffuse recharge) and focused recharge where surface water features contact the Permian aquifer in either outcrop or sub-crop (Figure 28). A saturated chloride mass balance (CMB) approach estimated diffuse recharge along the north-west margin of the basin at between 0.02 and 0.16 mm/year. This is around an order of magnitude less than CMB estimates of recharge to the GAB aquifer in the same area (<0.1–1.5 mm/year, Love et al., 2013b). Results suggest that at present diffuse recharge to the Pedirka Basin aquifers is effectively zero though, given the generalisations and uncertainties characteristic of the data used in the assessment, it must be emphasised that the rates obtained are order of magnitude estimates only. The groundwater chloride, carbon-14 and hydraulic head distribution all suggest that focused recharge is occurring to the Crown Point aquifer through the Finke River and Goyder Creek. Existing data are insufficient to estimate a recharge rate to the Crown Point aquifer through this mechanism or to confidently delineate the recharge zone. Potential also exists for focused recharge along the lower Hale River and Coglin Creek in the NT and headwaters of the Stevenson and Alberga systems in SA.

There is limited information documenting groundwater discharge from the Permian aquifers in the Pedirka Basin. On a regional scale, Love et al. (2013a) suggests the Crown Point Formation, in addition to the GAB, may represent a potential source of discharge to the Dalhousie Springs complex (Figure 28). At a local scale, a series of waterholes identified in the bed of the Finke River in the NT may reflect a small scale flow system with local discharge from the Crown Point aquifer. At present it is not clear whether these discharge features are associated with the Crown Point Formation or the Finke River alluvial system. In addition, the number of waterholes, their size, permanence, water quality attributes, the nature of the connection with the groundwater system and their ecological significance remain unknown. Discharge is also likely to occur as cross-formational flow; however, no studies were identified that characterised the direction or magnitude of this discharge component. 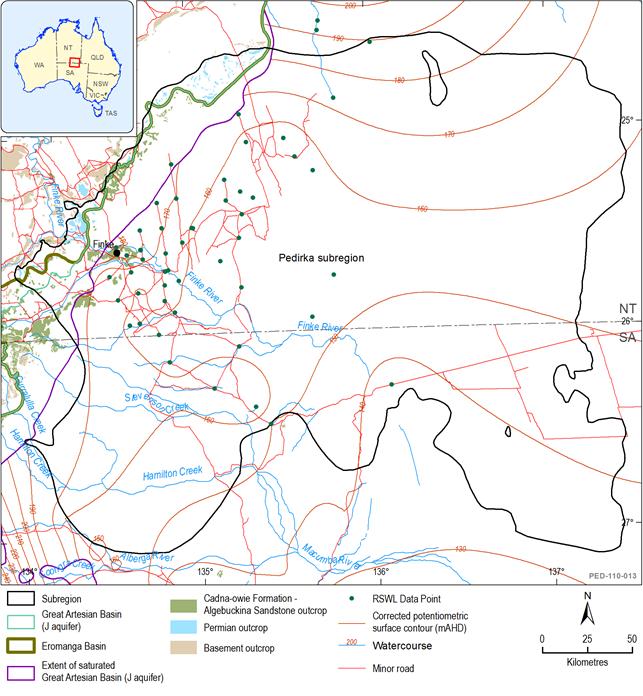 Note: Due to a paucity of adequate results, head data has not been corrected for density or temperature. Potentiometric surface contours for the GAB included for comparison. 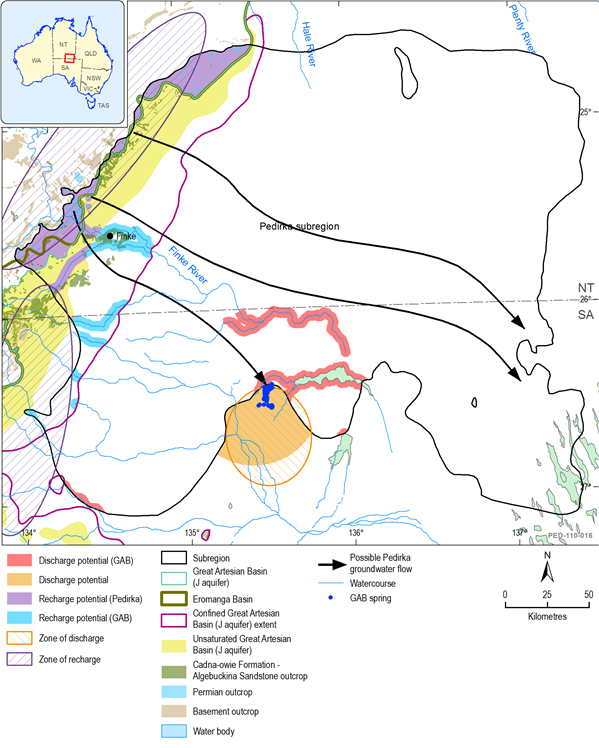 Limited groundwater monitoring and water level data exists for the Cenozoic aquifers, however, they can be reasonably characterised as local aquifers with small scale flow systems. Recharge processes are strongly associated with irregular flooding in the surface drainage network and the ponding of water in swamps and flood-out areas. Little is known about groundwater discharge from the shallow aquifers, though it is probable that these systems sustain semi-permanent waterholes on the lower Finke River between intermittent surface water flows. Groundwater levels in the aquifers are typically shallow (less than 10 m) and discharge will also occur in the form of evapotranspiration from riparian vegetation.

A time composite density corrected potentiometric surface for the J aquifer is presented in Figure 25. The regional groundwater flow direction is to the east and south-east away from the margin of the basin and towards Dalhousie Springs and Kati Thanda – Lake Eyre. Regional groundwater gradients are very low, being in the order of 1:3300. Existing water level data are concentrated in a relatively small area along the western and north-western margin of the GAB. Groundwater flow directions and patterns away from this area should be viewed with a low level of confidence. A groundwater mound is present under the Finke River where it crosses outcropping Algebuckina Sandstone along the western edge of the basin. Local reduced groundwater levels are elevated 10 m to 15 m and local gradients 2-3 times higher than the regional aquifer, clearly indicating a zone of enhanced recharge around the Finke River. Similar features are present along the Hale and Plenty rivers and Illogwa Creek on the northern margin of the GAB.

Recharge processes to the J aquifer along the western margin of the GAB are investigated in detail in Love et al., (2013b). This study concluded that present day recharge rates are much lower than recharge rates in the past, and water stored within the western GAB aquifers represent a legacy of higher recharge rates that occurred during wetter periods in the Pleistocene. The current volume of recharge is considered to be significantly less than current natural discharge; however, contemporary recharge has local significance for the persistence of some GAB springs. Three key recharge mechanisms were identified: diffuse recharge, focused ephemeral river recharge and mountain system recharge. Diffuse recharge rates estimated through groundwater and unsaturated CMB techniques ranged from <0.1 to 1.5 mm/year and indicate that presently there is negligible diffuse recharge entering the GAB aquifer along the western margin. Active ephemeral river recharge was identified along the Finke River and Plenty River. Recharge rates along the Finke River were estimated at between 380 – 850 mm/year, occurring across a recharge zone of approximately 16 km2. Rates along the Plenty River were estimated at 17 to 92 mm/year. This represents a total flux of 13 GL/year, which is minimal in comparison to the magnitude of groundwater flow and storage within the J aquifer. Mountain system recharge was identified around Marla and Denison and Davenport Ranges, it was considered an important source of water for the Proterozoic fractured rock aquifer and dependant ‘recharge springs’, however, its contribution to the J aquifer system is considered negligible.

The J aquifer provides the principal water source for the western margin GAB springs, of which Dalhousie Springs is the most significant to the Pedirka subregion, being located immediately south of the subregion margin. Love et al., 2013b identified mantle derived CO2 in spring discharge water, suggesting that there are potential pathways for fluid migration from deeper systems through to the J aquifer and GAB springs. Groundwater discharge also occurs from the J aquifer to both the overlying K and Cenozoic aquifers via the slow upward leakage of groundwater through massive sections of the Rolling Downs Group aquitard and preferentially through fracture and fault zones. Love et al., (2013a) found the permeability of the shale was so low as to make the rate of diffuse movement effectively zero. Rates of preferential leakage were found to be three orders of magnitude greater but still only equated to a flux of approximately 0.1 mm/year.

No information exists regarding the flow systems, hydrostratigraphic units, or recharge and discharge processes in either the Amadeus Basin or Warburton Basin sequences where they are relevant to the Pedirka subregion.

Both the Purni and Crown Point formations contain coarser grained sediments interbedded with finer grained siltstone shale and mudstone. Therefore, both formations have the capacity to act as either regional aquifers or contain a number of intra-formational aquifers that may be at least partially connected either via fault displacement or hydrogeological similar sediments in contact across unconformities.

Re-interpretation of seismic data presented in Wohling et al. (2013) inferred that Permian sediments are significantly faulted and folded, resulting in vertical displacement or the removal of sediments by erosion. In some instances, the displacement appears to have caused at least localised discontinuity within the Permian sequence; this being particularly evident in the vicinity of the Dalhousie-McDills Ridge. This feature may have led to the formation of partially disconnected hydrogeological sub-basins within the Permian sediments.