The groundwater flow systems in the Gippsland Basin are complex as a result of variability in litho-stratigraphy and hydraulic properties. Some aquifers extend over large areas, and partly into the offshore parts of the basin, through complex geological structures. Other aquifers are only of local extent (Schaeffer, 2008). The lithologies of the regional aquifer systems are relatively consistent in a north-south direction across the onshore portion of the basin. However, from west to east, the lithologies vary from being predominantly coal rich, to a sandy sequence and then predominantly limestone and marl (Schaeffer, 2008). The flow systems of the Moe Swamp and Tarwin sub-basins are less complex than the Gippsland Basin, as the sedimentary depositional environments have been terrestrial only in these sub-basins. 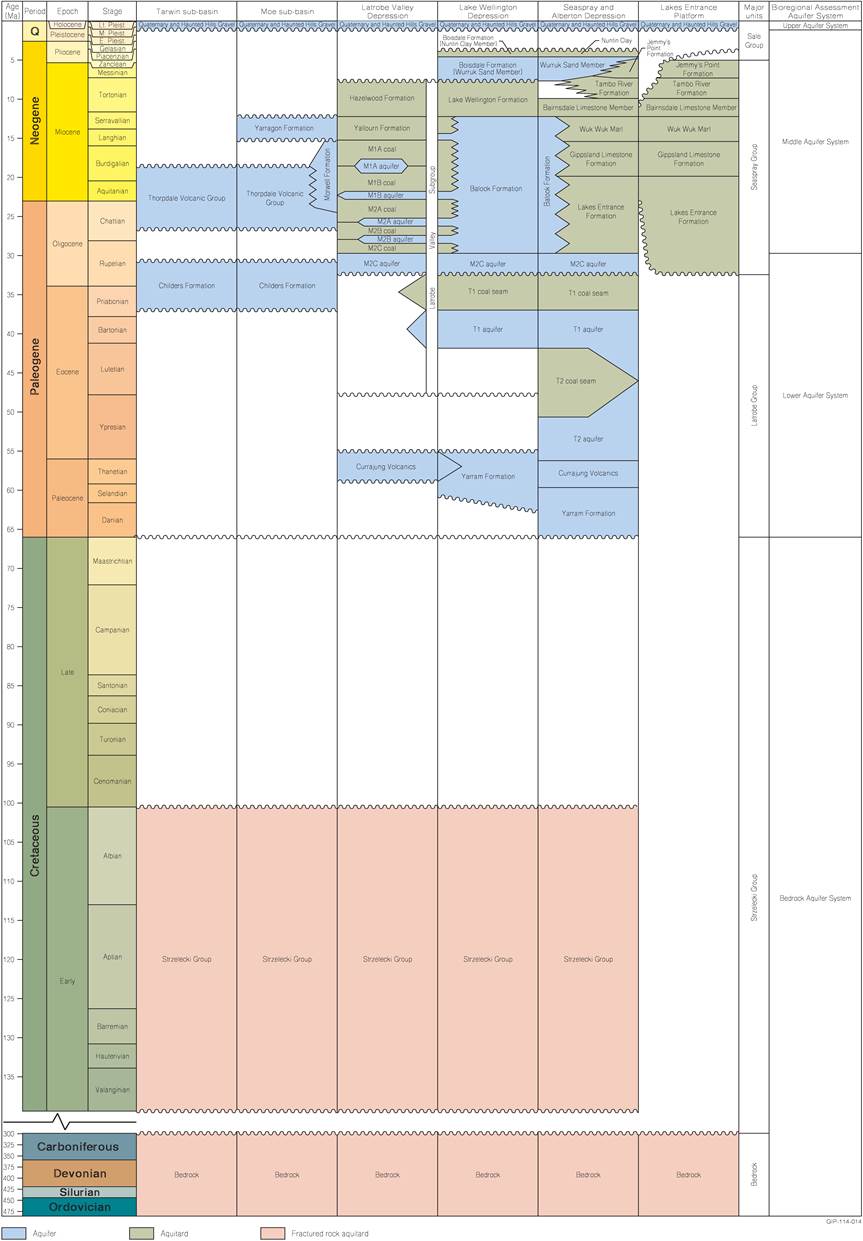 Figure 22 Hydrostratigraphy of the Gippsland Basin, and Moe Swamp and Tarwin sub-basins

The Cretaceous age Strzelecki Group and the Paleozoic rocks are often referred to as groundwater basement due to their low matrix permeability. Most of the outcropping bedrock comprises Silurian-Devonian metasediments, Devonian granites and Cretaceous sediments. While not transmitting large quantities of groundwater in the Gippsland Basin, the bedrock aquifers are known to maintain baseflow in many of the streams and rivers in the Gippsland Basin bioregion (Nicol, 2010). Groundwater flow through the bedrock aquifers is generally via fractures, however some matric flow may occur where significant weathering of the rocks has occurred. Fracture porosity generally decreases with depth such that groundwater resources are generally limited to the upper 150 m of the units (Walker and Mollica, 1990). Bore yields are typically less than 1 L/second but are highly variable over short distances. Yields are typically lower in the granite bedrock (less than 0.5 L/second).

Walker and Mollica (1990) stated that the major fault movements within the Strzelecki Group have taken place along near vertical faults and higher transmissivities may occur within these zones. Walker and Mollica (1990) also stated that there is likely to be more fracturing within the Paleozoic rocks, relative to the Strzelecki Group, due to their significantly older age and therefore greater exposure to fault movements.

The groundwater system of the Strzelecki Group outcrops mainly in the Strzelecki Ranges. A small area of outcrop is also found to the north of Yallourn as well as to the south of Leongatha where it also subcrops in places beneath a thin veneer of Cenozoic sediments (Walker and Mollica, 1990).

The lower aquifer system extends over most of the onshore Gippsland Basin as well as extending offshore. Included in this group are the Latrobe Group sediments and the Thorpdale and Currajung volcanics. These are non-marine sediments deposited in alluvial-fluvial, fluvial-deltaic and paralic environments and include thick sandstones, shales, mudstone, coal and volcanics. The Latrobe Group sediments are generally not visible in outcrop, while the Thorpdale and Currajung volcanics outcrop extensively.

Onshore, the Latrobe Group has been subdivided into two aquitards and two aquifers: the T1 coal, overlying and confining the T1 aquifer; and the T2 coal, overlying and confining the T2 aquifer (Schaeffer, 2008). These aquifers are generally high yielding (up to 100 L/second) and of good quality, forming the most reliable groundwater source in the onshore part of the Gippsland Basin (Hatton et al., 2004). The T1 aquifer is regionally extensive, present in the Latrobe Valley Depression from east of the Morwell Monocline, and throughout most of the Gippsland Basin. The T2 aquifer also occurs across most of the Gippsland Basin, however it is less prominent than the T1 aquifer in the Latrobe Valley Depression, and more prominent further east and south of the Rosedale Fault (Schaeffer, 2008). The T1 and T2 aquifers are generally composed of sand, gravel, clay, minor coal and volcanics (Schaeffer, 2008). The aquitards are not explicitly defined as specific units in the VAF, however they can be thought of as lower permeability units within the lower Tertiary aquifer of the VAF and are important for local-to-regional scale groundwater flow. The T2 aquitard is not regionally extensive. The T1 aquitard is regionally extensive and therefore the principal confining unit within the lower Tertiary aquifer system (Nicol, 2010). Isopachs of the T1 and T2 coal seams were mapped by Holdgate et al. (2000). The composition of the T1 and T2 aquitards is mainly coal with minor gravel, sand, silt and clay (Schaeffer, 2008).

The M2C aquifer (the basal unit of the Morwell Formation) and its facies equivalent, the Seaspray Sand can also be grouped into the lower aquifer system. The M2C aquifer (and its lateral equivalents) extend from the Moe Swamp sub-basin in the west (where it is called the Childers Formation), to the Bairnsdale or Lakes Entrance area (where it is called the Seaspray Sand), effectively passing beneath, but in direct hydraulic contact with, the Balook Formation. The M2 equivalents also extend offshore. Onshore, it is present in the Latrobe Valley, the Lake Wellington Depression and the Seaspray Depression. The Childers Formation (M2 equivalent) also occurs in the Tarwin sub-basin. The M2C aquifer is composed of sand, clay and gravel (Schaeffer, 2008).

Equivalents of the M2C, T1 and T2 aquifers extend into the offshore Gippsland Basin (Schaeffer, 2008).

The Latrobe Group sediments are up to 100 m thick in the Latrobe Valley and thicken in an offshore direction to more than 3000 m. Their maximum onshore thickness is 1000 m (Hatton et al., 2004), in the Seaspray Depression. The depth to the aquifer system also generally increases towards the coast away from the basin margins, except in the region of the Baragwanath Anticline and Rosedale Fault where the sediments have been uplifted so that they subcrop at a relatively shallow depth (Nicol, 2010).

Offshore, the Latrobe Group aquifers are the reservoir rocks for the giant oil and gas fields of the Gippsland Basin. Coal mine depressurisation in the Latrobe Valley Depression and the offshore oil and gas developments are the major users of the water resources of the lower aquifer system. The Thorpdale and Currajung volcanics are also important aquifers and are considered part of the lower aquifer system. Hydraulic conductivities in the Thorpdale Volcanics range from less than 1 to 18 m/day. They are generally high-yielding aquifers with permeable structures, such as joints, fissures, fractures and interfaces between basalt flows (Hofmann, 2011).

The middle aquifer system transitions between three regions in the onshore portion of the Gippsland Basin with relatively distinct hydrogeological properties. In the east (near Orbost) and the south, the system is dominated by marine rocks, limestones and marls of the Seaspray Group. Heading west and north towards the Latrobe Valley Depression, the sandstone of the Balook Formation (deposited as barrier sands with interbedded clays) dominates the system. Heading further west and north into the Latrobe Valley Depression, alluvial and fluvial sediments, sandstones, coal, siltstones and shales of the Latrobe Valley Group dominate. Note that the Latrobe Valley Group sediments are younger in age than the Latrobe Group sediments and are geologically and hydrogeologically distinct (see Figure 20 of Section 1.1.3.2).

The marine rocks in the east: the Lakes Entrance Limestone, Gippsland Limestone and Wuk Wuk Marl, are classified as relatively poor aquifers or aquitards. The Lakes Entrance Formation is generally described as a leaky aquitard onshore. It is described as a regional seal in the oil and gas and carbon dioxide sequestration literature, e.g. Goldie Divko et al. (2009), for the offhsore part of the basin. The Lakes Entrance Formation is thought to thin in the northern region of the Gippsland Lakes, potentially accommodating upward flow of groundwater from the lower aquifer to the middle aquifer system (Varma and Michael, 2012). The Gippsland Limestone is a low hydraulic conductivity confined aquifer, although sandier sheets and horizons may have higher conductivity, yielding up to 10 L/second, but typically less than 2 L/second (Minchin, 2010). The Wuk Wuk Marl is a poor (low yielding) aquifer. The marine sediments are utilised for stock and domestic water supply in a few areas on the Lakes Entrance Platform and to a limited extent around the Baragwanath Anticline. The VAF groups these formations together as an aquitard – the ‘upper middle Tertiary aquitard’.

The Balook Formation extends north-north-east for 150 km across the Seaspray and Lake Wellington depressions, except in the area of the Baragwanath Anticline (Nicol, 2010). It has limited lateral extent (about 30 km) but is important in providing vertical connection between the lower aquifer system and the middle and upper aquifer systems (Hofmann and Cartwright, 2013; Nicol, 2010). It also provides lateral connection between the Morwell Formation in the west and the Lakes Entrance Formation in the east, and the Yallourn Formation in the west and the Gippsland Limestone in the east (Hofmann and Cartwright, 2013). Balook Formation thickness is mapped up to 500 m, but due to limited lateral extent this unit is not well developed as a resource.

Also grouped in the middle aquifer system are middle-to-late Miocene age sediments including the Boisdale (Wurruk Sand Member) and Jemmys Point formations, and in the Latrobe Valley Depression, the Hazelwood and Yallourn formations.

The Boisdale Formation (Wurruk Sand Member) is a fluviatile sand aquifer. It extends across much of the Gippsland Basin: in the Lake Wellington Depression from Paynesville in the east to Briagolong in the north, Rosedale in the north-west; and across the Seaspray and Alberton depressions, from the Lake Wellington area, to near Yarram in the south-west (Nicol, 2010). The Boisdale Formation thins in the east and is absent in the Lakes Entrance area (Nicol, 2010). The Boisdale aquifer (Wurruk Sand Member) is confined to semi-confined by either the Boisdale Formation (Nuntin Clay Member) or by clays within the overlying Haunted Hills Gravel. It is highly permeable, particularly around Sale, where it is used for urban water supply and irrigation (Nicol, 2010).

Quaternary sediments form surficial aquifers over low-lying areas of the Gippsland Basin. The sediments are of alluvial and coastal origin, with the main aquifers developed in beach and dune sands, and sand and gravel formed by the paleodrainage of major rivers in the region. Extensive Quaternary deposits form productive aquifers in the valleys of the Mitchell, Avon, Thomson, Macalister and Latrobe rivers where these rivers, and their paleochannels, have traversed the Gippsland plains (Walker and Mollica, 1990). In the region bounded roughly by Maffra, Heyfield, Rosedale and Sale, the paleochannels of the Thomson, Avon, Macalister and Latrobe rivers have tended to coalesce, forming an area of significant aquifers made up of interfingering zones of coarser grained and finer grained sediments (Walker and Mollica, 1990). The aquifer associated with the Mitchell River is generally limited to a long narrow valley west of Bairnsdale.

The Quaternary sediments extend outside the boundary of the Gippsland Basin. In these areas, the sediments overlie shallow Paleozoic basement to depths of around 50 m. Sand and gravel layers form unconfined aquifers, usually approximately 5 to 15 m thick with variable yields but typically less than 5 L/second (Nicol, 2010). The Haunted Hills Gravel overlies the Yarragon Formation in the Moe Swamp sub-basin and overlies the Thorpdale Volcanics in the Tarwin sub-basin. In the Tarwin sub-basin, the Haunted Hills Gravel and the Thorpdale Volcanics form a single unconfined aquifer (Nicol, 2010).

Quaternary dune and beach sand deposits along the present coastline form aquifers that are utilised for town water supply at Venus Bay, Loch Sport and Sandy Point. In these near-shore aquifers, shallow bores exploit freshwater lenses that wedge out over more saline groundwaters influenced by the sea (Walker and Mollica, 1990).