1.1.3.1.1 Definition of the basin, basin extent and regional geological context

The Gippsland Basin covers an area around 46,000 km2. The basin widens and deepens to the east and about 70% of the basin occurs offshore beneath the present-day continental shelf (Holdgate and Gallagher, 2003). The basin is approximately 400 km long and 80 km wide, extending onshore from the Mornington Peninsula in the west to the edge of the continental shelf in the east. The boundaries of the basin are roughly defined by the Lake Wellington Fault System to the north, the Foster Fault system to the south, the Selwyn Fault to the west (near Western Port) and the Gippsland Rise to the east (Duddy, 2003) (see Figure 17). It is bounded to the north by Paleozoic basement rocks of the Eastern Highlands, to the west by uplifted Lower Cretaceous Strzelecki Group fault blocks and by the Bassian Rise in the south-west which separates it from the Bass Basin. The Gippsland Basin bioregion encompasses the part of the onshore geological Gippsland Basin, east of the drainage divide on the Narracan Block, approximately 14,636 km2.

The Gippsland Basin began to form in the Late Jurassic in response to rifting of the Australian plate at its southern margin (e.g. Norvick et al., 2001). Significant subsidence began in the Early Cretaceous and continued into the Cenozoic, leading to accumulation of up to about 12 km of Cretaceous and Cenozoic sediments in the main depocentres, located in the offshore portion of the basin. Deep extensional faults segment the basin into platforms and terraces with sedimentary thickness markedly increasing toward the offshore Central Deep (Rahmanian et al., 1990). Paleozoic rocks form the basement of the Gippsland Basin, mostly Ordovician to Early Devonian sandstone and shale sequence (turbidites), and are intruded by high level Middle Devonian granites (Webb et al., 2011). 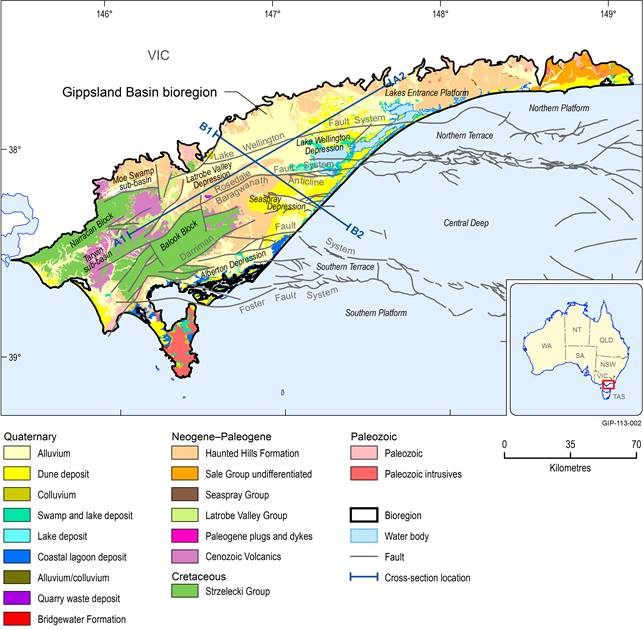 Figure 17 Geology of the Gippsland Basin bioregion including faults and structural elements. Locations of cross-sections A1-A2 and B1-B2 are delineated

The onshore Gippsland Basin is divided into numerous structural elements. These include the Latrobe Valley Depression, Baragwanath Anticline, Seaspray Depression, Alberton Depression, Moe Swamp sub-basin, Lakes Entrance Platform and the Lake Wellington Depression (Hocking, 1976b). These subdivisions have an important control for coal resource distribution and the hydrogeology of the basin, affecting the depositional and erosional history of the basin. They will be referred to extensively throughout the remainder of this section and Section 1.1.4. Offshore, the basin has three major structural elements: the principal basin depocentre of the Gippsland Basin – the Central Deep; flanked in turn by the Northern and Southern terraces (formerly known as the Strzelecki terraces) and the Northern and Southern platforms as shown in Figure 17. The deep water part of the offshore basin (where the water column is greater than 500 m) is poorly defined and will not be discussed further in this report as it is not directly relevant to the Gippsland Basin Bioregional Assessment.

Principal fault trends are dominantly west-north-west in the offshore part of the basin, with fold trends orthogonal at north-east to east-north-east directions (Power et al., 2001). Onshore fold trends tend to align north-north-east to east-west. Significant faulting (mainly reverse) at depth in the onshore part of the basin is commonly expressed in the Eocene to Miocene aged sediments by monoclinal folding and Pliocene topographic uplift (Holdgate and Gallagher, 2003).

The key regional geological structures in the basin are the east-west extensional faults, the Lake Wellington Fault System, Foster Fault System, Darriman Fault System, Rosedale Fault System and the Baragwanath Anticline (see Figure 17). Brief descriptions of these structures are below, with further context including their influence on basin development provided in Section 1.1.3.1.2. There are many more geological structures that are important at local scales within the basin. In the Latrobe Valley Depression the depth to coal and coal seam thickness is greatly influenced by structure, for example penecontemporaneous sediment deposition, erosion and uplift have caused thick coal development over the Loy Yang Dome at shallow depths. Most outcrops of basement rocks are bounded by major faults and commonly form prominent scarps for example, the Strzelecki Group Balook Block is bounded by a number of major faults, including the Budgeree, Balook, Carrajung and Yarram faults (Hocking, 1976b).

Not all these structures are relevant to this analysis, and only those most relevant are described herein. However, the reader is referred to the publications cited throughout for more detail, in particular Bernecker et al. (2003), Cupper et al. (2003), Duddy (2003), Hocking (1976a), Holdgate (2003), and Holdgate and Gallagher (2003).

Lakes Entrance Platform: The Lakes Entrance Platform extends across the northern Gippsland Basin (see Figure 17). It is bounded to the north by outcropping Paleozoic basement and to the south by the Lake Wellington Fault System. Offshore, it merges with the Northern Platform. Rocks of the Strzelecki Group were mostly stripped from the Lakes Entrance Platform by erosion following uplift in the Early Cretaceous. It is unconformably covered by Cenozoic undifferentiated Latrobe Group sediments, by the Seaspray Group and by thin upper Pliocene to Quaternary sediments of the Sale Group.

Baragwanath Anticline: The Baragwanath Anticline is a complex, east-plunging, uplifted structural block with some faulted margins and a number of east-north-east trending subsidiary anticlines and synclines. It forms an anticlinal axis between the Gormandale Syncline extension and the Merrimans Creek Syncline and separates the Lake Wellington Depression to the north from the Seaspray Depression to the south. The core of the structure is the Lower Cretaceous Baragwanath Block which is a buried, down faulted, eastern extension of the outcropping Balook Block (Hocking, 1976b). The Baragwanath Anticline is of Cenozoic age and is the largest anticline structure within the onshore part of the basin. It is overlain by thin Latrobe Group sediments, deposited contemporaneously with uplift (Nahm, 2002).

Compressional movement along these faults occurred during the Eocene (Duddy, 2003), leading to uplift of the Lakes Entrance Platform and the Southern Platform. 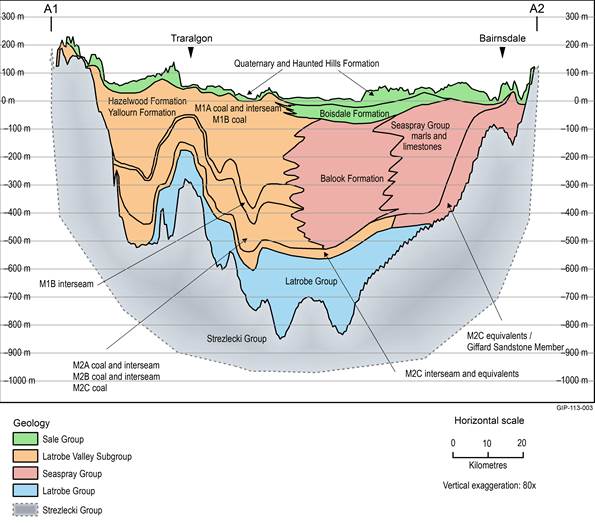 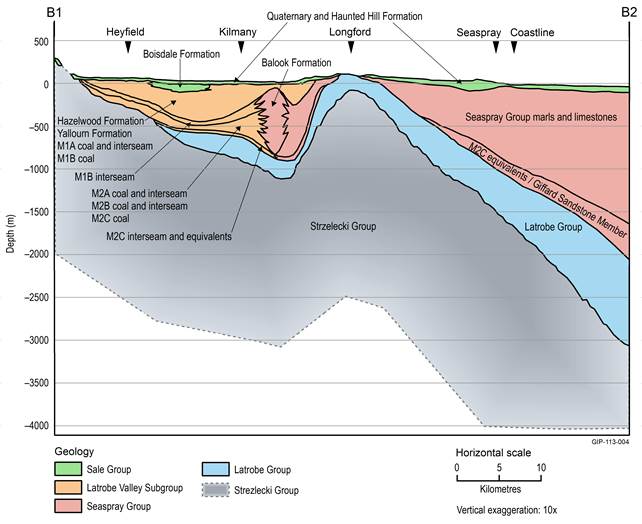