The Gippsland Basin bioregion is situated in south-eastern Victoria and covers an area of approximately 14,636 km2. The bioregion includes the area between the foothills of the Great Dividing Range to the north, and the Bass Strait coast to the south, Warragul to the west, and the Cann River to the east. Although the Gippsland Basin extends into Bass Strait, the Assessment area only covers the onshore part of the basin. Figure 5 shows the topography of the area and the location of the major rivers.

The Strzelecki Ranges make up the central-west section of the bioregion, reaching a maximum elevation of 750 m at Mount Tassie. The ranges are divided from the Victorian Alps to the north by the Latrobe Valley. To the north-east of the ranges the elevation decreases to the lower-lying Gippsland plains, covering the area between Traralgon and Bairnsdale. This area includes floodplains and river valleys leading to the ecologically-sensitive Gippsland Lakes at the northern end of the Gippsland plains. In the eastern section of the bioregion the low-lying plains give way to state forest and dairy interspersed by the towns of Orbost and Marlo. Wilsons Promontory makes up the southern tip of the bioregion and has numerous peaks including Mount Latrobe (754 m), Mount Wilson (705 m), and Mount Ramsay (679 m).

The bioregion covers parts of four river basins: South Gippsland, Mitchell-Thomson Rivers, Snowy River and East Gippsland. The majority of the rivers in the bioregion originate in the Great Dividing Range and flow through the region to the Gippsland Lakes and coast. These include the Avon, Bemm, Brodribb, Latrobe, Macalister, Mitchell, Nicholson, Snowy, Tambo, and Thomson rivers. In addition the Albert River, Tarra River, Bruthern Creek and Merriman Creek originate in the Strzelecki Ranges. Figure 30 in Section 1.1.5 shows the location of the major rivers and catchment areas in the bioregion. 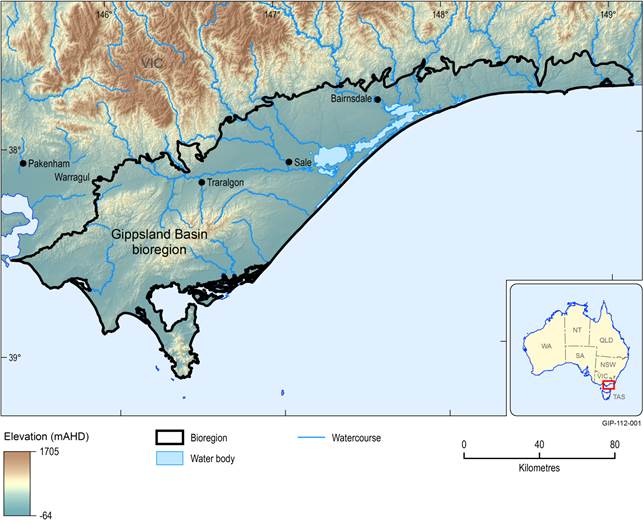 Physiographic regions are areas with consistent landform and geological characteristics. The delineation of them can be useful for understanding wider characteristics of an area, as well as provide information regarding landscape features such as vegetation and soils (Pain et al., 2011). The physiographic regions of Australia have most recently been mapped in 2011 and use a hierarchical structure to define varying levels of physiographic divides. Divisions provide the largest delineation of areas of consistent landform, followed by Provinces and Regions at the smaller scale (Pain et al., 2011). Figure 6 shows the physiographic regions of the Gippsland Basin bioregion.

Table 3 Characteristics of the physiographic regions of the Gippsland Basin 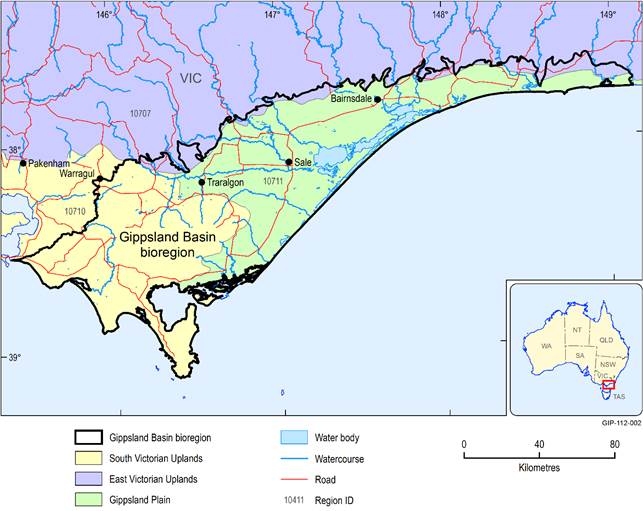 The soil types of the Gippsland Basin bioregion generally align with the broad landscape features, and the underlying geology and physical location. The Australian Soil Classification developed by the CSIRO classifies soils into type based on the soil horizon characteristics and composition, and can be useful in understanding the potential capability of the soil (Isbell, 2002). Soil horizons are the layers parallel to the soil surface. Most soils generally have 3 to 4 horizons, with the characteristics of the soil often changing markedly between them. Generally horizon A (the surface soil below the organic matter), and horizon B (the subsoil, below the A horizon), are the most referred to in the classification. Horizon B is commonly further divided into sub-horizons. Weathered soils often have greater differences between the upper and lower horizons. Eleven soils types are represented across the Gippsland Basin bioregion, their distribution is shown in Figure 7. Table 5 shows the area and percentage of the bioregion covered by each soil type. 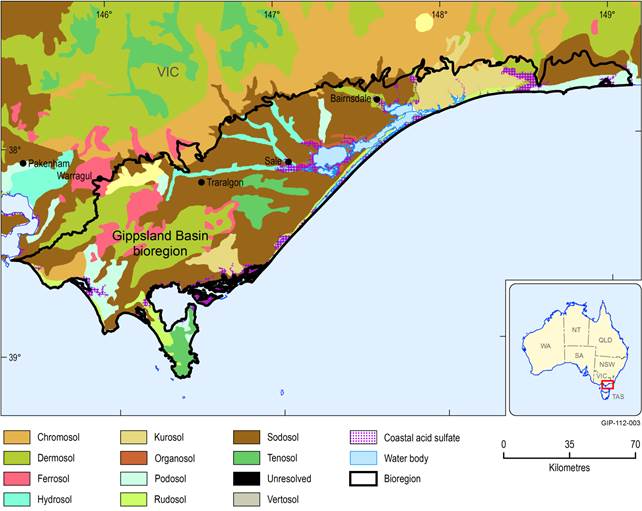 The Gippsland plains, which receive less rainfall than other parts of the bioregion, are covered by Sodosols which have developed on a variety of Tertiary and Pleistocene sediments on the alluvial plains and terraces (Department of Environment and Primary Industries, 2014a). Sodosols are also present below the foothills of the Strzelecki Ranges to the south-west, and to the east of Marlo. They can be classified further into Red and Brown Sodosols, generally on the lower plains, and Yellow and Brown Sodosols on the shallow rises. Sodosols are classed with a strong difference in texture between the A (loamy) and B (clayey) horizons, and having sodic subsoils but not strongly acidic (Isbell, 2002). The high level of sodium results in the soils having a poor structure making them less permeable and susceptible to erosion (Gray, 2002). The Gippsland plains Sodosols are interspersed by Hydrosols (soils that are saturated at least 2 to 3 months per year) which follow the Latrobe, Thomson, Macalister and Avon river valleys and floodplains from the bioregion boundary to the Organosols surrounding Lake Wellington.

Bands of Rudosols have formed on sand dunes along 90 Mile Beach and along the coast east to Marlo. Rudosols have limited soil structure due to them being geologically new and there being insufficient time for a soil profile to develop. North of Marlo the coastal soils change to Podosols due to Aeolian deposition of siliceous sands during the Holocene epoch (Department of Environment and Primary Industries, 2014a). Similar areas of Podosols exists south-west of the Strzeleki Ranges around Inverloch and Venus Bay, and west of Morwell in the Latrobe Valley. Podosols are generally sandy soils with a relatively high amount of organic material in the B horizon (Isbell, 2002). They are highly permeable, and due to this and their low fertility, have limited agricultural potential (Department of Environment and Primary Industries, 2014a).

Between Lakes Entrance and Marlo the soils are primarily Kurosols. Kurosols have strongly acidic subsoils with a pH less than or equal to 5.4 and a clear contrast between the A and B horizons (Department of Environment and Primary Industries, 2014a; Isbell, 2002). They generally have a low agricultural potential due to high acidity and permeability. In the south of the bioregion, surrounding Yarram there is another area dominated by Kurosols.

The Latrobe Valley soils are a mixture of Kandosols, Podosols and Sodosols. Kandosols are permeable, well-drained soils, with limited structure in the subsoils and a clay content of greater than 15%. They appear ‘earthy’ and have low fertility (Department of Environment and Primary Industries, 2014a). They occur on tertiary hills west of Morwell which is a geologically old landscape.

Wilsons Promontory is dominated by Tenosols, although Rudosols have developed in the rocky peninsula isthmus. Beyond the Assessment area to the north, as elevation increases towards the Victorian alpine region, the soils transition to Chromosols. Chromosols have a strong contrast between a loamy A horizon and an upper subsoil clayey B2 horizon which is not acidic and not sodic (Department of Environment and Primary Industries, 2014a).

Much of the soil in the Gippsland Basin bioregion is nutrient depleted due its age and natural weathering. Additionally, soil has been further depleted in some areas from extensive grazing and agriculture over a long period of time causing compaction and erosion of the fertile upper soil horizon. Despite this, the use of fertilisers and irrigation has enabled the region to become highly productive for crops, farming and forestry.

Figure 8 shows the land cover classification across the Gippsland Basin bioregion for the period of 2000 to 2008. The classification has been developed by Geoscience Australia and the Australian Bureau of Agriculture and Resource Economics and Sciences using snapshots of vegetation greenness from Enhanced Vegetation Index (EVI) data from the Moderate Resolution Imaging Spectroradiometer (MODIS) satellites. Using the vegetation greenness from the EVI data, and its seasonal changes, a vegetation or land cover class has been assigned to each location (Lymburner, 2011).

The land cover of the Gippsland Basin bioregion is primarily classed as Trees (closed, open and sparse), Rain-fed Pasture and Irrigated Pasture. Table 5 presents the area and the percentage of the bioregion covered by each class. The Gippsland region is a high producer of dairy and this is reflected in the large percentage of the Assessment area being covered by pasture. The majority of pasture is found in the lower-lying Gippsland plains, and from the Strzelecki Ranges to the western bioregion boundary, including Leongatha and the coastal region. The Macalister Irrigation District, extending down the river valleys from Lake Macalister to Lake Wellington is classified, as expected, as Irrigated Pasture interspersed with Rainfed Pasture. Smaller areas of Irrigated Pasture exist along the Latrobe River, around Orbost, and in the west of the bioregion. The Strzelecki Ranges and Wilsons Promontory are primarily covered by trees, both closed and open, although the relative amounts of plantation and native forest is not consistent between the areas. The Latrobe Valley exhibits a mix of land cover including trees, pasture and sedges. East of Lakes Entrance the land cover is predominately closed trees. The inland water bodies cover 3.5% of the bioregion.

Much of the bioregion has been cleared of native vegetation. The 2001 Nature Conservation Review of Victoria estimated that of pre-1750 vegetation only 21% of the Gippsland plains and 19% of the Strzelecki Ranges remains mainly unaltered by human activity (Porter, 2001). The vegetation of Wilsons Promontory is the only large expanse of the bioregion that has remained unaltered since pre-1750 (Porter, 2001). Much of the removal and modification of native vegetation has been for pasture and forestry. 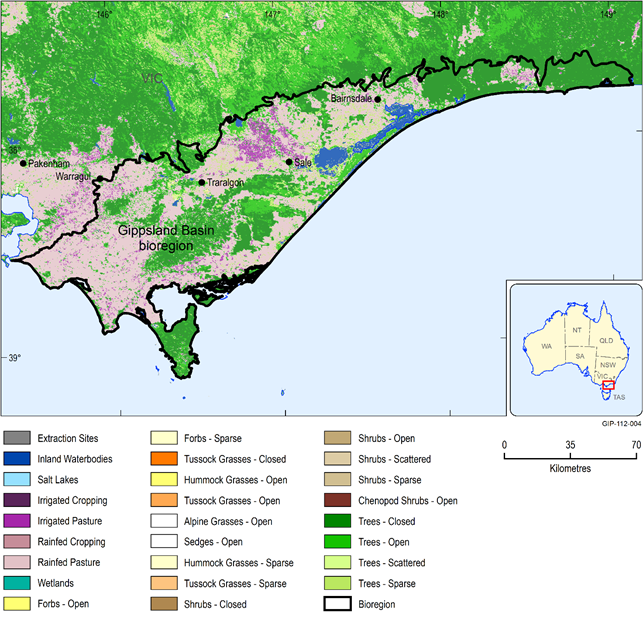