Figure 21 shows the distribution of coal, oil and gas fields of the Gippsland Basin. Multiple resources are viable for development in the Gippsland Basin including groundwater use, hydrocarbon extraction, coal mining and geological storage of carbon dioxide (CO2) (Varma and Michael, 2012). A summary of coal, hydrocarbon and potential CO2 reservoir resources is provided herein. Groundwater is discussed in detail in Section 1.1.4. 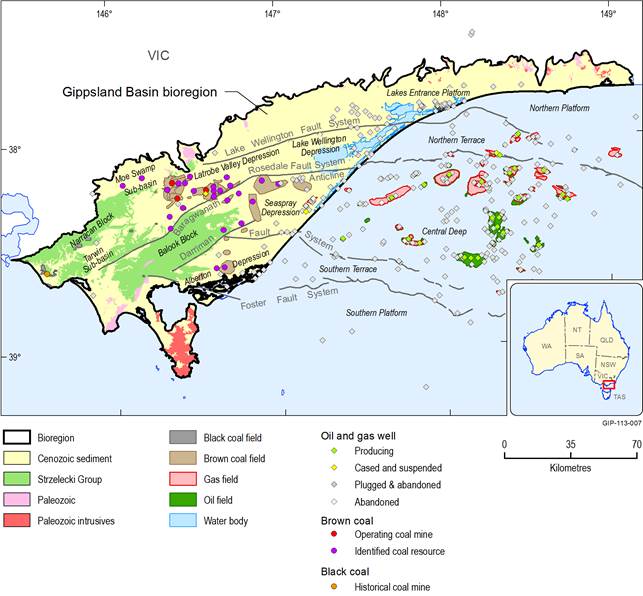 Figure 21 Distribution of coal fields and resources, oil and gas fields of the Gippsland Basin

An overview of coal resources is provided here. More detailed discussion of coal resources in the Gippsland Basin bioregion will be presented in companion product 1.2 of the Bioregional Assessment (Coal and coal seam gas resource assessment).

Black coal occurs within the Cretaceous Strzelecki Group of the Gippsland Basin. The coals are mainly high-volatile bituminous with 5 to 10% moisture, 30 to 35% volatile matter and 6 to 12% ash. Vitrinite reflectance is up to 0.9% Rv for buried strata, and 0.5 to 0.67% Rv for strata in outcrop (Holdgate, 2003). Some black coal production has occurred historically within the Gippsland Basin where local uplift and erosion stripped overburden. This has mainly been in the vicinity of the Narracan Block, where black coal was mined from Lower Cretaceous Strzelecki Group rocks, most notably at Wonthaggi. Mining of black coal occurred between 1864 and 1970 and production amounted to approximately 23 million tonnes (Mt) (Holdgate, 2003).

Whether any further future developments occur depends very much on satisfying greenhouse gas emission standards, because there are currently no limits to the economically winnable reserves, at least for many hundreds of years to come.

Note there are no coal fields in the Lakes Entrance Platform or the Lake Wellington Depression, however, thin coal seams are intercepted under deep cover in boreholes within these regions)

The Traralgon Formation contains the largest brown coal deposits in the Gippsland Basin (Holdgate et al., 2000). Two coal seams are named within the Traralgon Formation, the T1 and T2 seams. Seam thicknesses often exceed 100 m. Where the seams occur in stratigraphic superposition, they form a total thickness of over 150 m.

The Traralgon Formation coal seams subcrop generally beneath < 30.5 m overburden across the Baragwanath Anticline uplift area where, out of an indicated resource of 345 billion tonnes (Bt) across the basin, approximately 10 Bt are considered economically recoverable reserves (Holdgate et al., 2000). Elsewhere in the basin, the Traralgon coal seams are deeply buried, for example in the Seaspray Depression they are covered by 300 to 700 m thick Seaspray Group limestones. They are unlikely to be mined in the areas of thick cover, but may constitute a possible coal seam gas resource (Holdgate, 2003).

The Yallourn sequence comprises up to 110 m of coal in areas near the western end of the Latrobe Valley. The seam spatially overlies the Morwell 2 seam. The major Yallourn depocentre was on the downthrown east side of the Morwell Monocline (Holdgate et al., 2007). On the upthrown west side, the Yallourn sequence is truncated by Pliocene erosion. West of the Yallourn Monocline, the seam is eroded off the uplifted Haunted Hill Block. An age equivalent, the Moe Seam occurs in the Moe Swamp sub-basin, west of the Haunted Hills Block with a thickness of 40 m (Holdgate et al., 2007).

Although subsidence has not been detected along the coast of the Gippsland Basin (Department of Environment and Primary Industries, 2014; Sjerp and Charteris, 2008), predictive subsidence modelling suggests that subsidence may occur along the coast as a result of the lowering of hydraulic heads in the Latrobe Group Aquifer, caused by offshore oil and gas production, onshore groundwater extraction for irrigation and coal mine dewatering (Freij-Ayoub et al., 2007). Based on their projections of future groundwater level in the Latrobe Group Aquifer, Freij-Ayoub et al. (2007) predicted maximum coastal subsidence of between 480 and 1208 mm in the year 2056.

The Gippsland Basin is one of Australia’s major crude oil and natural gas provinces. More than 400 petroleum exploration wells have been drilled in the basin and approximately 90,000 line km of two-dimensional seismic data and more than forty three-dimensional seismic surveys have been acquired. Consequently, exploration within the basin is mature in comparison with other Australian basins, particularly in the Central Deep region of the basin. Outside this region however, the basin is relatively under-explored in comparison with other prolific hydrocarbon producing basins around the world (Geoscience Australia, 2014).

Most demonstrated oil and gas resources are in the offshore portion of the basin. Oil and gas are mainly produced from structural and structural/stratigraphic traps within the Oligocene, Eocene, Paleocene and Late Cretaceous marine, marginal marine and continental clastic sequences. Liquid hydrocarbon production peaked in 1985 and has gradually declined since then. Table 13 provides an overview of produced and remaining conventional oil and gas demonstrated resources in the Gippsland Basin. There is an expectation that further recoverable conventional gas resources will be discovered in the Gippsland Basin (Bradshaw et al., 2012; Pollastro et al., 2012).

The main period of hydrocarbon generation and expulsion is thought to have commenced in the Miocene as a result of increased sedimentary loading of the Cenozoic carbonate sequences. In the major depocentres of the basin, restricted areas underwent an earlier phase of generation and migration around the middle Eocene. At that time, no regional Lakes Entrance seal was in place and any traps would have involved older intra-Latrobe Group sealing units and earlier formed traps (Geoscience Australia, 2014).

Onshore, three sparsely explored hydrocarbon play fairways have been identified: the Early Neocomian part of the Strzelecki Group, the Golden Beach Subgroup, and the intra-Latrobe Group at target depths ranging from 800 to 4000 m (Chiupka, 1996). Table 14 is an overview of the Gippsland Basin petroleum system.

At present, the Victorian unconventional gas industry is at a very early stage. It is not yet known whether coal seam gas extraction is economically viable in the Gippsland Basin. A moratorium on hydraulic fracturing has been in place in Victoria since August 2012 (Ross and Darby, 2013). The moratorium has slowed commercial exploration for unconventional gas resources.

Harrison et al. (2012) divided the onshore Gippsland Basin into two distinct zones that have different prospectivity for unconventional gas resources: the ‘Western Block’ where the lower rift sequence of the Cretaceous Strzelecki Group is widely exposed due to multiple episodes of basin inversion along north-easterly trending faults linked to the basement, and the ‘Eastern Depression’ where the Strzelecki Group is more simply distributed across the basement, with structure still dominated by the original east-west extensional faults.

Harrison et al. (2012) noted that groundwater flowing off the highlands and Strzelecki Ranges toward the petroleum production areas could be continually bringing new nutrients into Traralgon Formation coal sequences and removing wastes to enable microbial production of methane. Temperature ranges in the Traralgon Formation are close to or overlapping with the survival threshold for micro-organisms, allowing a small possibility of microbial methane production (Harrison et al., 2012). Further discussion of coal seam gas development potential will be provided in companion product 1.2 of the Bioregional Assessment (Coal and coal seam gas resource assessment).

The Strzelecki Group experienced much higher temperatures in the past (during the middle Cretaceous, 100 to 90 Ma). The Strzelecki Group may be considered the source, reservoir and seal for tight gas. Fluvial source rocks are carbon rich with numerous flecks of coal and plant debris clearly visible in core and outcrop samples, likely being gas-prone kerogen sources, and the required thicknesses of around 500 m of sediments occur throughout the basin except at its margins. Additionally, the modern thermal regime includes regions of the Strzelecki Group that appear to be in the gas generating window (150 °C). However, the previous higher temperatures may have already stimulated gas production in the past (Harrison et al., 2012). Harrison et al. (2012) also commented that there may be regions of the Strzelecki Group where current temperatures are higher than paleo-temperatures and might be in the gas generating window.

Bradshaw et al. (2012) reported that the Gippsland Basin contains approximately 1853 PJ of tight gas for the Wombat, Gangell and Triforn/North Seaspray reported discoveries. These discoveries are onshore, within the Strzelecki Group in the Seaspray Depression.

The sedimentary units of the Gippsland Basin also host significant groundwater resources that are utilised for a variety of industries. Groundwater will be discussed further in Section 1.1.4.

Harrison et al. (2012) included information on geothermal prospectivity in the Gippsland Basin, particularly onshore. Harrison et al. (2012) noted that Cenozoic sediments in the onshore Gippsland Basin have lower thermal conductivity on average than comparable rocks around the world and that this leads to higher temperatures in the subsurface that may enable low temperature geothermal energy use (e.g. supplementary water heating at coal fired power stations potentially increasing coal use efficiency). Groundwater temperatures ranging from 30° C to 70° C have been recorded from depths between 500 and 1000 m in the Gippsland Basin. The hottest groundwater is in the Latrobe Valley and Lake Wellington depressions. Geothermal gradients in these areas range from less than 2° C/100m to over 10° C/100m (Leonard and King, 1992).

The principal reservoir target is the Latrobe Group and the potential storage areas are generally current and future depleted oil and gas fields, located in the northern and central parts of the offshore basin. This poses a reservoir use optimisation problem with future CO2 storage potential depending on oil and gas resource extraction scheduling. Areas of near-shore and southern parts of the basin have recently been made available for exploration for CO2 sequestration via the Offshore Greenhouse Gas Storage Acreage Release (Geoscience Australia, 2014).