Little information is available with which to characterise the surface water – groundwater interactions within the Cooper subregion. Flowing artesian springs are found at the margins of the Great Artesian Basin (GAB) including just outside the subregion boundary, and are associated with structural geological features. These spring waters have a hydrochemical character which indicates mixing of different GAB water sources, and potentially deeper water sources.

The watertable in the Cooper subregion may interact with parts of the Cooper Creek surface water system. There is the potential for the shallow groundwater system to discharge to surface drainage. Groundwater may also be an important source of water for lakes in the subregion, such as Lake Blanche.

Large flooding events which occur within the subregion are unlikely to contribute significantly to groundwater recharge due to high evaporation rates.

Flowing artesian springs occur adjacent to the Cooper subregion (Figure 33), within the discharge margins of the GAB, and are generally associated with structural features, such as faults, folds, monoclines and intersecting lineaments. Upward artesian groundwater flow along faults is the source of many springs, as well as the abutment of aquifers against impervious bedrock and pressure water breaking through thin confining beds near the discharge margins of the geological Eromanga Basin.

Kellett et al. (2012a) describe features that indicate that the shallow watertable may be interacting with surface water along significant reaches of the Cooper Creek. They propose that some reaches of these drainage systems may be receiving baseflow from shallow aquifer systems, that is, there is potential for the shallow groundwater system to discharge to surface drainage, which may occur within the Cooper subregion.

Watertable mapping presented in Section 1.1.4 coupled with vegetation mapping and remote sensing shows the potential for surface water – groundwater interaction along many reaches of streams in the Cooper subregion (Kellett et al., 2012a). This potential is likely to be diminished where streams open out onto broad alluvial plains or terminal wetlands, such as for broad braided sections of Cooper Creek, and the terminal reaches of Strzelecki Creek at Lake Blanche (Kellett et al., 2012a). The Atlas of Groundwater Dependent Ecosystems (GDE Atlas; Bureau of Meteorology, 2012) identifies few areas within the subregion that may have a potential for reliance upon the surface expression of groundwater (Figure 33). Ecosystems reliant on surface expressions of groundwater rely on groundwater to meet some or all of their water requirements and to be present at the ground surface. This includes some terrestrial vegetation, subsurface fauna communities, and some vegetation which is associated with a surface water body. The GDE Atlas does not show any ecosystems identified in previous studies (either desktop or field-based) as being reliant upon groundwater (Bureau of Meteorology, 2012). Lake Blanche hosts several GAB discharge springs, shown in Figure 33, which lie just outside the subregion, but are included here as they may be connected to the hydrogeological system. These springs are in the Lake Frome spring supergroup, which is part of the ‘community of native species dependent on natural discharge of groundwater from the Great Artesian Basin’, a community listed as ‘Endangered’ under the Commonwealth’s Environment Protection and Biodiversity Conservation Act 1999 (Fensham et al., 2010).

Groundwater discharge via salt lakes, such as Lake Blanche within the Cooper subregion, has been recognised, particularly in areas where aquifers interact with faults and are juxtaposed against geological units with lower porosity and permeability (Love et al., 2013). Polygonal faulting has been proposed as a potential pathway for fluid migration (Kellett et al., 2012b). In the north-east of SA, polygonal faulting is recorded at the surface and at depths of hundreds of metres, throughout the Cretaceous Eromanga Basin sequence (Watterson et al., 2000). 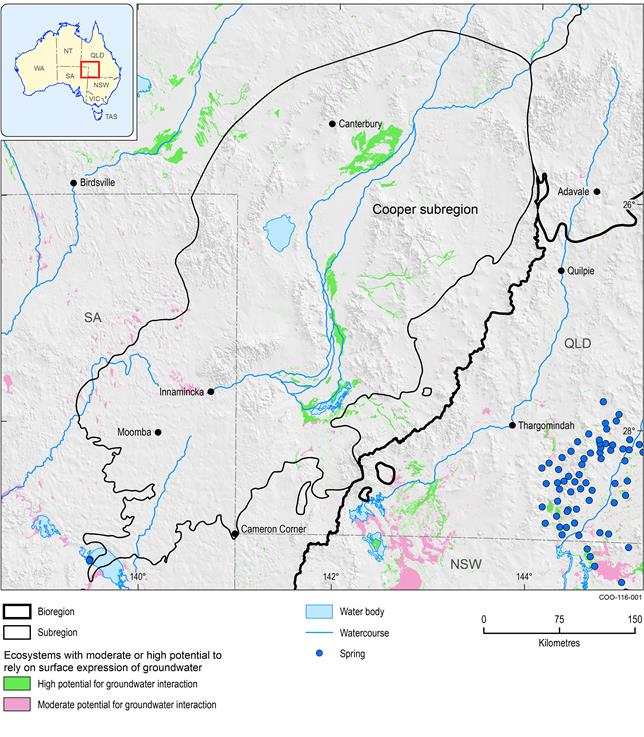