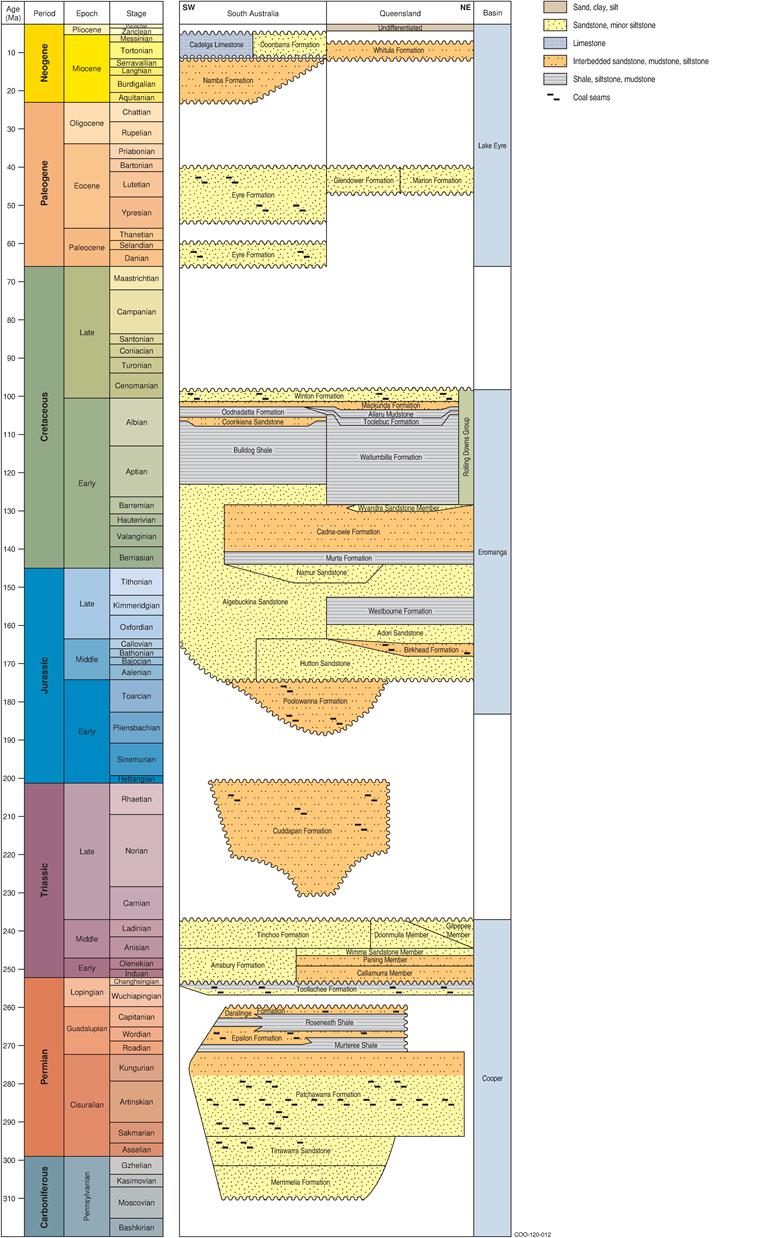 The Cooper Basin unconformably overlies the sedimentary and volcanic rocks of the Cambrian – Ordovician Warburton Basin. The Warburton Basin consists of a sequence of marine sedimentary rocks deposited in a range of environments from the continental shelf to the deeper ocean. These include carbonate rocks and shale, siltstone and chert (Fergusson and Henderson, 2013).

The Adavale Basin System as defined by Draper et al. (2004) refers to the Adavale Basin and remnants of Devonian sedimentary rocks in the region. Devonian rocks are intersected in the Warrabin and Barrolka troughs, beneath the north-east Cooper Basin and can be identified from seismic data (Draper et al., 2004; Fergusson and Henderson, 2013; Murray, 1994).

Numerous granite bodies intrude the Warburton Basin and underlie the Cooper Basin. Early Devonian granites occur beneath the southern part of the Cooper Basin in Queensland and SA. middle Carboniferous and early Permian granites are present beneath the Nappamerri Trough, and include the Big Lake Suite granodiorite (Gatehouse et al., 1995; Meixner et al., 2012).

The Cooper Basin is Australia’s largest producing onshore hydrocarbon basin. As such, the geology of the Cooper Basin has been studied in detail over a long period of time. The following summary is based on regional work carried out in SA (e.g. Alexander et al., 1998; Boucher, 2001; Gravestock and Jensen-Schmidt, 1998; Hill and Gravestock, 1995) and Queensland (e.g. Draper, 2002b; Fergusson and Henderson, 2013), as well as basin-wide studies (e.g. Meixner et al., 2012; Radke, 2009).

The Gidgealpa Group contains rocks which are entirely of non-marine origin. Initially formed in glacial environments, it is characterised by coal measures that are separated by lacustrine shales. The Gidgealpa Group is thickest in the south-western part of the Cooper Basin, where it reaches a maximum thickness of 1200 m (Geoscience Australia and Australian Stratigraphy Commission, 2012). On the Jackson-Naccowlah-Pepita (JNP) Trend, the Group is 200 to 400 m thick, whereas in areas immediately adjacent it is less than 100 m thick. In the northern and north-eastern Cooper Basin, intersected thickness is from 50 to 150 m (Gray and McKellar, 2002). The Gidgealpa Group incorporates rocks ranging in age from Late Carboniferous to the end of the early Permian. The group comprises rocks of the Merrimelia Formation, Tirrawarra Sandstone, Patchawarra Formation, Murteree Shale, Epsilon Formation, Roseneath Shale, the Daralingie Formation and the Toolachee Formation (Geoscience Australia and Australian Stratigraphy Commission, 2012).

The Merrimelia Formation includes sediments derived from the terminal stages of glaciation. This unit interfingers with the overlying Tirrawarra Sandstone, which includes conglomerate, sandstone, mudstone, siltstone and shale. The Tirrawarra Sandstone is a fine- to coarse-grained and pebbly sandstone, with minor carbon-rich silt beds, shale and coal (Alexander et al., 1998; Draper, 2002b; Radke, 2009).

The Patchawarra Formation is a widespread, upward-fining, interbedded sandstone, siltstone, mudstone and coal-bearing succession. At its thickest, three assemblages are distinguishable: 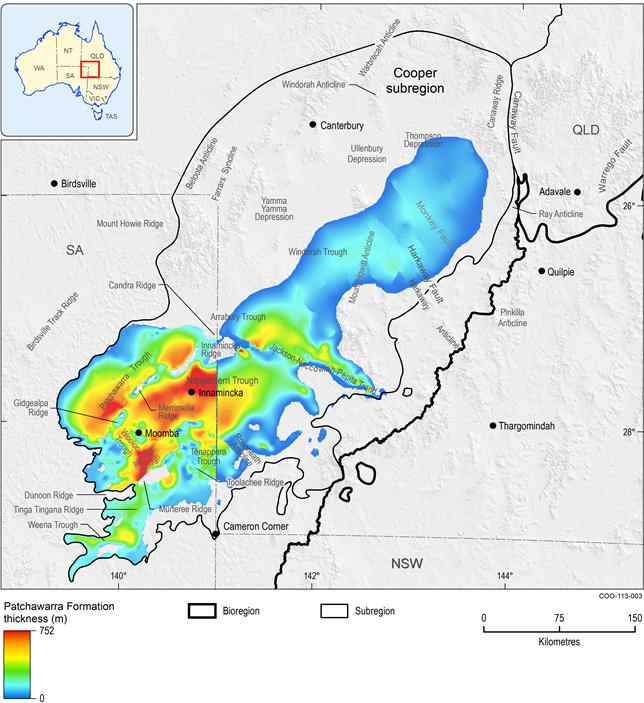 The Murteree Shale is a clay-rich siltstone with minor fine-grained sandstone, and some carbonaceous, muscovite and pyrite-rich sections. The unit becomes sandier towards the south of the Cooper Basin. The Murteree Shale averages 50 m thick, and is up to 80 m thick in the Nappamerri, Wooloo, Allunga and Tenappera troughs. The depositional environment is interpreted as deep lakes with minimal disturbance (Alexander et al., 1998). The Murteree Shale conformably overlies and interfingers with the Patchawarra Formation, and is in turn conformably overlain by the Epsilon Formation, although in places it is unconformably overlain by the Toolachee Formation (Alexander et al., 1998; Draper, 2002b).

The Roseneath Shale is restricted to the southern part of the Cooper Basin, and is found across the Nappamerri, Wooloo, Allunga and Tenappera troughs. The Roseneath Shale conformably overlies and interfingers with the Epsilon Formation, and is conformably overlain by and interfingers with the Daralingie Formation. The Roseneath Shale is a siltstone and mudstone, with minor fine-grained sandstone interbeds. This unit was deposited in a lacustrine setting. The unit is generally 50 to 80 m thick, and has a maximum thickness of 110 m in the Nappamerri and Tenappera troughs (Alexander et al., 1998; Draper, 2002b; Hill and Gravestock, 1995).

The Daralingie Formation consists of sandstone, shale and coal conformably overlying the Roseneath Shale. It is disconformably overlain by the Toolachee Formation. The Daralingie Formation is dominated by carbonaceous and micaceous siltstone and mudstone with interbedded, fine- to very fine-grained sandstone. These rocks form upward-coarsening cycles. The unit is restricted to the southern part of the Cooper Basin, averaging 15 to 30 m thick, with a maximum thickness of 120 m in the Nappamerri and Allunga troughs. The Daralingie Formation was deposited in prograding deltas and beaches developed as the lake in which the Roseneath Shale was deposited receded (Alexander et al., 1998; Draper, 2002b).

In SA, the Toolachee Formation is thickest in the Nappamerri and Patchawarra troughs, with a maximum thickness of at least 200 m (Gray and McKellar, 2002; Meixner et al., 2012). In Queensland it reaches up to 120 m in the Windorah Trough (based on well intersections; Real Energy Corporation Limited (2014)). The Toolachee Formation is generally 25 to 50 m thick, and thickens from north to south and south-west, approaching 130 m thick immediately north of the JNP Trend, and 150 m thick to the south (Alexander et al., 1998; Gray and McKellar, 2002). Coal in the Toolachee Formation is thickest in the Patchawarra and Arrabury troughs, where it reaches a cumulative thickness of up to 40 m. It also occurs in the Nappamerri and Tenappera troughs. Coal reaches cumulative thicknesses of up to 13 m in the Ullenbury Depression, and is also in the Windorah Trough and the Yamma Yamma Depression. It is thought that coals were deposited in raised swamps, with restricted overbank flooding (Gray and McKellar, 2002). The thickness and distribution of the Toolachee Formation in the Cooper subregion is shown in Figure 17.

Three members have been described from within the Arrabury Formation, the Callamurra, Paning and Wimma Sandstone members. The Callamurra and Paning members are mudstone and siltstone with interbedded fine- to medium-grained sandstone, whereas the Wimma Sandstone Member consists of sandstone with minor siltstone interbeds. These units may be indistinguishable in places, although a depositional hiatus of up to 10 million years has been postulated between the Callamurra and Paning members (Alexander et al., 1998). The Arrabury Formation has a maximum thickness of 412 m in the Arrabury Trough, and is also thickest in the Nappamerri and Windorah troughs. The remainder of the Arrabury Formation is between 50 and 100 m thick (Gray and McKellar, 2002).

Deposition of the Arrabury Formation is interpreted as being in vegetated floodplains with ephemeral lakes in lowlands, with pedogenesis in exposed areas. The floodplain was cut by low sinuosity rivers confined to north-east-oriented channel belts in the Patchawarra and Nappamerri troughs (Alexander et al., 1998). 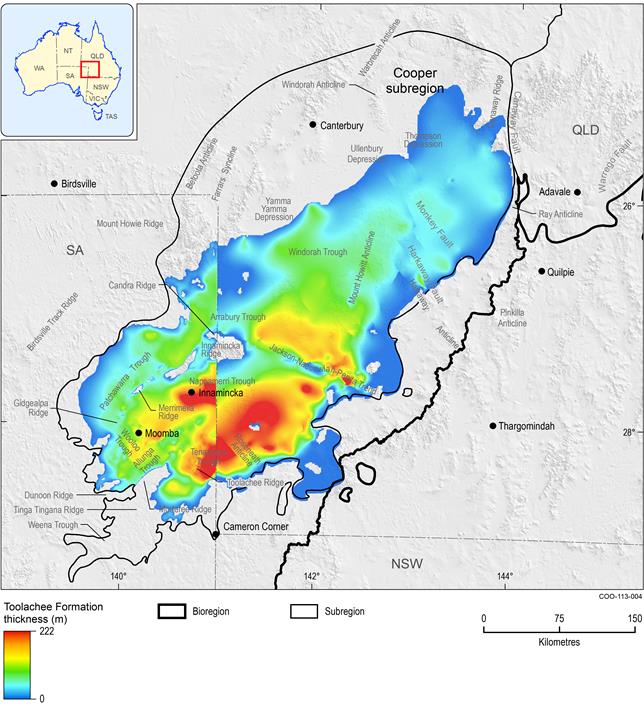 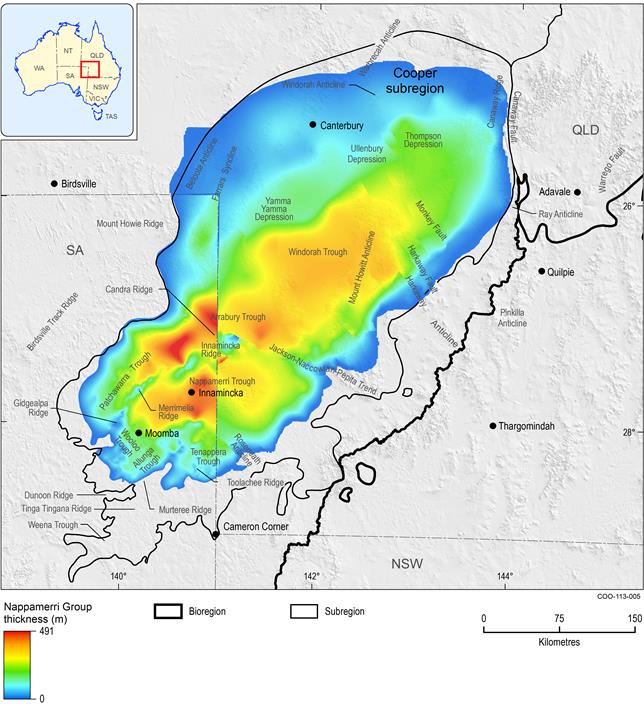 The youngest unit in the Cooper Basin (and the top of the Nappamerri Group) is the Tinchoo Formation. The Tinchoo Formation is a fining-upwards fine- to medium-grained sandstone with thin siltstone interbeds which conformably overlies the Arrabury Formation. In Queensland, it is subdivided into the Gilpepee and Doonmulla members, but these members are not readily identifiable to the south-west in SA where the formation has been eroded and is relatively thin (Alexander et al., 1998; Gray and McKellar, 2002). The Tinchoo Formation unconformably overlies the Warburton Basin to the north-west of the Cooper Basin towards the Birdsville Track Ridge. The Tinchoo Formation is unconformably overlain by the Cuddapan Formation or units of the Eromanga Basin. A maximum thickness of 109 m is preserved in SA where the formation has been eroded from crests of major ridges and towards the edge of the Cooper Basin. In Queensland the formation is mainly 125 to 200 m thick and thickest (to 263 m) adjacent to the Windorah Trough (Alexander et al., 1998; Golder Associates, 2011; Gray and McKellar, 2002).

The Tinchoo Formation is interpreted to have been deposited in a fluvial environment, which graded into a fluvial and lacustrine setting towards the end of deposition (Alexander et al., 1998; Gray and McKellar, 2002). 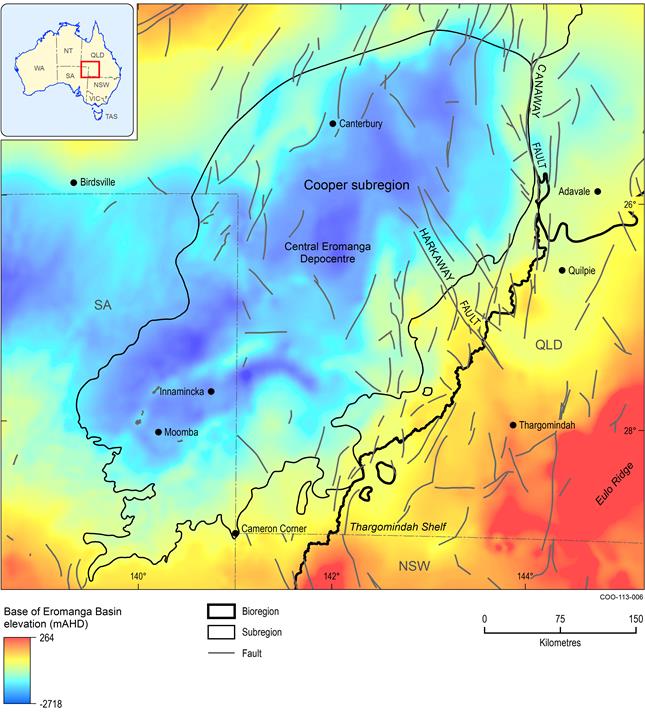 Table 5 Stratigraphy of the Eromanga Basin in the Cooper subregion

The geological Lake Eyre Basin is a thick sedimentary succession overlying the Eromanga Basin, covering parts of northern and eastern SA, south-eastern NT, western Queensland and north-western NSW. The basin is up to 400 m thick and contains sediments deposited from the Paleocene (66 Ma) through to the Quaternary (Stewart et al., 2013). The Lake Eyre Basin is further subdivided into three sub-basins, with the Callabonna sub-basin encompassing part of the Cooper subregion (Callen et al., 1995). Three phases of deposition are recognised within the basin, the first from the late Paleocene to the middle Eocene, represented by the Eyre, Glendower and Marion formations; the second from the end of the Oligocene to the Miocene, represented by the Namba, Whitula and Doonbara formations and the Cadalga Limestone; the third phase occurred during the latest Pliocene to the Quaternary (Alley, 1998; Callen et al., 1995).

The Marion Formation consists of sandstone and conglomerate, and has been extensively silicified such that it is capped by silcrete. It unconformably overlies the Winton Formation, and is overlain by Austral Downs Limestone and undifferentiated Quaternary sediments. The Marion Formation is up to 8 m thick in the Cooper subregion, and is correlated with the Glendower and Eyre formations. It is recorded as scattered occurrences in the northern and north-western part of the subregion in Queensland (Draper, 2002a).

The Whitula Formation is confined to the Windorah Trough, Yamma Yamma Depression, Farrars Syncline and Thomson Depression in the Queensland portion of the Cooper subregion (see Figure 14 for locations). It is an interbedded sandstone, siltstone, mudstone and claystone with minor conglomerate, lignite and gypsum. The unit contains some silica or iron oxide indurated portions. It unconformably overlies the Glendower Formation or weathered Winton Formation and is conformably overlain by undifferentiated Quaternary alluvium. The maximum recorded thickness is 160 m. The Whitula Formation was deposited in a fluvial and lacustrine environment (Draper, 2002a).