The Cooper subregion is defined by the extent of the geological Cooper Basin and covers approximately 130,000 km2 of south-western Queensland, north-eastern SA and a small area of NSW (Stewart et al., 2013, Figure 4). The basin is a north-east-trending, subsurface basin of non-marine clastic sedimentary rocks and coal, ranging from fluvial, lacustrine, and deltaic, with glacial sediments at base which formed during the Late Carboniferous through to the Triassic (305 to 230 Ma). It lies unconformably over early Paleozoic sedimentary rocks of the Warburton Basin to the south-west and the Devonian Warrabin Trough in the north-east (Radke, 2009). The Cooper Basin sedimentary rocks do not crop out, although the subsurface expression of the basin extends approximately 560 to 570 km north-east to south-west and is approximately 160 to 220 km wide.

The surface geology of the Cooper subregion is shown in Figure 13 . Most of the subregion is covered by undifferentiated Quaternary and Cenozoic sediments, with outcrop of some Cretaceous rock, predominantly Winton Formation, in the central and eastern parts of the subregion.

The major structural features of the Cooper Basin are shown in Figure 14. The basin is divided into northern and southern areas, separated by the Jackson-Naccowlah-Pepita (JNP) ridge, which show different structural and sedimentary histories (Fergusson and Henderson, 2013; Heath, 1989). Three major troughs in the south-west, the Patchawarra, Nappamerri and Tenappera, are separated by the Gidgealpa-Merrimelia-Innamincka (GMI) and Murteree Ridges, which align with the main depositional axis of the basin (Fergusson and Henderson, 2013; Gravestock and Jensen-Schmidt, 1998). Other structural features in the Cooper Basin include the Windorah and Arrabury troughs, and Yamma Yamma, Ullenbury and Thompson depressions; the Roseneath, Mount Howitt, Harkaway and Windorah anticlines and Jackson-Naccowlah-Pepita (JNP) Trend ; and the Weena and Allunga troughs. This complex structural fabric appears to have been inherited from basement features (Radke, 2009), and was reactivated and superimposed on the Cooper sequence post-deposition during and after the Late Cretaceous. The Cooper Basin is bounded on the west by the Birdsville Track Ridge and Betoota Anticline, which separates the Cooper and Pedirka basins (Hibburt and Gravestock, 1995), and in the east by the Canaway Ridge, Ray Anticline and Pinkila Anticline which separate the Cooper and Galilee basins (Hoffmann, 1989). The Cooper Basin adjoins the Galilee Basin in the north-east. The Canaway Ridge marks the north-eastern limit of the Cooper Basin and represents a structural divide, separating deposition further east in the southern Galilee and Bowen basins (Radke, 2009). 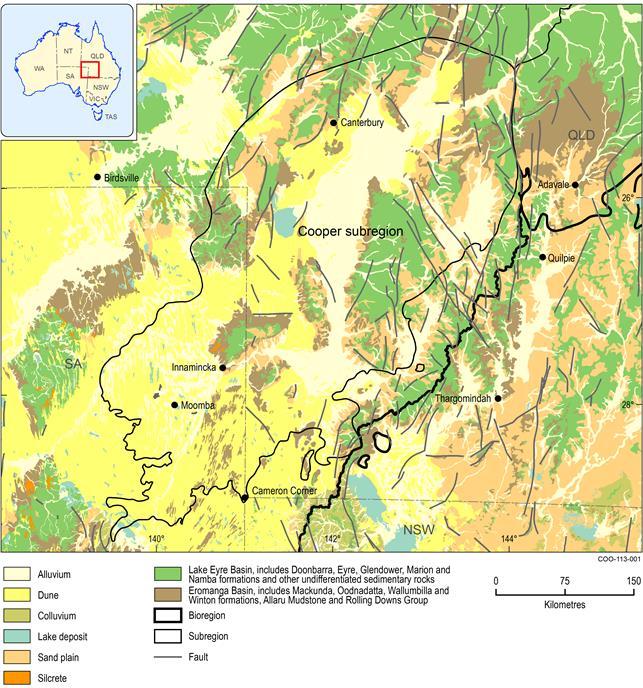 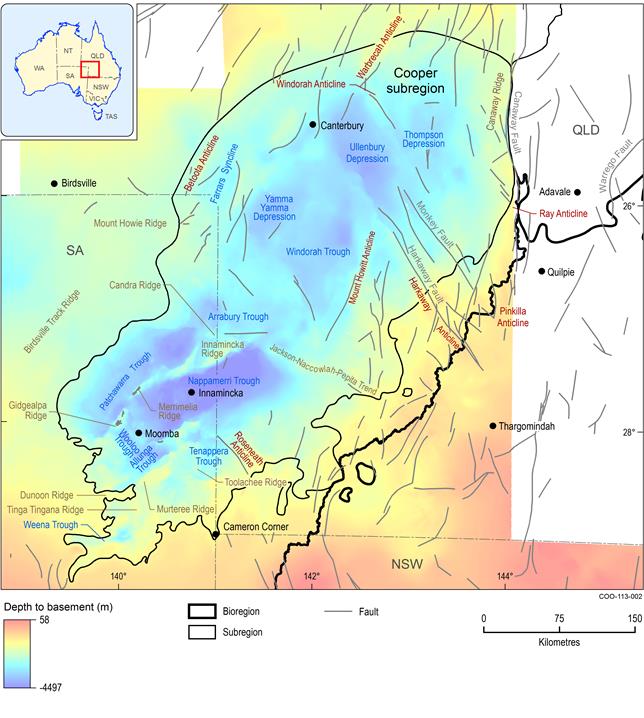