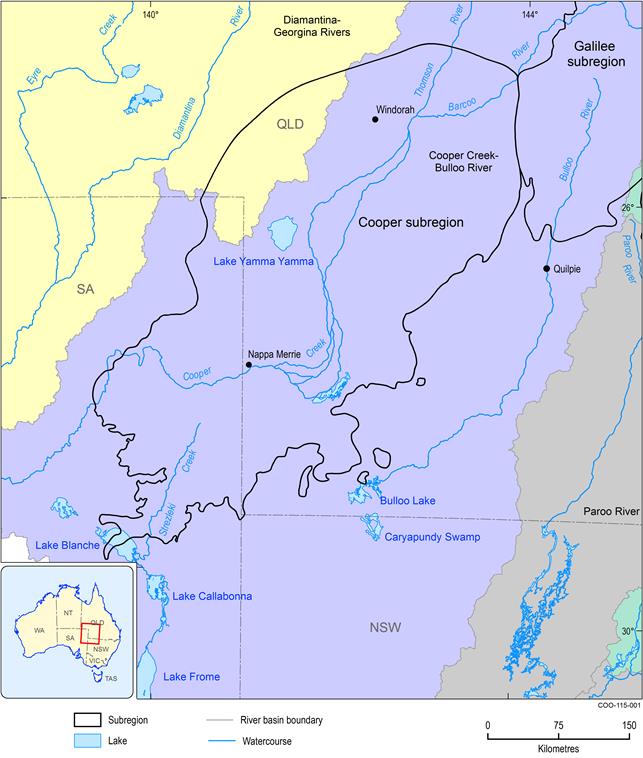 Figure 28 The Cooper subregion and associated nearby river basins

The stream below the junction of the Thomson and Barcoo rivers is known as Cooper Creek and is characterised by complex anastomosing channels and numerous wetlands and waterholes. Headwater streams originate from the Great Dividing Range of Queensland and feed Cooper Creek through the Thomson and Barcoo rivers. Cooper Creek flows towards the south-west to its final terminus in Lake Eyre after passing more than 1500 km of different geographical features. The area of the Cooper creek floodplain is approximately 15,300 km2 and the width can exceed 60 km at many locations near Currareva. In the dry season, the channels are restricted to numerous lagoons and claypans but during high flow the actual main channel becomes hard to define. When a flood event occurs, the area becomes a huge inland sea broken only by a few ridges and numerous stunted trees (Knighton and Nanson, 2001). Records of large floods in the area extend back as far as the late 19th century, with the most significant episodes of flooding occurring in 1893, 1906, 1949, 1955, 1963, 1974, 1990 and 2000 (Bureau of Meteorology, 2010).

Flow in Cooper Creek has not yet been affected by diversion of water for irrigated agriculture or major dams or weirs (McMahon et al., 2005). In a recent water resource plan for the Cooper Creek, the Queensland Government reserved 2000 ML of unallocated water (200 ML for general reserve, 1300 ML for strategic reserve and 500 ML for the town and community reserve) to meet future demand (DERM, 2011a). There is no major public water storage within the basin. 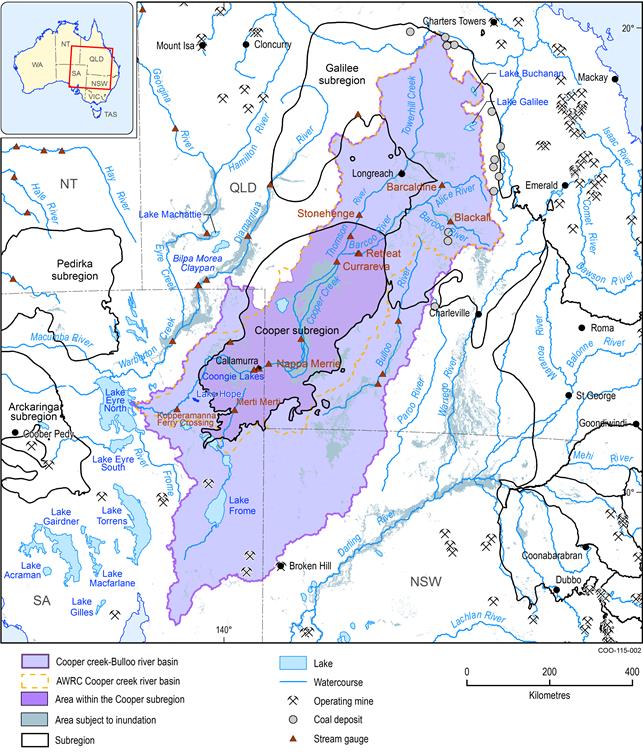 The Diamantina–Georgina river basin is located in the central part of Australia and is one of the largest river basins of the Lake Eyre Basin. It has a combined drainage area of 699,162 km2, which is about half of the Lake Eyre Basin including areas of Queensland and SA (McMahon et al., 2005). The major surface water resources in the basin are Mayne, Diamantina, Georgina, Hay and Alberga rivers and Farrars and Walker creeks as well as numerous wetlands and lakes. Other minor stream channels include Western River and Mill Creek as well as a series of small unnamed tributaries and swamps. A notable feature of the system is the extensive floodplain that dominates the catchment above Birdsville. About 11,932 km2 (9%) of the Cooper subregion is part of the Diamantina–Georgina river basin and this comprises 2% of the total basin area.

The Diamantina River originates in the north-west of Longreach and flows in a south-westerly direction through central Queensland and the Channel Country to form the Warburton River at its confluence with the Georgina River. The entire river length is about 1000 km to its terminus at Lake Eyre. The Western and Mayne rivers join the Diamantina River above Diamantina Lakes and Farrars Creek joins below Monkira (Figure 30). The rivers are characterised by complex anastomosing channels, wide floodplains and numerous waterholes and wetlands. Overall, the Diamantina–Georgina river basin is very flat and the rivers have greatly varying widths of active channels and floodplains. During large flood events, floodwaters can inundate thousands of square kilometres due to the low relief throughout the area. Floods normally develop in the headwaters of the Diamantina River and its major tributaries, however, flooding may result from heavy rainfall falling in the middle-to-lower reaches around Diamantina Lakes. Since 1965, large floods have occurred in 1974, 1991, 2004 and 2010 (Bureau of Meteorology, 2010).

The Georgina and Diamantina Water Resource Plan 2004 provides for 1000 ML as general reserve in the Lower Diamantina management area, which overlies a small part of the Cooper Basin. Additionally, 1500 ML is available across the whole catchment area for projects of state significance. The Plan also provides for limitation of in-stream storages. Currently, there are no large storages on the Diamantina River and it retains a near-natural flow regime. 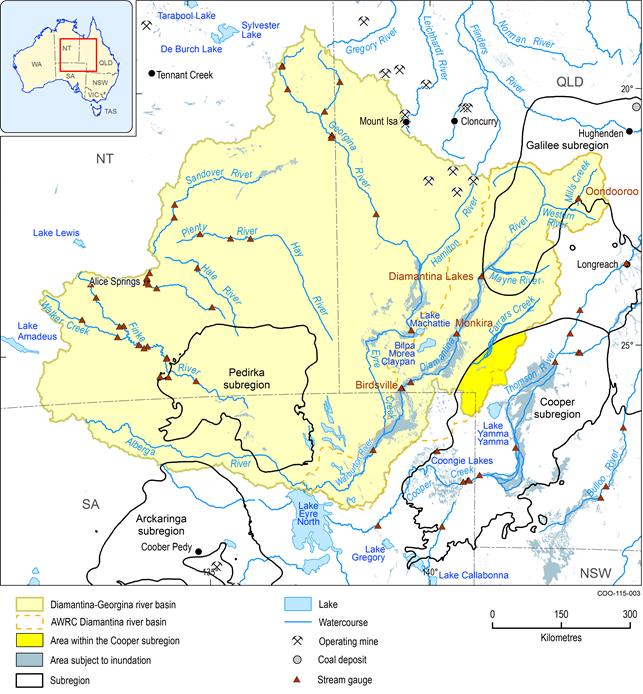