The main aquifers are the upper part of the Cadna-owie Formation, the Algebuckina Sandstone, Adori Sandstone and Hutton Sandstone, within the Jurassic to Early Cretaceous system.

Leaky aquitards include the Wallumbilla Formation, the Westbourne Formation and the lower part of the Cadna-owie Formation.

Tight aquitards are the Allaru Mudstone and Toolebuc Formation of the Rolling Downs Group, as well as the basal siltstone of the Murta Formation where it is present. 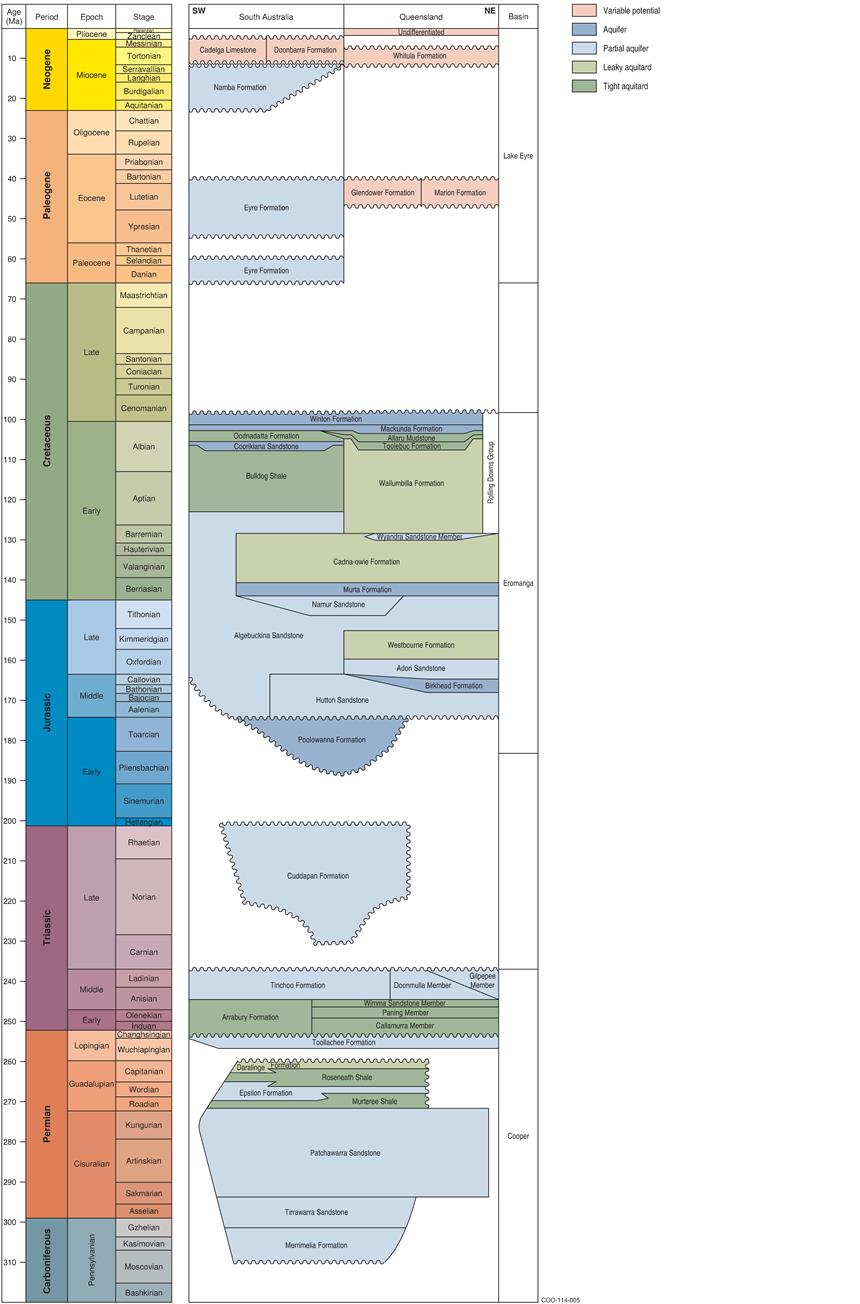 On a regional scale, groundwater in the Eromanga Basin flows from recharge areas along the Great Dividing Range west toward the discharge zones of the Western Eromanga Basin. Discharge areas include mound springs to the west of Lake Eyre and an arcuate band containing lakes Frome, Callabonna, Blanche and Gregory (Kellett et al., 2012).

The watertable throughout the Cooper subregion lies in the Early to Late Cretaceous Winton Formation, and less commonly, in the underlying Early Cretaceous Mackunda Formation. The Winton and Mackunda formations form a hydraulically continuous unit, and thus water levels in the Mackunda Formation can also be regarded as equivalent to the regional watertable. The watertable also lies in Cenozoic sediments overlying the Eromanga Basin sequence, such as the Eyre Formation. The water levels in Quaternary floodplain sediments generally form a continuum with the pressure surface and the underlying rock aquifer, however following periods of high river stage temporary head differences of up to 10 to 15 m have been observed in perched alluvial systems (Kellett et al., 2012). A density (salinity) corrected watertable map is provided in Figure 24.

Watertable mapping shows a watertable mound which coincides with the Innamincka Dome. This geological feature is a broad anticline in the vicinity of Innamincka, and exposes Winton Formation material along its axis. The mound is likely to be a local recharge mound, whereby extension fractures formed as a result of unloading and folding provide enhanced infiltration capacity, where they have remained open (Kellett et al., 2012). Groundwater flow bifurcates around this mound, but the regional flow direction to the south-west is generally maintained across the subregion. 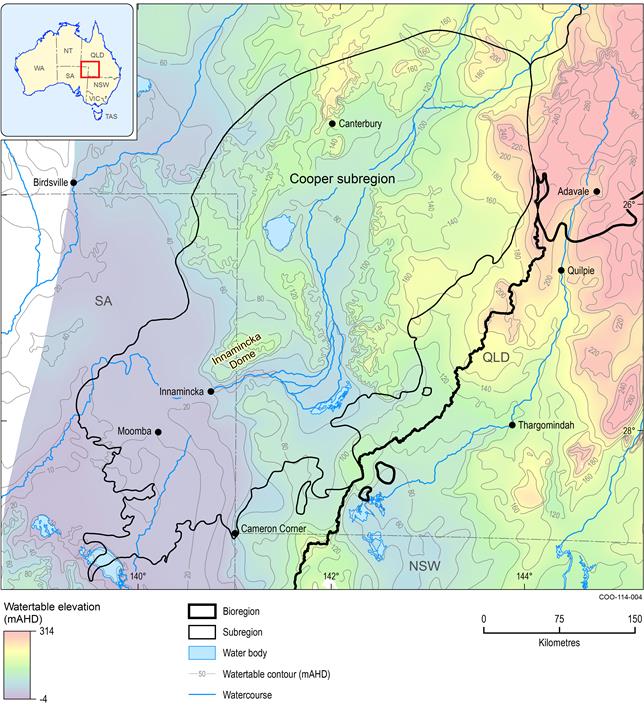 Groundwater flows diminish into areas in the centre of the subregion where the Eromanga Basin aquifers are deeply buried. Within the Central Eromanga Depocentre, flow is hard to quantify, as there are few bores and hydrochemical tracer methods are complicated. Flow rates are inferred to be lower than 0.3 m/year (Cresswell et al., 2012). 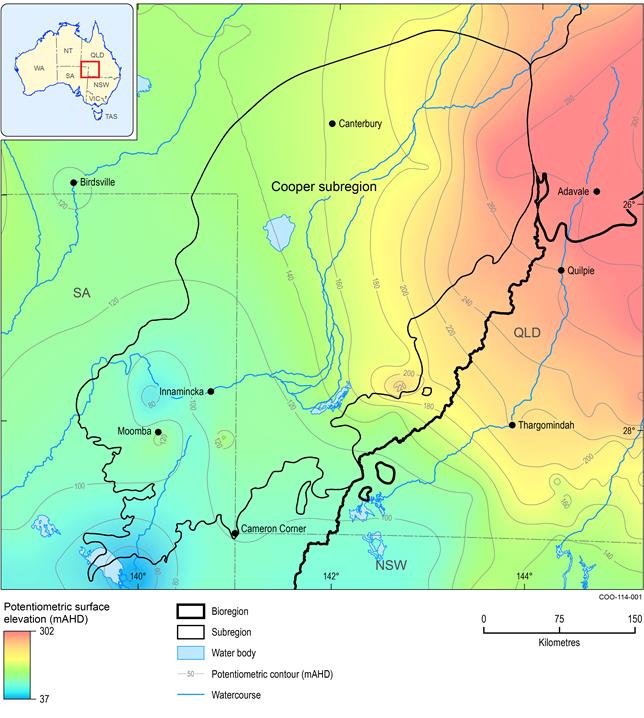 Vertical leakage or cross-formational flow takes place in the Cooper subregion from the lower, higher pressure aquifers in the Nappamerri Group and deeper Jurassic aquifers through the overlying leaky aquitards and aquifers of the Birkhead Formation, Adori Sandstone and Westbourne Formation and subsequent overlying aquifers in the Algebuckina Sandstone and the Cadna-owie Formation, and through the leaky aquitards of the Rolling Downs Group and Bulldog Shale into the Cretaceous aquifers of the Mackunda Formation and Winton Formation, or the regional watertable (Kellett et al., 2012; Keppel et al., 2013; Love et al., 2013; Toupin et al., 1997). Measured pressure differences between aquifers are an indication of the vertical leakage or flow, which is supported by hydrochemical indicators (Cresswell et al., 2012; Dubsky and McPhail, 2001; Love et al., 2013; Toupin et al., 1997).

The only source of potential rainfall recharge to the Eromanga Basin is via the Innamincka Dome. No other Eromanga Basin units crop out in the Cooper subregion. Some limited recharge via diffuse infiltration of sporadic rain water, flood waters or streamflow through Quaternary and Cenozoic cover sequences may occur, although this is likely to be effectively zero, as a result of extremely low rainfall and high evaporation (Cresswell et al., 2012; Love et al., 2013). The most significant source of groundwater to the Eromanga Basin sequence in the Cooper subregion is inflow from areas outside the subregion.

Recharge to the Cooper Basin can only occur through vertical leakage from underlying or overlying aquifers or cross-formation flow.

Natural leakage or natural discharge to surface takes place at springs and areas of seepage, as well as in lakes, which are abundant around the margins of the Central Eromanga Basin (Love et al., 2013; Radke et al., 2000). Discharge springs in the subregion are discussed in Section 1.1.6. 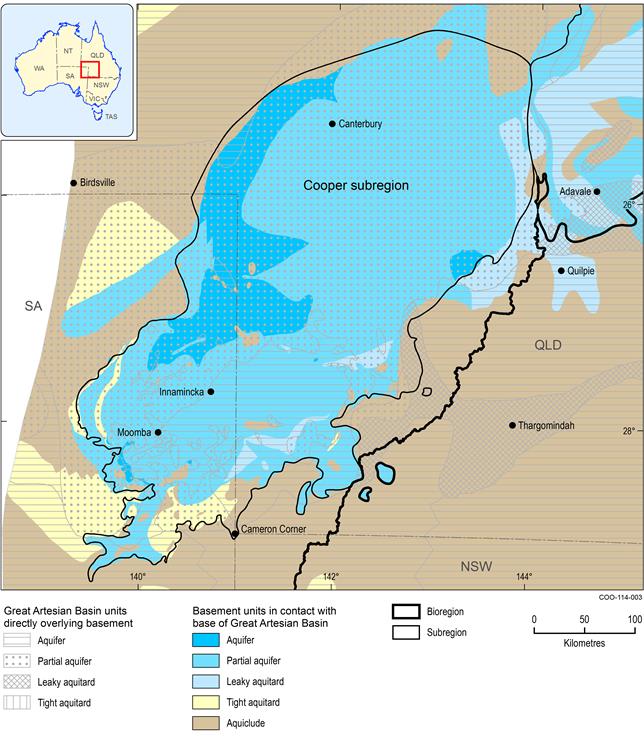