The Cooper subregion is sparsely populated. Very little census data is available for the area of the subregion as it contains no ‘Significant Urban Centres’ and the entirety of the subregion is reported within the ‘Balance of State’ for census data. The mesh block is the smallest geographic area on which the Australia Bureau of Statistics (ABS) reports data and only usual residential population and number of dwellings are reported at this scale. A total of 37 mesh blocks lie within or partly within the Cooper subregion boundary. In 2011 the total population of these mesh blocks was 1032, and 626 dwellings were recorded (Australian Bureau of Statistics, 2013).

The local government areas (LGAs) of the Cooper subregion are: Barcoo Shire, Quilpie Shire, and Bulloo Shire, with small amounts of Diamantina Shire and Longreach Regional in Queensland, and part of the Outback Areas Community Development Trust in SA (Figure 8). The Unincorporated Far West LGA in NSW covers such a small amount of area in the Cooper subregion it has not been included in the employment statistics below.

Industry of occupation is shown in Table 4 . As demonstrated by the township of Moomba with no permanent population but a large fly-in fly-out workforce, mining is the largest employer for the LGAs of the subregion at 30.1%, followed by manufacturing (15.2%), agriculture, forestry and fishing (9.5%) and construction (7.5%) (Australian Bureau of Statistics, 2013).

bThe LGA of Unincorporated SA covers a large area and only a small amount (which includes Innamincka and Moomba) of it lies within the Cooper subregion. This, combined with a large transient workforce, is the reason the employment numbers are so large compared to the population.

Most of the land in the subregion is used for natural vegetation grazing but there are also significant areas of nature conservation (see lists below of protected areas and wetlands) (Figure 9). The subregion also contains an area of mining and intensive gas treatment, storage and distribution at Moomba, a gas exploration and processing town with no permanent population.

Areas within the Cooper subregion that are listed in the Collaborative Australian Protected Area Database (Wang, Dataset 10):

Wetlands within the Cooper subregion that are listed in DIWA (Department of the Environment, Dataset 6):

Several threatened ecological communities of native species dependent on the natural discharge of groundwater from the Great Artesian Basin from the Lake Frome Supergroup are just outside the Cooper subregion on the edge of Lake Blanche and further south near Lake Callabonna. These communities are listed as endangered under the Commonwealth’s Environmental Protection and Biodiversity Conservation Act 1999. 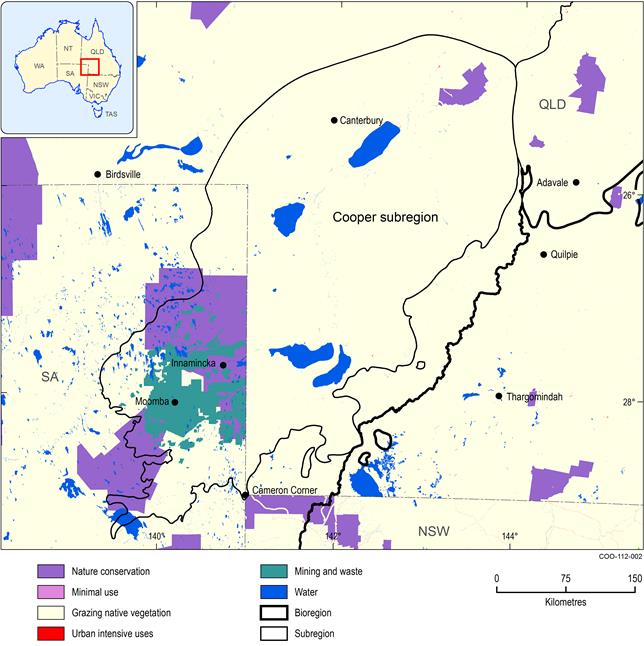 There are native title claims covering large portions of the subregion and a number of Indigenous Land Use Agreements (ILUAs) in place. ILUAs are negotiated agreements between native title claimants and others about the use and management of lands and waters and were introduced by amendments in 1998 to the Commonwealth’s Native Title Act 1993. An ILUA can be negotiated and registered separately to a native title determination.

At the time of writing there were 14 ILUAs in the Cooper subregion (Commonwealth of Australia, 2014):