This bioregional assessment helps us understand how coal seam gas and coal mining development could affect water resources and water-dependent assets in the Namoi subregion, which is part of the Northern Inland Catchments bioregion. It identifies where potential impacts could occur, as well as the areas that are unlikely to be affected.

The main surface water resource of the Namoi subregion is the Namoi River. There are three large dams that supply water to the subregion, of which Keepit Dam is the main water storage.  More than half of the water released from Keepit Dam and river inflow may be extracted for use for agriculture, towns and households. Of this, the great majority is used for agricultural irrigation. The landscape has been considerably altered since European settlement for agriculture. Significant volumes of groundwater are also used for agriculture (cropping).

Across the subregion there are a number of water-dependent ecological communities, and plant and animal species that are listed as threatened under either Commonwealth or New South Wales legislation. The subregion also contains Lake Goran, a wetland of national importance, and sites of international importance for bird conservation.

The subregion is underlain by rocks of different ages that belong to the Gunnedah and Surat geological basins, both major coal-bearing basins in eastern Australia. Current coal and coal seam gas development and exploration which might potentially impact on water and water-dependent assets are mainly located in the central and eastern parts of the subregion. There are six coal mines currently operating in the subregion. The Watermark Coal Project was conditionally approved in July 2015, but further steps are required before mining can start.

About the bioregional assessment 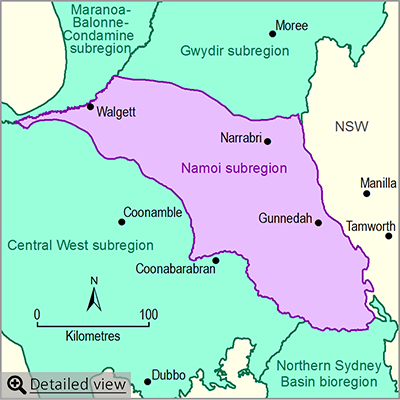