This bioregional assessment helps us understand how coal seam gas and coal mining development could affect water resources and water-dependent assets in the Hunter subregion. It identifies where potential impacts could occur, as well as the areas that are unlikely to be affected.

We assessed how 22 potential new coal mines or expansions of existing coal mines could affect groundwater and surface water resources in the Hunter subregion.

Regional-scale hydrological modelling indicates that an area of 2441 square kilometres could experience groundwater drawdown due to potential new mines or mine expansions. About three-quarters of this area overlaps modelled drawdown due to existing coal mines. Large changes in flow regime are possible in Wyong River, Loders Creek, Saddlers Creek, Wollar Creek and a number of ephemeral creeks. More detailed local information is needed to determine the level of risk. For example, using local information from the Wallarah 2 environmental impact statement greatly reduces modelled changes in the flow regime of the Wyong River. Lack of information meant some mines were not included in the hydrological modelling.

About 1228 kilometres of streams and 102 square kilometres of groundwater-dependent ecosystems – mainly rainforests, forested wetlands, and wet and dry sclerophyll forests – are potentially affected by changes in groundwater or surface water. Further analysis is needed to determine the level of risk to these ecosystems. Modelled changes in hydrology could affect the management of the Hunter Regulated River or the reliability of water supply in some unregulated streams, but more detailed local information is required to determine the level of risk.

The Hunter subregion is part of the Northern Sydney Basin bioregion. Major population centres include Newcastle and Gosford-Wyong along the coast, with smaller urban areas inland, including Maitland, Cessnock, Singleton and Muswellbrook. It includes a large part of the Hunter river basin and all of the Macquarie-Tuggerah lakes basin in NSW. The subregion is known for its coal mining, power generation, equine and viticulture industries. It includes two Ramsar‑listed wetlands and contains part of the Greater Blue Mountains World Heritage Area. 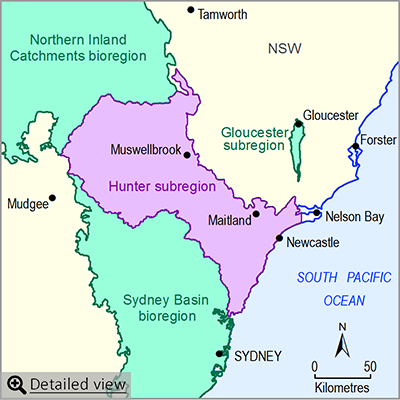