The Cooper GBA region spans an area of about 130,000 square kilometres and is located entirely within the Lake Eyre drainage catchment. About three quarters of the region lies in south-west Queensland with the remainder in north-east South Australia and a very small proportion in New South Wales.

Much of the Cooper GBA region is part of the Cooper Creek–Bulloo catchment. Cooper Creek and the Thomson, Barcoo and Bulloo rivers are the major streams in this basin. Cooper Creek flows some 1,500 kilometres south-west through Coongie Lakes Ramsar wetland to Kati Thanda—Lake Eyre. During periods of high flow its floodplain can exceed 15,300 square kilometres with a width exceeding 60 kilometres.

On 29 November 2017, the Cooper GBA region was announced as the first region selected for assessment under the Geological and Bioregional Assessment Program. The Cooper GBA region incorporates the Cooper–Eromanga Basin hydrocarbon system. It is Australia’s premier onshore oil and gas producing area and, as such, its geology is relatively well understood. The Cooper Basin is being actively explored for shale and tight gas, along with gas from deep dry coals.

Visit the rapid regional prioritisation webpage to see how the Cooper GBA region was chosen through stage 1 of the Geological and Bioregional Assessment Program.

The Geological and environmental baseline assessment for the Cooper GBA region synthesises knowledge about the geology and prospectivity of shale, tight and deep coal gas resources, water resources, protected matters and risks to water and the environment.

The impact assessment for the Cooper GBA region analyses the potential impacts to water resources and Commonwealth and state matters of environmental significance to enable effective monitoring, mitigation and management measures.

The final meeting of the Cooper GBA region user panel was held on 22 April 2021.

Discussions from each user panel meeting are summarised in a communique and available through the Stakeholder Engagement webpage. 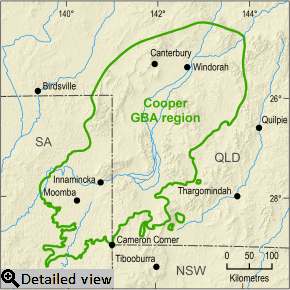