The Beetaloo GBA region (Beetaloo Sub-basin) is part of the greater McArthur Basin and covers an area of about 28,000 square kilometres in the Northern Territory. Located about 500 kilometres south of Darwin; the region is sparsely populated, with Daly Waters and Elliott the most populated settlements in the region.

The Geological and Bioregional Assessment Program uses the geological boundary of the Beetaloo Sub-basin, as defined by the Northern Territory Geological Survey, to delineate the region. To allow the Program to investigate the potential impacts of unconventional gas resource development on water and the environment immediately beyond the region, an additional extended boundary was defined, the Beetaloo GBA extended region.

The Beetaloo GBA region overlies the extensive Cambrian Limestone Aquifer, the principal water resource in the region. The Roper and Wiso surface water catchments cover most of the region and while there are no permanent streams, groundwater discharge supports perennial flows in the Roper River and some streams in the Elsey National Park. Important wetlands located in the Beetaloo GBA extended region include the Mataranka Thermal Pools, Limmen Bight (Port Roper) Tidal Wetlands in the Roper Basin (system), and Lake Woods in the Wiso catchment.

The Beetaloo GBA region is one of the most prospective areas for shale gas and liquids in Australia. The Northern Territory Government estimates that there are over 200,000 petajoules of gas in place in the sub-basin (NT Geological Survey Record 2017-003), however not all of this gas will be recoverable.

The region is a ‘frontier’ for unconventional gas. However, the demonstrated existence of substantial prospective and contingent shale gas resources, coupled with proximity to infrastructure, including the Northern Gas Pipeline, make the Beetaloo GBA region an excellent candidate to supply new gas to the East Coast Gas Market in the next five to ten years.

Visit the rapid regional prioritisation webpage to see how the Beetaloo GBA region was chosen through stage 1 of the Geological and Bioregional Assessment Program.

The impact assessment for the Beetaloo GBA region examines the potential impacts to water resources and Commonwealth and territory matters of environmental significance, to support the development of effective monitoring, mitigation and management measures.

A series of short factsheets provide summary information on GBA program results, methods, field investigations and research that underpin the program’s assessments in each GBA region. More information on each of these factsheets is available on the Factsheets landing page.

The final meeting of the Beetaloo GBA Region user panel was held on 28 April 2021.

Discussions from each user panel meeting are summarised in a communique and available through the Stakeholder Engagement webpage. 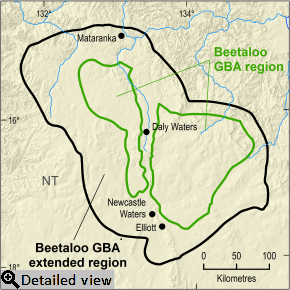