2.1.5.2.3 Hydraulic relationships between wetlands and aquifers

In addition to stream–aquifer interactions, there are also interactions between aquifers and wetlands, controlled primarily by regional-scale geological features pertaining to the geometry of bedrock aquifers or structural features. A detailed identification of such interactions will be conducted and reported in later products. An example for the Bremer river basin is given here.

The Bremer river basin (Figure 69) overlies the geological Laidley sub-basin of the Clarence-Moreton Basin. The thickness of the Clarence-Moreton Basin sedimentary sequences here is likely to be more than 2000 m, of which the Walloon Coal Measures comprise the uppermost 400 to 600 m. At the eastern edge of this depositional centre, the Clarence-Moreton Basin sedimentary sequences terminate against basement rock near the West Ipswich Fault. The potentiometric surface map of the Walloon Coal Measures in this area shows that the groundwater flow direction is generally towards this eastern margin of the basin. As the basin sedimentary sequences thin from more than 2000 m to zero, and as groundwater is unlikely to penetrate the low-permeability basement rocks outside the basin, it is likely that groundwater discharges to the surface, which can be expressed either as discharge into the Bremer River or as wetlands and/or springs. The presence of wetlands in this area provides further evidence to support this hypothesis.

Similar links between the structural framework and the geometry of aquifers are likely to exist in other parts of the Clarence-Moreton Basin near the basin margins, for example, in the Lockyer Valley and the Richmond river basin and Clarence river basin. 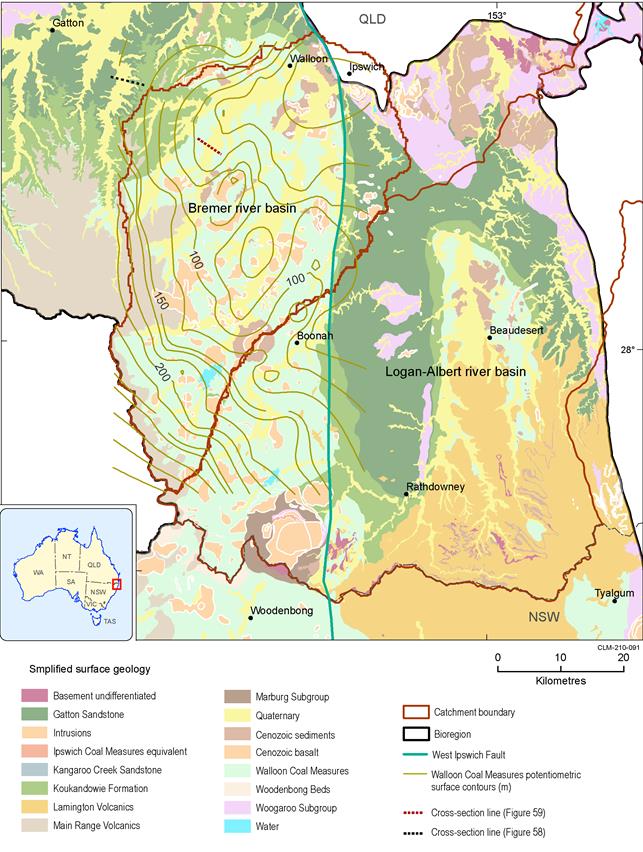