Three examples are shown from different river basins within the bioregion to highlight the usefulness of this approach and also some of the limitations. 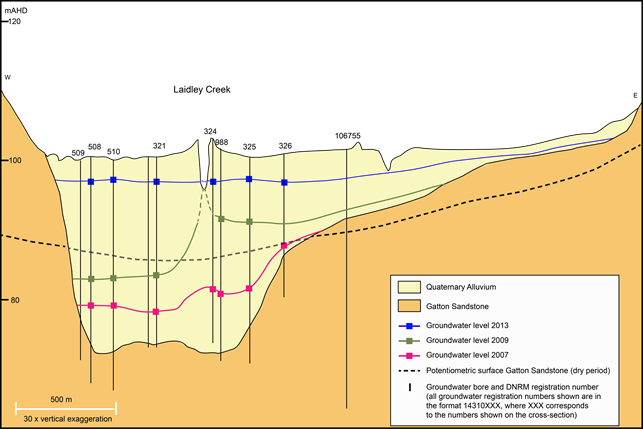 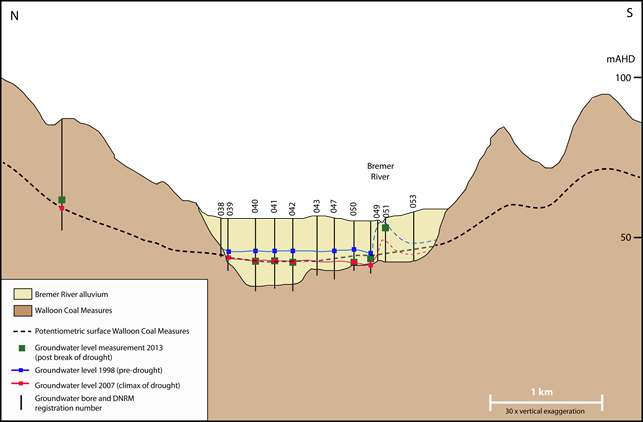 The response of groundwater levels to rainfall events or longer-term climate variability in the Richmond river basin is not as well constrained as in the Queensland basins due to a lack of groundwater observation bores. However, the incorporation of groundwater level surfaces into the three-dimensional geological model suggests that there was a substantial change from the drought to post-drought.

Some observations based on the cross-section and water level fluctuation are:

However, the spatial modelling of groundwater levels (using kriging interpolation, Section 2.1.3.3.1) is based on a small number of groundwater level measurements in this area, and the uncertainty associated with the modelling is therefore high as indicated by a high standard deviation (Section 2.1.3.3.1). In addition, due to the low relief of the ground surface in this wide floodplain, the 1-second SRTM DEM data may not adequately capture the variability of the ground surface topography.

Note the hydraulic relationships between the Richmond River and the alluvial aquifer and the change of the interpolated alluvial groundwater level during drought and post-drought conditions (Section 2.1.4). The topographic surface is based on the 1-second Shuttle Radar Topography Mission DEM data (Geoscience Australia and CSIRO Land and Water, 2010).