Salinity along the regulated part of the Hunter River is of particular interest because some of its tributaries have elevated stream salinities, it is a highly utilised water source, a receiving water body for discharges from industry and the focus of the Hunter River Salinity Trading Scheme (HRSTS). Prior to its introduction, irrigators were becoming increasingly concerned that saline discharges from the mining industry were increasing salinity in the river to a level unsuitable for irrigation.

Denman (210055), Glennies Creek (210127) and Singleton (210129) stream gauging stations are used as the reference sites along the Hunter River to monitor salinity levels relative to water quality objectives (NSW Department of Primary Industries, 2014b). The locations of these three reference gauging stations are shown in Figure 12. The flow ranges and salinity objectives for the three are summarised in Table 14.

Source: derived from NSW Department of Primary Industries (2014b)

Figure 14 to Figure 16 show time series of EC between 1995 and 2013 at Denman, Glennies Creek and Singleton, respectively. In all three salinity time series, a strong seasonal signal is evident with perhaps a longer three- to five-year cycle as well. At the three locations, salinities between 2001 and 2007 were on average lower and less variable than at other times in the record. This change corresponds to a dry period when flows in the river were dependent mainly on releases of relatively fresh water. In June 2007, a major storm occurred (often referred to as the Pasha Bulker event) which led to flood flows in the Hunter River. The sudden spike in river salinity after this event reflects the flushing of accumulated salts in the tributary streams, following an extended dry period. The pattern of on average higher, more variable salinity since June 2007 is consistent with a wetter period flow regime, when tributary inflows dominate Hunter River flows and dam releases are minimal.

At Denman (Figure 14), salinity levels have not exceeded 1200 µS/cm at any time during the period of record. Between 1995 and 2000, they averaged around 540 µS/cm. The period between 2000 and 2006 was characterised by on average lower salinity (465 µS/cm), and was followed by an increase in salinity from about 2007 to levels that are on average higher (621 µS/cm) than during the earlier periods of record.

At Glennies Creek (Figure 15), the salinity pattern is similar to that at Denman, but with higher mean salinity (750 µS/cm). Salinities have exceeded 1200 µS/cm on a number of occasions since 2007 and have regularly exceeded 900 µS/cm since 2007. 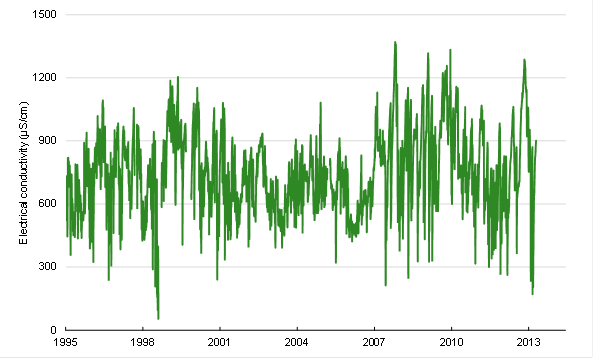 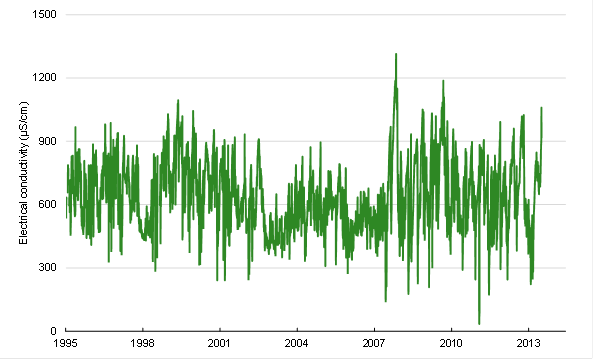 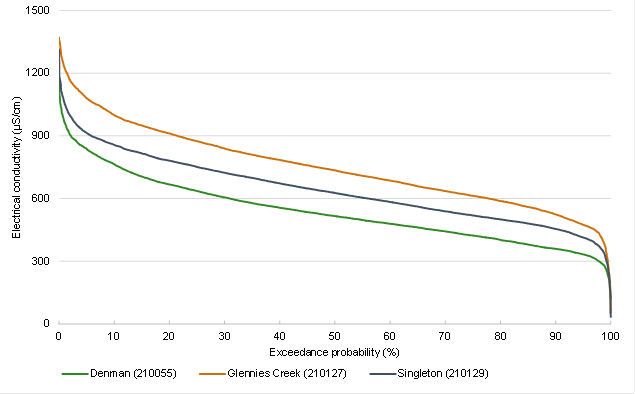 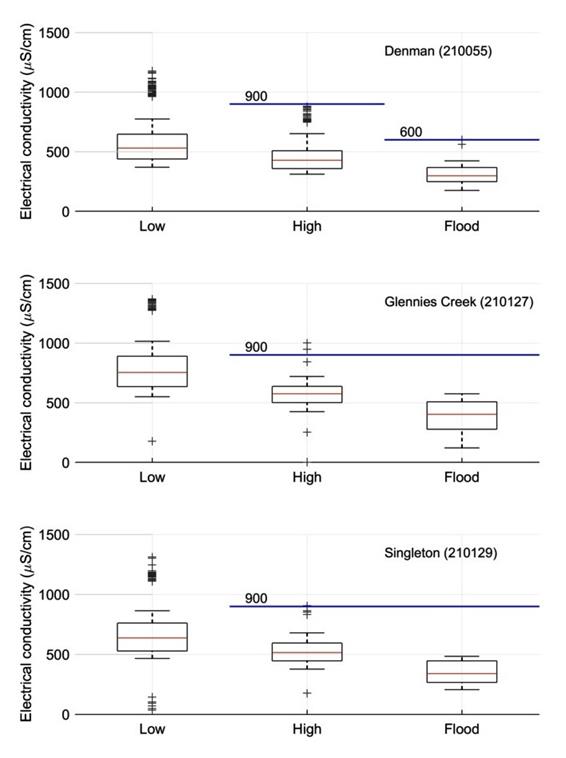 Figure 18 summarises the salinity data by streamflow category (Table 14) at the three reference sites. Presented this way, the pattern of decreasing salinity levels with increasing streamflow is evident, reflecting the change from the more saline, baseflow-dominated regime at low flows to the less saline, quickflow-dominated response at higher flows. At Denman during low flows, the range of recorded salinities is mostly between 450 and 650 µS/cm. At high streamflow and flood flows, the salinity targets of 900 µS/cm and 600 µS/cm, respectively, were not exceeded during the period of record. Downstream at the Glennies Creek and Singleton gauging stations, low flow salinities are almost always higher than 500 µS/cm, but tend to be around 500 to 600 µS/cm at high streamflow. At Glennies Creek there are two recorded occasions when salinity levels exceeded the target threshold of 900 µS/cm under high streamflow conditions, whereas at Singleton, stream salinities never exceeded the target threshold.