1.5.2.1.1 Stream salinities across the Hunter subregion

Recent changes in land cover and use in the river basin may have contributed to rising groundwater levels in some areas and an increase in the discharge of salt to streams (Environment Protection Authority, 2013). These anthropogenic land use changes include coal resource development (e.g. areas cleared of vegetation, service roads, and site processing facilities), power generation and agriculture. In particular, there has been concern in the community about the impact of mine water discharges on stream salinities in the Hunter River and implications for other users of river water. Crops vary considerably in their tolerance to saline water, but most crops can use water which has an EC value of up to about 700 µS/cm without loss of yield. However, for grapevines, an important commodity in the Hunter subregion, the threshold beyond which yields start to decline is about 1000 µS/cm; yields for lucerne start to decline at about 1300 µS/cm (NSW Department of Primary Industries, 2014a).

The Hunter River Salinity Trading Scheme (HRSTS) was introduced in 1995 to manage saline discharges from industry in the Hunter Regulated River downstream of Glenbawn Dam to Singleton. Under the scheme, industries are permitted to discharge industrial water to the river in a way that maintains the salinity of the river within acceptable limits. Thus, when the river is in low flow, no discharge is allowed; when the river is in high flow, limited discharge is allowed; and when the river is in flood, unlimited discharge is allowed. The total volume of salt permitted to be discharged by those in HRSTS is capped at 1000 salt discharge credits. Credits can be traded among licence holders. This gives each licence holder the flexibility to increase or decrease their allowable discharge from time to time. The impacts of HRSTS on stream salinities are not the focus of this section. A recent report by the Environment Protection Authority (2013) suggested that the scheme has had little impact on stream salinities.

There are 23 gauging stations which have more than 10 years of river salinity data in the Hunter river basin. Table 13 summarises the gauging stations and dates where EC levels are recorded at 15-minute intervals by DPI Water. The locations of these monitoring stations are shown in Figure 12.

aEnd dates are not always indicative of end of records, but of cut-off dates for inclusion in published datasets. 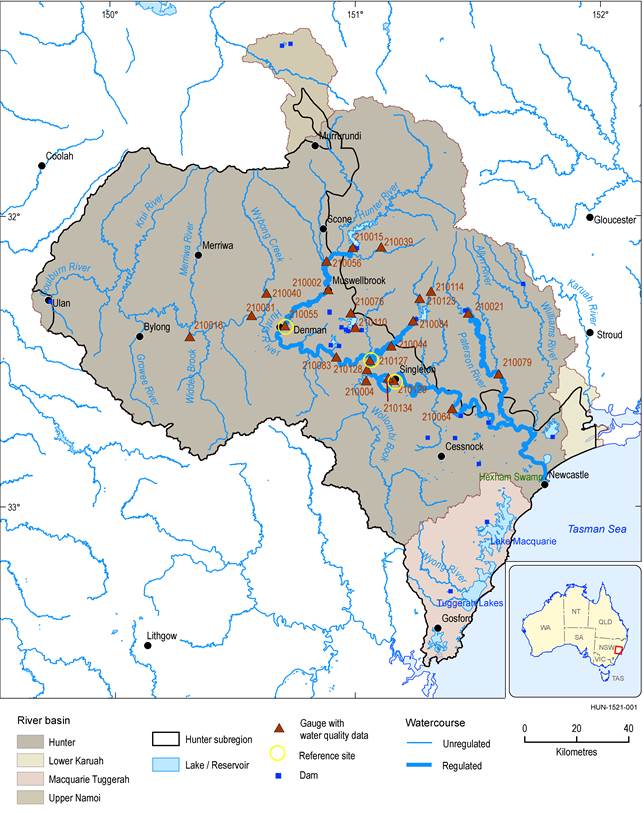 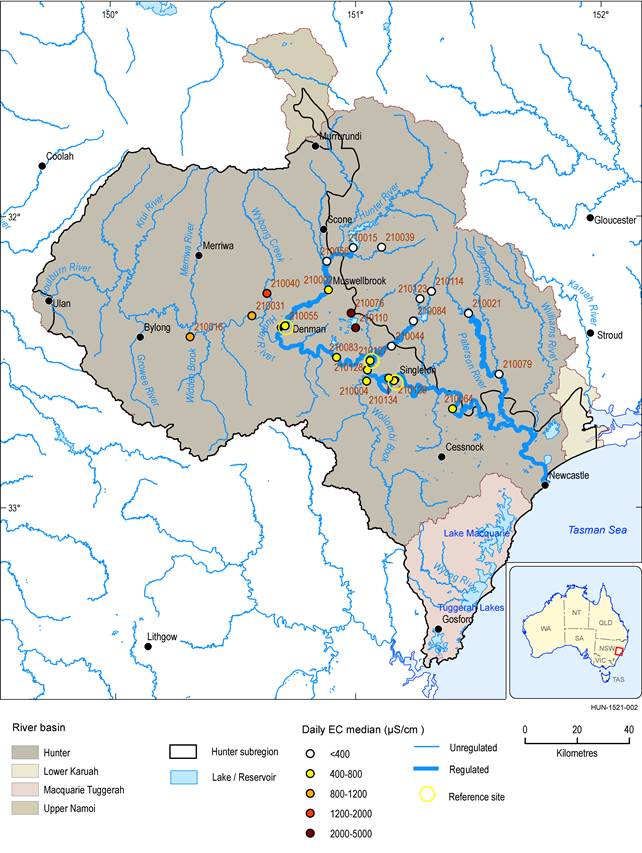