The Hunter river basin is a large river basin in coastal NSW with a contributing area of 21,437 km2, including a significant area in the north and east which falls outside the Hunter subregion boundary. The Hunter River rises in the Liverpool Ranges, and flows generally south and then west into Lake Glenbawn, created by the construction of Glenbawn Dam. Downstream of the dam, the Hunter River maintains a south-west direction to its junction with the Goulburn River before turning eastward towards Newcastle and the sea (Figure 3). Its five main tributaries, in terms of runoff contributions, include the Williams, Paterson and Goulburn rivers, Wollombi Brook and Glennies Creek.

Downstream of Glenbawn, Glennies Creek and Lostock dams, streamflow to and along the Hunter River is regulated by dam releases (Figure 3). Flow regulation means that streamflow is influenced by releases of water from the major storages. Elsewhere, streamflow is unregulated and the flow regime is primarily a response to rainfall.

In a surface water account, water availability is defined in terms of water held in storages, including engineered storages and natural storages (e.g. the river itself) and/or volumes of water that are permitted to be extracted for consumptive use within a water management framework. Inflows are catchment runoff contributions to river flow, usually measured at tributary outlets or inflows to large storages. Outflows refer to river flows that exit the water accounting area, which in the Hunter subregion are mostly outflows to coastal lakes, estuaries and the sea, and actual extractions for use. The remainder of this section summarises for the Hunter river and Macquarie-Tuggerah lakes basins:

A summary of data gaps relating to surface water accounts is provided at the end of the section. 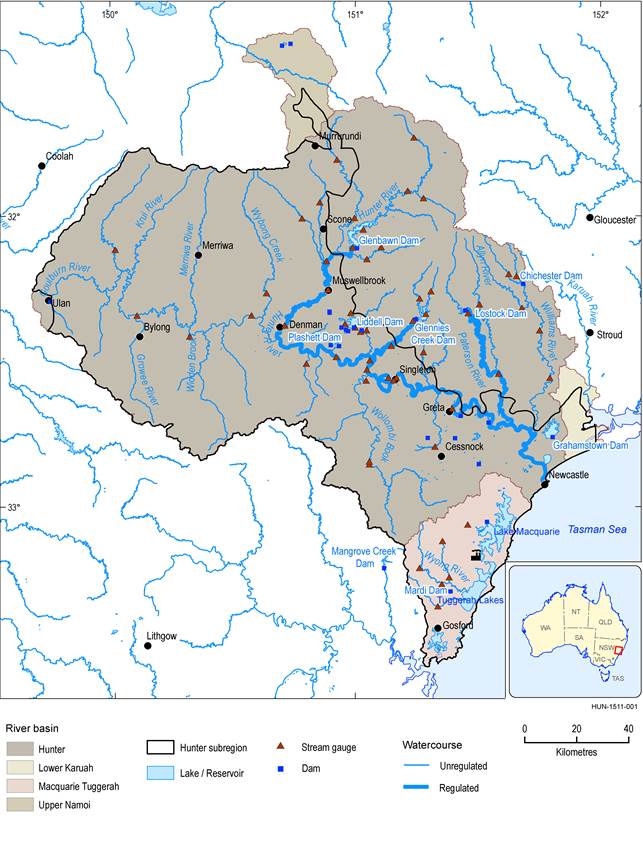