This section is not a comprehensive review of all aspects of surface water and groundwater and their connectivity within the Sydney Basin bioregion. Details of groundwater aquifers and flow are included in Section 1.1.3 (geology) and Section 1.1.4 (hydrogeology), while details of the bioregion’s surface water stores and river flow are contained in Section 1.1.5 (hydrology). Where appropriate, cross references are made to these sections, rather than recapitulating details provided there.

Water courses in the Sydney Basin bioregion are generally considered to be gaining with respect to groundwater (Green et al., 2010). The general character of groundwater and surface water connections are described in this section according to their geological settings. These characterisations are greatly simplified relative to the full description of Sydney Basin geology.

The area dominated by the Hawkesbury Sandstone extends through the central and eastern sections of the bioregion, and is absent only south of Kiama and to the north and west of Lithgow (Figure 31 in Section 1.1.4). This region of the geological Sydney Basin is referred to as the Southern Coalfield (NSW RE, 2015) (Figure 23 in Section 1.1.3). Three main active groundwater groups have been defined by Green et al. (2010):

Groundwater flows have been described by Green et al. (2010, Figure 3) as:

On the western side of the bioregion the topography becomes more rugged toward the Blue Mountains and Lachlan Fold Belt. This region of the geological Sydney Basin is referred to as the Western Coalfield (NSW RE, 2015) (Figure 23 in Section 1.1.3). It mainly occupies an extensive plateau of sandstone which is dissected by deep canyons and steep-sided valleys. The Illawarra Coal Measures outcrop at the surface along the western edges of the bioregion, and are deeper within some of the lower valleys (RW Corkery Pty Ltd, 2011). The upper geologic unit comprises layers of shale, sandstone and conglomerates mostly assigned to the Narrabeen Group, but it may be a sub-unit of the Hawkesbury Sandstone that lacks the usual geological markers used to identify it (Lee, 2009). The next layers form the Illawarra Coal Measures, with layers of interburden material and coal seams.

Rainfall recharge and groundwater discharge in these upland areas are tied to the highly dissected nature of the topography. Most flows in these highly dissected landscapes are considered local-scale, dominated by topography and specific local layering of low conductivity shale layers.

The west to east topography of the Sydney Basin bioregion starts in the Western Coalfields with relatively rugged terrain in the dissected sandstone and shale plateaux of the Blue Mountains plateau and the Illawarra plateau. Toward the Central Coalfields there is more undulating and flatter terrain along the coast, typically with a dramatic change in elevation between the two coalfields associated with the Lapstone Monocline (Figure 46). Groundwater flow paths are controlled topographically in the more upland areas, discharging locally to springs and streams. Over larger spatial scales, flow paths are longer and discharge at breaks-of-slope where the hillslopes meet the floodplains of major rivers. At the largest scales of flow, groundwater discharges into the alluvial deposits and floodplains of the major rivers and contributes baseflow (Figure 46). This regional recharge occurs around the northern and western margins of the Hawkesbury Sandstone (Figure 47). 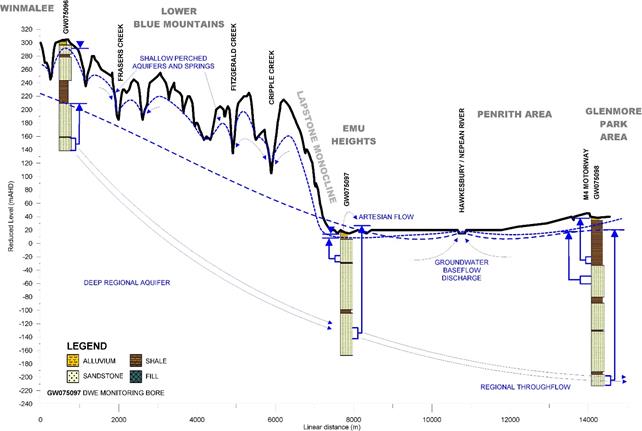