In this section, the stratigraphy and rock types of the Southern and Western coalfields (Figure 28) are presented, with a focus on the coal-bearing stratigraphic units and main non-coal units. For reasons identified in Section 1.1.3.1, the Central Coalfield is not specifically dealt with here, but the available data indicates that the stratigraphy of the Central Coalfield closely mirrors that of the Southern Coalfield (Haworth, 2003). A detailed analysis of all stratigraphic units recognised in the Australian Stratigraphic Units Database (Geoscience Australia and Australian Stratigraphy Commission, 2016) is not included here. Further information about the coal-bearing units, current mining operations and proposed development in this bioregion is provided in companion product 1.2 for the Sydney Basin bioregion.

Known from the southern part of the Sydney Basin (Southern Coalfield), the Talaterang Group was deposited in the early Permian through fluvial transport within deeply incised valleys. These are thought to be remnant glacial features located within early formed north-trending fault-bound sub-basins (Herbert, 1972; Brakel, 1991, p. 14; Tye et al., 1996) which rest directly on the underlying basement rocks (Ward and Kelly, 2013; Tye et al., 1996). The Talaterang Group is composed of the Badgerys Breccia, Clyde Coal Measures, Pigeon House Creek Siltstone and Wasp Head Formation (Figure 28; Geoscience Australia and Australian Stratigraphy Commission, 2016). The Clyde Coal Measures formed in a transgressive depositional cycle in the south of the Sydney Basin, with marine transgression moving across the basin from the east to the west (Brakel, 1991, p. 15). The formation of the Clyde Coal Measures has been attributed to the marshlands of a delta complex (Evans et al., 1983), where the mud-rich sediment was deposited in northerly flowing channels (Tye et al., 1996). As the rising ocean moved westward across the Sydney Basin the Clyde Coal Measures were deposited in paralic zones, forming lenses of coal (Evans et al., 1983; Brakel, 1991, p. 15). The Talaterang Group contains limited economic coal resources due to the thin nature of coal seams within the Clyde Coal Measures (Hutton, 2009, p. 43), although some mining has occurred historically.

Coincident with the early Permian marine transgression was the deposition of thick sand and silt units of the Shoalhaven Group (Figure 28) across the Southern and Western Coalfields. These were deposited in variably low to high energy, fluvial to marine (shelf) environments (Brakel, 1991, p. 15; Tye et al., 1996) and mainly comprise sandstone with interbedded shale and mudstone (Hutton, 2009, p. 43). The shale and mudstone units represent marine influenced deposition, whereas the sandstone units are fluvial to terrestrial in origin (Hutton, 2009, p. 43). The Shoalhaven Group consists of the Pebbley Beach Formation, Snapper Point Formation, Wandrawandian Siltstone, Nowra Sandstone, Berry Siltstone and Broughton Formation (Geoscience Australia and Australian Stratigraphy Commission, 2016). The Shoalhaven Group also contains a coal-bearing unit of low economic importance, the Yarrunga Coal Measures (Yoo et al., 2001, p. 9; Hutton, 2009, p. 43). In the Southern Coalfield the Shoalhaven Group overlies the Talaterang Group. Within the Western Coalfield the Shoalhaven Group is divided into the sandstone rich Snapper Point Formation and the Berry Siltstone which are separated by an unconformity relating to depositional hiatus (Yoo et al., 2001, p. 10). 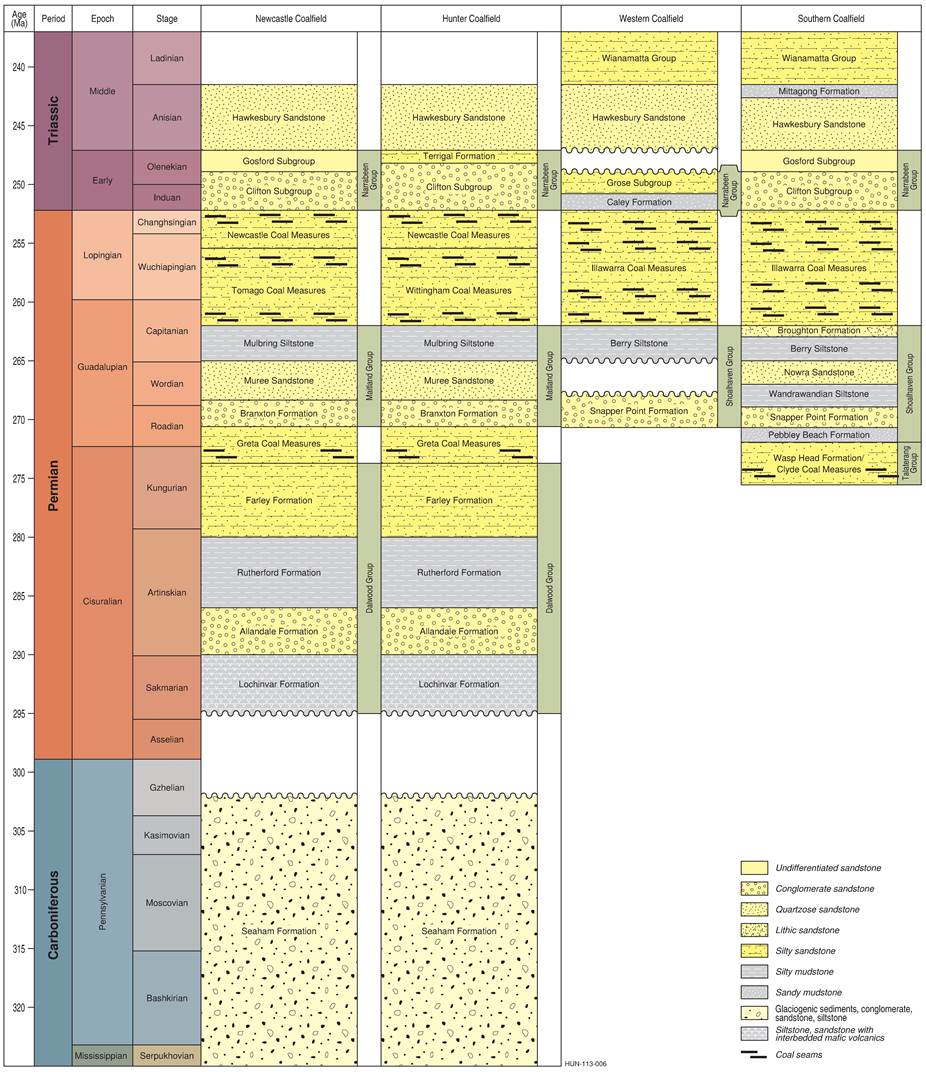 The Nile Subgroup was formed in a prodelta to lower delta plain environment (Yoo et al., 2001, p. 15). The Cullen Bullen Subgroup formed in fluvial to delta and alluvial plain environments (McVicar et al., 2015). The Charbon Subgroup formed as a delta system with some marine influence (McVicar et al., 2015). The Wallerawang Subgroup is composed of alluvial and floodplain deposits (Yoo et al., 1991, p. 240). The coal measures vary in thickness across the Western Coalfield and are thinnest near the western boundary (50 m), and thickest near the eastern boundary (900 m) (Hutton, 2009, p. 51; Ward and Kelly, 2013). The Lithgow, Lidsdale, Ulan and Katoomba coals are the dominant units of economic interest in the Western Coalfields, with the Irondale Coal and Middle River Coal Member of localised interest (Ward and Kelly, 2013). The deepest of these seams, the Lithgow Coal, is up to 600 m below the surface at its deepest, but occurs at the surface in some localised areas of lower elevation. The Katoomba Coal Member is the shallowest unit and outcrops at the surface or is close to the surface over much of its extent. 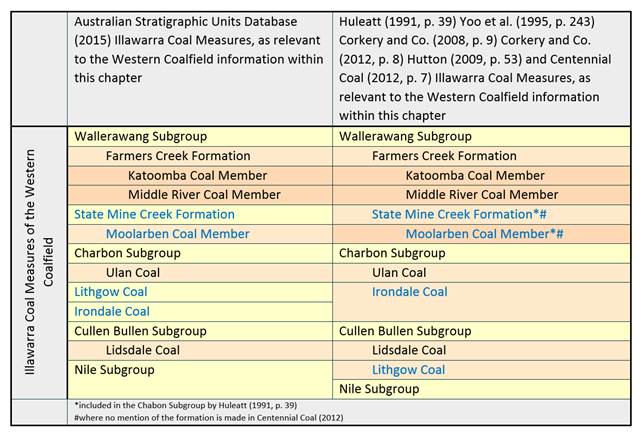 The subdivision of the Narrabeen Group of the Western Coalfield is considered uncertain due to the lack of drilling to significant depths and so correlation of the group in the north and the south is approximate (Hutton, 2009, p. 51). The sequence has a maximum thickness of 656 m but is thinner near the west of the coalfield (Yoo et al., 2001, p. 52). However, in the north of the Western Coalfield the Narrabeen Group is reminiscent of the Digby Formation (part of the stratigraphy in the neighbouring Gunnedah Basin) and is composed of conglomerate, sandstone, quartz sandstone and siltstone (Yoo et al., 2001, p. 52).

The Triassic aged quartz-rich Hawkesbury Sandstone has a maximum stratigraphic thickness of between 250 and 290 m (Conaghan and Jones, 1975; Australian Stratigraphic Database, 2015). Some mudstone is present within this formation, with Conaghan and Jones (1975) estimating a mudstone to sandstone ratio of 20:1 in favour of sandstone. Although some refer to the Hawkesbury Sandstone as a massive sandstone unit (Jones and Rust, 1983), Conaghan and Jones (1975) referred to known areas of cross-sets in a ‘sheet facies’ where cross-sets range in size from a few centimetres to a few metres. Deposition is thought to have been influenced by strong currents in shallow marine, littoral, estuarine, fluvial, lacustrine or aeolian environments (Conaghan and Jones, 1975). A braided stream environment with massive (up to 15 m) floodplain deposit formation is described for the massive sandstone, and was favoured among researchers (Jones and Rust, 1983). Miall and Jones (2003) found that fluvial modelling of the Hawkesbury Sandstone indicated channel belts in excess of 2.5 km wide. Deposition is thought to have occurred in a north-easterly direction (Ward, 1972). Towards the eastern boundary of the Western Coalfield the Hawkesbury Sandstone reaches a thickness of around 244 m, thinning to the west and becoming only 52 to 55 m thick within a minimum distance of 25 km (McVicar et al., 2015).

The Mittagong Formation is a coal-barren unit, formally known as the Passage Beds, which represents the gradational change from the underlying Hawkesbury Sandstone to the overlying Wianamatta Group (Bamberry, 1991, p. 47). Interbedded shales and fine-grained sandstone layers have maximum thickness of 15 m (Bamberry, 1991, p. 47; Ward and Kelly, 2013).

Jurassic and Cretaceous sedimentation took place in the north of the Western Coalfield, depositing the Purlawaugh Formation, Pilliga Sandstone and the Bungil Formation (Yoo et al., 1995, p. 234); these are discussed in Section 1.1.3 of companion product 1.1 for the Hunter subregion (McVicar et al., 2015). However, to the south of the Western Coalfield and within the Southern Coalfield, the deposition of Jurassic sedimentary rocks is speculative, as there is no existing stratigraphic record for that time period (Philp and Saxby, 1980). From the Cretaceous into the Quaternary, sedimentary processes continued across the Sydney Basin, depositing alluvium, colluvium, gravels, sands, silts, clays, peat, cemented conglomerates, and laterites (Herbert, 1983a; Stroud et al., 1985; Watkins et al., 1997; Thomas et al., 2013). The distribution of surface geology in the Sydney Basin bioregion (Figure 24) can be described as dominantly Triassic and Permian, with notable deposits of Quaternary alluvium.