The population of the Sydney Basin bioregion is concentrated within the area occupied by the Greater Sydney region. The estimated resident population of the area known and reported by the Australian Bureau of Statistics as the Greater Sydney Greater Capital City Statistical Area (GCCSA) at 30 June 2014 was 4.84 million, which is about two-thirds of the total population of NSW (Australian Bureau of Statistics, 2015). This area includes Central Coast and Blue Mountains. The Central Coast is not within the bioregion, so the number represents a slight overestimate. The Illawarra and Southern Highlands and Shoalhaven statistical local areas (ABS SA4 level) were estimated to have 296,845 and 146,388 residents in 2014 (Australian Bureau of Statistics, 2015), putting the total for the Sydney Basin bioregion at around 5 million.

After Sydney, Wollongong is the next largest settlement in the Sydney Basin bioregion. The combined populations of the Southern Highlands towns, including Mittagong, Bowral and Moss Vale, constitute the next largest population centre, followed by Nowra. Table 8 provides the 2014 populations for the five main urban centres within the bioregion. Figure 14 illustrates the population density distribution with major concentrations around Sydney and Wollongong and along a corridor west of Sydney to the Blue Mountains. Most of the coastal zone is well developed, as is the corridor from Sydney through the Southern Highlands towns around Berrima and onto Goulburn. 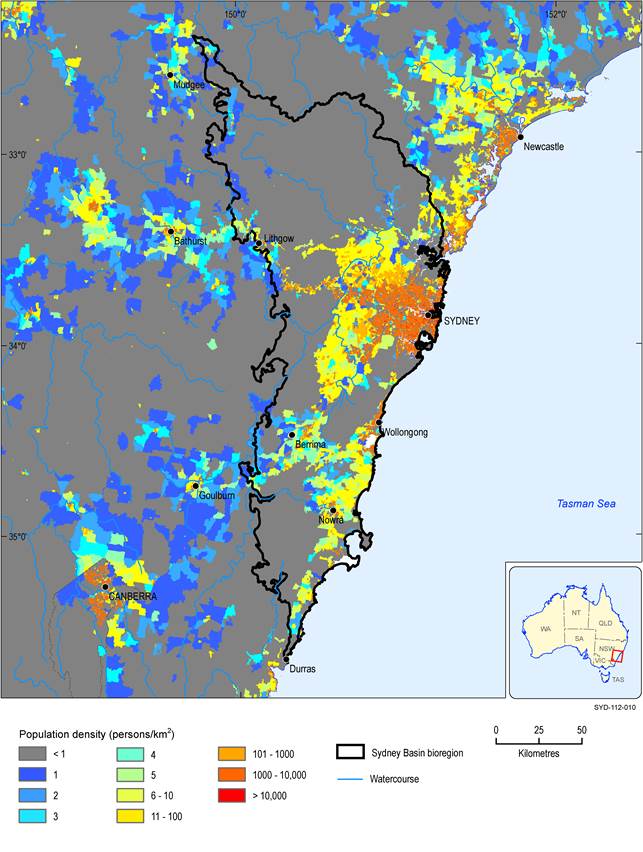 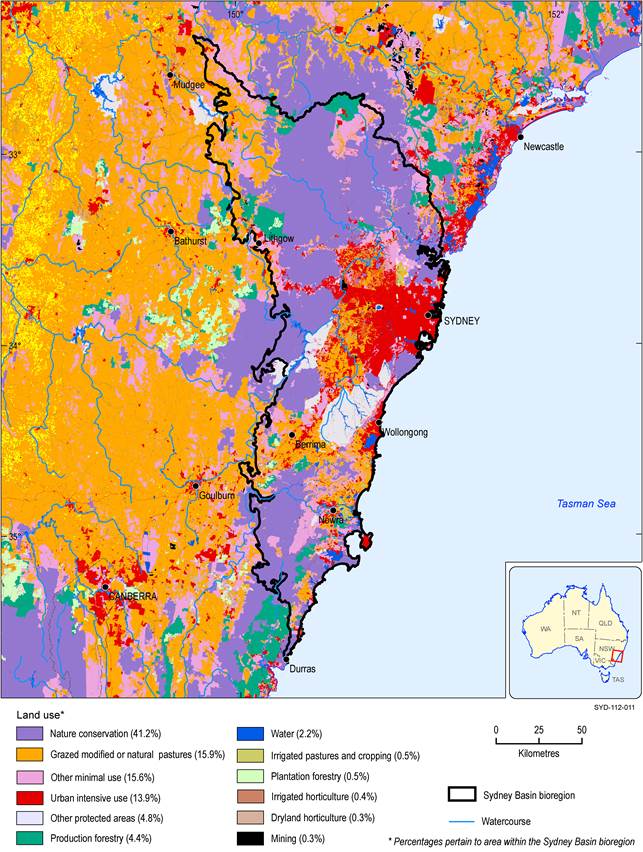 Figure 15 Land use in the Sydney Basin bioregion

A number of small, but significant protected areas can be seen to the south-west of Sydney in Figure 15. These protected areas are owned and managed by WaterNSW as part of Sydney’s main water supply catchments. In Figure 16, it can be seen that they encompass the catchments contributing to the Cordeaux, Cataract, Avon and Nepean reservoirs (the Metropolitan Special Area), to the Woronora Reservoir (the Woronora Special Area) and parts of the contributing area to Warragamba Dam and the Warragamba River downstream of the dam wall (Warragamba Special Area). In addition to their value for a clean, reliable water supply, some of these areas are environmentally significant because they contain many relatively undisturbed, regionally significant vegetation communities, including upland swamps (see Section 1.1.7). The Metropolitan and Woronora special areas are also economically significant because of the underlying coal seams of the Southern Coalfield, and existing mining leases extend well into the protection areas (shown in Figure 16). Longwall mining is currently undertaken under the Metropolitan and Woronora special areas, and there are proposals to expand further into these areas (see the coal and coal seam gas resource assessment in companion product 1.2 for the Sydney Basin bioregion (Hodgkinson et al., 2018)). Public concern about the potential loss of streamflow, and associated loss of habitat, have made this a particularly controversial issue. Loss of flow along a 2 km reach of the Waratah Rivulet, an important tributary to the Woronora Reservoir, following the collapse of longwall panels beneath the streambed in 2006, and degradation of some upland swamps are well documented (e.g. NSW Chief Scientist and Engineer, 2014; Rivers SOS, 2016; NSW Office of Environment and Heritage, 2011)). In March 2016, the Planning and Assessment Commission rejected a proposal from Russell Vale mine to expand into the Special Area on the grounds of potential water losses (as much as 2.6 GL/year) from WaterNSW reservoirs (NSW Planning and Assessment Commission, 2016). Concerns that the mines could potentially drain two upland swamps also formed part of the decision.

There are pockets of production forestry throughout the bioregion, including north of Wollemi National Park, north of Lithgow, in the Southern Highlands near Berrima and to the south of Nowra (Figure 16). Grazing of natural and modified pastures occurs at the western margins of Sydney, along the coastal zone and in the Southern Highlands near Berrima. Mining accounts for 0.3% of the mapped land uses in the bioregion (Figure 15).

In October 2013, the NSW Government introduced coal seam gas (CSG) exclusion zones for existing residential zones in all local government areas in NSW (NSW Government, 2015). In January 2014, ‘future residential growth areas’ were added to the CSG exclusion area in the Sydney Basin bioregion. The exclusion zones ban new CSG activity inside and within a 2 km buffer around existing and future residential areas. Together, these areas total 5748 km2 or 23.3% of the bioregion. Also in January 2014, areas of ‘biophysical strategic agricultural land’ were identified across NSW that were deemed necessary to support the state’s $12 billion/year agricultural industry (NSW Government, 2014). These areas correspond to land having high quality soil and water resources capable of supporting high levels of agricultural production. Areas of biophysical strategic agricultural land cover 36.5 km2 (1.5%) of the bioregion. The three types of exclusion zone are shown in Figure 17. There is some overlap between these zones, which means a total area of 5942 km2 or 24.1% of the bioregion is excluded from CSG development. The CSG exclusion zones do not affect the existing arrangements for non-CSG types of mining and petroleum activity. In addition to the exclusion zones, mining and petroleum production are generally prohibited in areas designated as conservation zones (i.e. national parks and other reserves) and in some land zoned for environmental protection within NSW, which together represent 46% of the bioregion. The exclusion zones relate to both the land surface and all geological strata below, this means no CSG can be extracted using horizontal wells located below the exclusion zones. 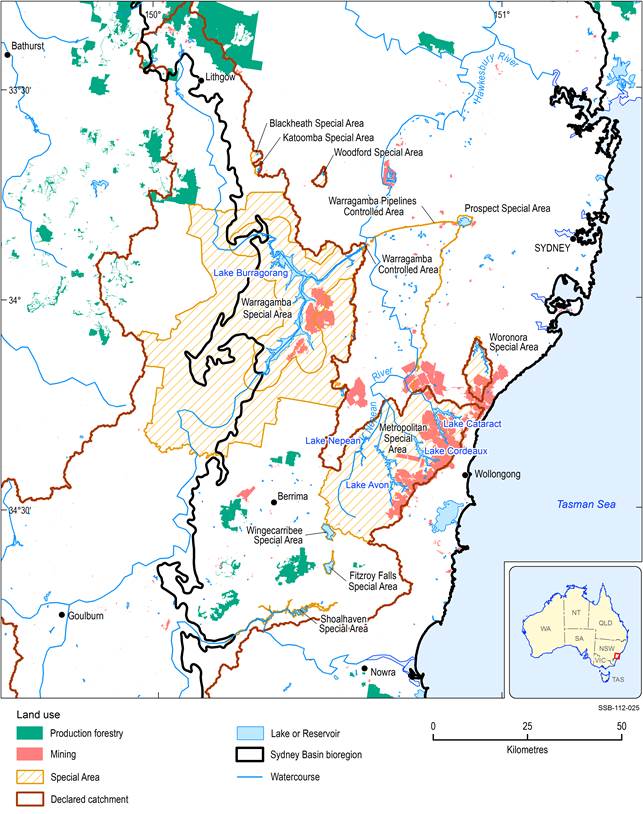 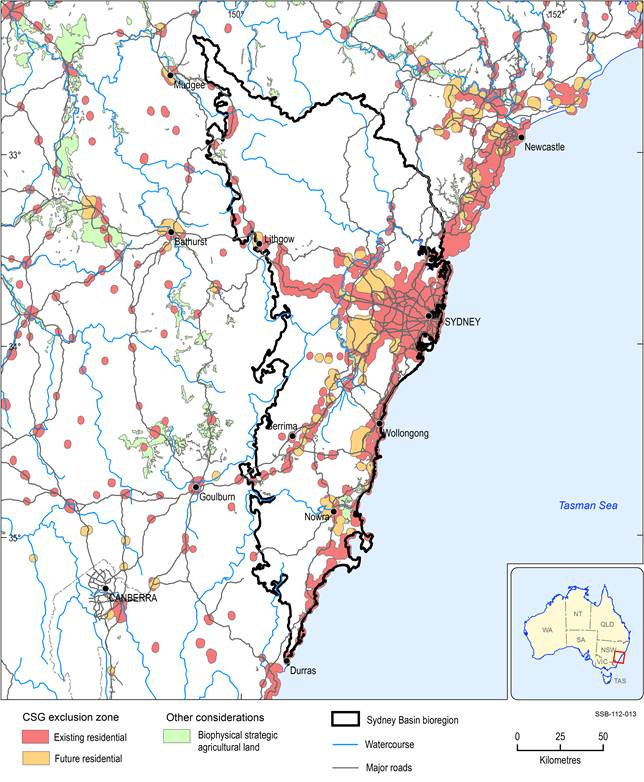