The Sydney Basin contains rocks of Late Carboniferous to Middle Triassic age (Geoscience Australia, 2015a). These rocks are a mixed assemblage of marine and non-marine sedimentary rocks, predominantly siliclastics and coals. The maximum thickness of the basin’s entire sedimentary sequence varies between 4.5 and 6 km. The Sydney Basin initially formed as a rift basin, and subsequently experienced thermal subsidence and foreland basin development stages (Ward and Kelly, 2013). The basin spans approximately 20% of the NSW coastline, covering approximately 400 km from just south of Durras in the south to just north of Newcastle (Cadman et al., 1998, p. 141; Ward and Kelly, 2013). The basin occurs both onshore and offshore (see Figure 23; Cadman et al., 1998, p. 141; Geoscience Australia, 2015a), with approximately 36,000 km2 onshore and 28,000 km2 offshore (Stewart and Alder, 1995; Ward and Kelly, 2013; Geoscience Australia, 2015a). The Sydney Basin forms part of a much greater late Paleozoic to early Mesozoic sedimentary basin complex known as the Sydney-Gunnedah-Bowen Basin (SGBB) (Figure 23, Figure 25).

This so-called ‘super basin’ spans from central Queensland in the north to the NSW central coast, with the Sydney Basin forming the southernmost portion (Figure 25; Brakel, 1991, p. 10; Cadman et al., 1998, p. 141; Haworth, 2003; Ward and Kelly, 2013; Geoscience Australia, 2015a). Throughout much of its development, the SGBB formed in a back-arc tectonic setting, adjacent to a subduction zone (Bray et al., 2010). Korsch and Totterdell (2009) identified three dominant phases of basin development: early Permian extension, thermal subsidence in the middle Permian and later foreland loading during the late Permian, which continued into the Middle Triassic. 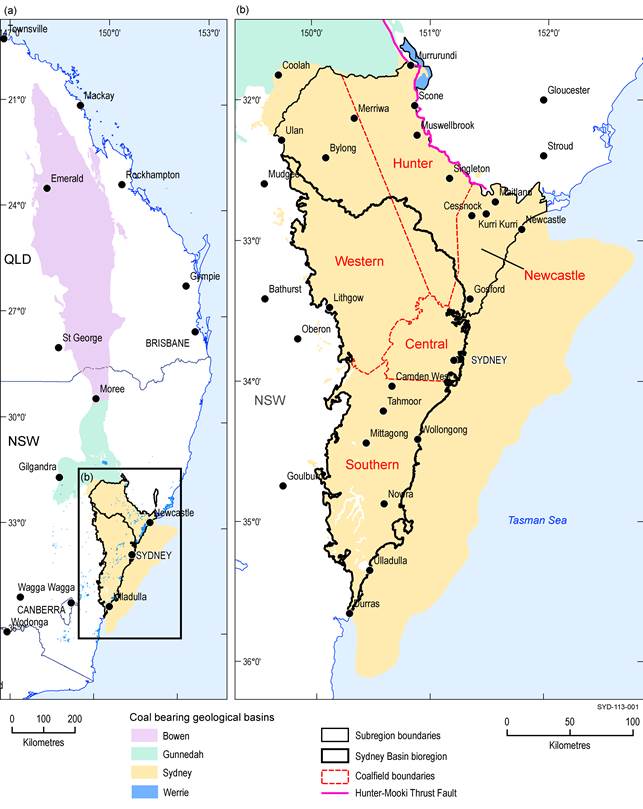 Figure 23 Geological basins and coalfields of the Sydney Basin bioregion 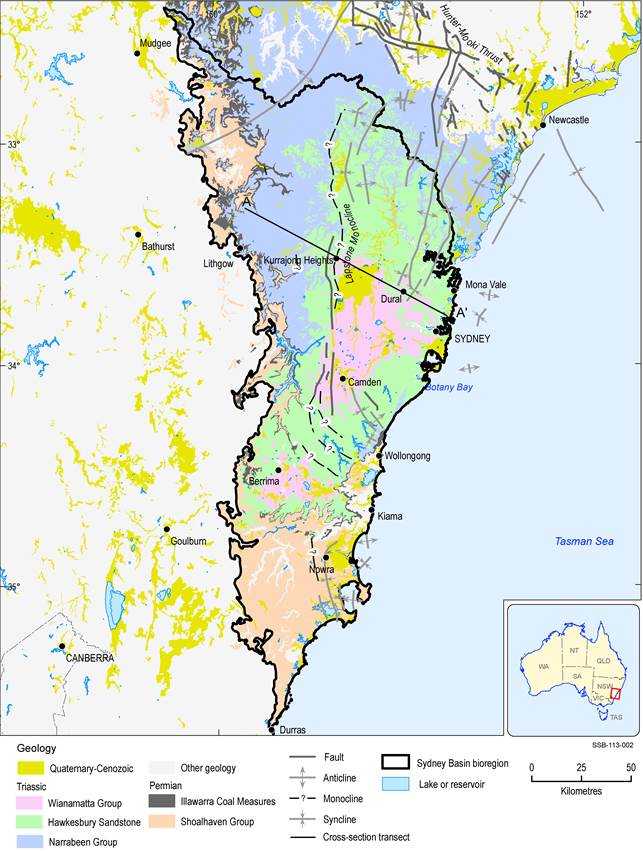 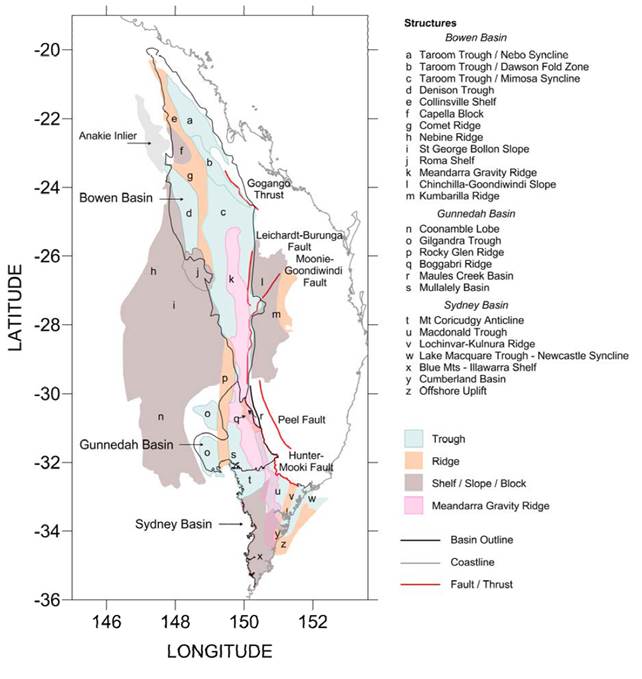 The older (prior to late Permian) sedimentary rocks of the Sydney Basin were originally deposited due to glacially influenced marine sedimentation, with some volcanic influence and minor terrestrial deposition (Brakel, 1991, p. 14; Ward and Kelly, 2013). These terrestrial units are more common in the north of the Sydney Basin and are generally considered coal-bearing (Ward and Kelly, 2013). Younger sediments (late Permian and younger) are dominantly terrestrial and more coal-rich (Brakel, 1991, p. 14; Ward and Kelly, 2013) and are considered to be of greatest economic importance in the Sydney Basin (Ward and Kelly, 2013). There are notable differences in rock types across the basin (Ward and Kelly, 2013) and, as such, stratigraphic divisions are made separately for the five coalfields. Sedimentation in the Late Carboniferous and early Permian formed the oldest preserved units, and probably continued without significant disruption into the Jurassic, although subsequent widespread erosion has removed all traces of strata from the Middle Triassic to the Jurassic – hence the existence of these rocks is speculative (Philp and Saxby, 1980). Early Permian marine transgression over much of the basin was followed by a late Permian regression; with the lower Permian marine sequences overlain by widespread coal-bearing units (Brakel, 1991, pp. 14–21). The main exception to this occurred in the northern-most portion of the basin where a middle Permian regression locally formed the Greta Coal Measures (Brakel, 1991, pp. 14–21). The lower Permian strata thicken to the north of the basin whereas the late Permian and Triassic strata thin northwards (Philp and Saxby, 1980). All strata thin over the western margin of the basin where the basement rock is topographically higher, Figure 26.

The Sydney Basin is divided into several major structural zones, including a series of north to north-east trending ridges and troughs in the north-east of the basin (Figure 27). The central Sydney Basin, commonly referred to as the Inner Sydney or Cumberland Basin (Bembrick et al., 1973; Jones and Clark, 1991; Haworth, 2003; Branagan, 2009; Bray et al., 2010) is a structural low, reflected in the topography, surrounded by a series of elevated plateaux (Figure 27; Haworth, 2003). This particular sub-basin is largely urbanised and is described as the lowest lying structural feature of the Sydney Basin (Ward and Kelly, 2013). The surrounding topographic highs (including the Woronora, Blue Mountains and Hornsby plateaux) form structural barriers that isolate the central basin (Ward and Kelly, 2013).

The Cranky Corner, Gloucester and Myall basins sit outside the northern boundary of the Sydney Basin, but have at times been referred to as detached pockets of remnant Sydney Basin (Korsch et al., 2009; Ward and Kelly, 2013; Brakel, 1991, p. 10). Geoscience Australia (2015b) refers to the Myall Basin (also referred to as Myall Syncline) as an outlier of the Sydney Basin. The Cranky Corner and Gloucester basins are currently recognised as separate basins containing stratigraphy of a similar age to the Sydney Basin. The hydrogeological Botany Basin is also of note due to its importance to hydrology (Griffin, 1963, p. 6) though it has had limited use throughout geological literature. In terms of location, the Botany Basin sits to the immediate south of the City of Sydney, encompassing part of Sydney itself and the suburbs of Marrickville, Botany, Randwick, Rockdale and Sutherland Shire (Griffin, 1963, p. 8) and extends into Botany Bay. The basin is approximately 8 x 8 km at its maximum width and length. The geology of the Botany Basin is that of a trough feature, largely filled with Triassic aged deposition (Douglas Partners, 2007, p. 5).

The Lapstone Monocline, Kurrajong Fault, Lochinvar Anticline, Kulnura Anticline and Lake Macquarie Syncline form the dominant north-trending basin structures (Ward and Kelly, 2013). These structures are the result of either tectonic movement during the Permian and Triassic or the reactivation of older basement structures (Stewart and Alder, 1995; Belvin et al., 2007; Ward and Kelly, 2013). In the southern part of the Sydney Basin there are also some synclines, anticlines and faults that trend north-westerly (Ward and Kelly, 2013). The Blue Mountains Shelf and the Illawarra Shelf are separated from the rest of the basin by a series of faults and monoclines thought to represent a possible older basement structural feature (Harrington and Brakel, 1981, p. 10; Brakel, 1991, pp. 11–12). The remaining Sydney Basin can be thought of as a series of troughs and ridges (Brakel, 1991, p. 11). During the Permian, when coals were being deposited, the Dome Belt (a series of anticlines and dome structures) of the Hunter Valley region is interpreted to have been forming (Brakel, 1991, p. 12). 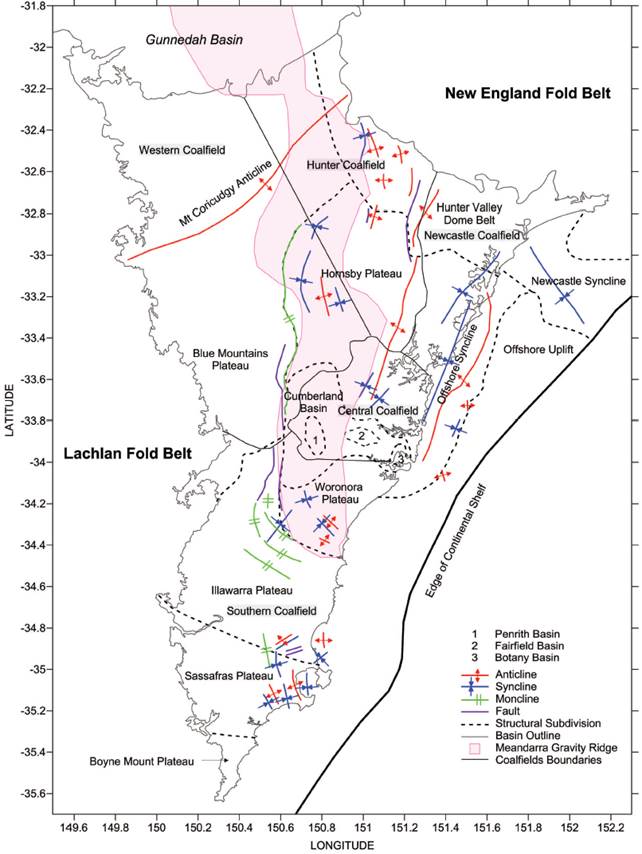 The Western Coalfield is marked by a series of north-trending monoclines that form the dominant structural features of the basin, with some associated faulting (Hutton, 2009, p. 51). The Mount Tomah Monocline is the dominant structural feature of the Western Coalfield and separates the Wollar and Blue Mountains shelves from the Murrurundi Trough and the Macdonald Trough (Yoo et al., 2001, p. 57). The Mount Coricudgy Anticline is a basement growth structure sitting 2 km above the base of the Macdonald Trough (Yoo et al., 2001, p. 57). The other prominent structural feature is the Lapstone Structural Complex, a north-trending monocline and fault system within the Macdonald Trough (McVicar et al., 2015). The Kurrajong Fault is a major high-angle reverse fault within the coalfield which dips eastwards (McVicar et al., 2015). Localised small throw faults are evident in some locations (Hutton, 2009, p. 51).