Downstream of Narrabri the flow regimes of the Namoi River are significantly reduced and floodwaters spread out over vast floodplains supporting many small lagoons, wetlands and anabranches as well as floodplain runners and extensive areas of floodplain woodlands (Commonwealth Environmental Water Office, 2012). A number of aquatic species protected under state and federal legislation occur in the Namoi river basin. Four aquatic species known to occur in the river basin are listed as endangered in the NSW Fisheries Management Act (see Table 17).

There have been a number of mapping and categorisation programs for wetlands of the Namoi river basin. Early mapping by Green and Dunkerley (1992) was followed up with mapping exercises by Hale et al. (2006) and a wetlands assessment and prioritisation by Eco Logical Australia (2008 and Figure 49). Approximately 2766 wetlands totalling 46,398 ha have been mapped in the Namoi river basin (Eco Logical Australia, 2008). Of these, 1829 were identified as being natural wetlands and 937 identified as being artificial wetlands (dams, weirs, storages, etc.) (Commonwealth Environmental Water Office, 2012). Using spatial analysis, Eco Logical Australia (2008) conducted simple hydrological assessments finding that nearly half of the wetlands in the Namoi river basin had experienced a 1-in-2 year flood event. Eco Logical Australia (2008) also developed a prioritisation framework that ranked wetlands based on ecological values and exposure to threats. Subsets of the wetlands were identified for field sampling that included characterisation of vegetation hydrology and disturbance regimes. Classification of wetlands was based on the New South Wales wetland monitoring, evaluation and reporting (MER) classification scheme that includes climate, wetland type, water regimes and vegetation.

The wetland assessment and prioritisation process has provided important baseline information on the ecological values and associated threatening processes for wetlands of the Namoi. While Lake Goran is the only nationally recognised wetland, Eco Logical Australia (2008) identified several other wetlands that may be of regional significance. Twenty one natural wetlands have wetland dependent threatened species within a 500 m radius.

Major threats to wetlands throughout the Namoi are land use, salinity and water regulation. Key threatening processes identified on the New South Wales threatened species list are shown in Table 18. Ten percent of the natural wetlands are directly adjacent to land used for intensive agriculture and over 30% are in areas of high or very high salinity hazard. Sixty five percent of the wetlands characterised as being of high ecological importance are under high or moderate threat (Eco Logical Australia, 2008). 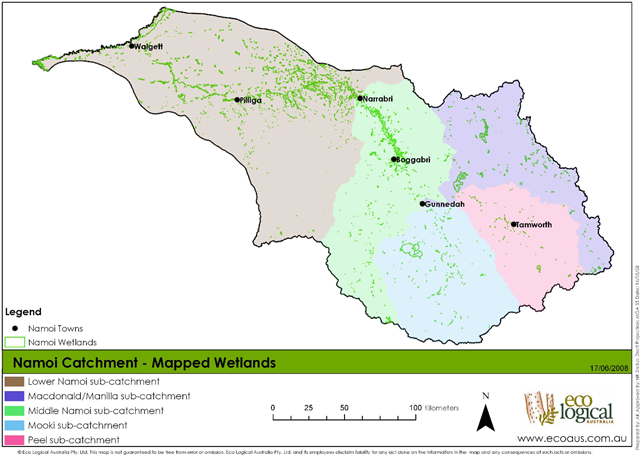 Source: Figure 2 in Eco Logical Australia (2008). This figure is not covered by a Creative Commons Attribution licence. It has been reproduced with permission from Namoi Catchment Management Authority.

Lake Goran is a large internal drainage basin south of Gunnedah, covering more than 60 km2. While ephemeral in nature in recent years diversion of local creeks associated with agricultural and structural works has meant that the deepest parts of the lake have resulted in more frequent inundation regimes. During dry periods the lakebed is intensively cropped but when flooded the lake provides extensive habitat for large numbers of water birds, and thus is listed as a wetland of national significance (Green et al., 2011).

Gulligal Lagoon near Gunnedah is a semi permanent wetland that is connected to the Namoi River and is filled during flooding events and from river surface flows. The lagoon is a 4.2 km long channel that is dominated by river red gum (Eucalyptus camaldulensis) woodlands and is known to provide important habitat for native fish species including the olive perchlet and purple spotted gudgeon. As the lagoon was restocked with breeding pairs of the purple spotted gudgeon in 2009, fish monitoring since then provides important baseline data on trends in populations (Commonwealth Environmental Water Office, 2012).

The reach of the Namoi River between Boggabri and Narrabri is characterised by a number of long, narrow lagoons that represent prior channels of the Namoi River. Barbers Lagoon, a major anabranch of this reach, covers approximately 134 ha and is about 22 km long (Commonwealth Environmental Water Office, 2012).

Groundwater-dependent ecosystems include floodplains, wetlands, riparian areas and springs. These ecosystems provide important environmental services including potable water, habitat for fish, invertebrates and aquatic and terrestrial flora and fauna. They can also play an important role in the removal of wastes and containments or provide important cultural and aesthetic values (Tomlinson and Boulton, 2008). However knowledge of the process that regulates function in groundwater-dependent systems has lagged behind that of ecosystems dependent on surface water. There has been a concerted effort to address these knowledge gaps and there is now improved understanding of many aspects of the function and distribution of groundwater-dependent ecosystems (see, for example, the GDE Atlas (BOM, 2013)). Despite this several important knowledge gaps with respect to GDE function remain.

Eamus et al. (2006) simplify this list into three groups that cover each of the communities described above:

There are a number of groundwater-dependent ecosystems that occur in the Namoi area. However, there are significant knowledge gaps in relation to the location, condition and water requirements of these GDEs. The 2010 NSW state of the catchment report for groundwater in the Namoi region maps the occurrence of high priority GDEs within the river basin, but these refer mainly to springs (Figure 50). Terrestrial communities dependent on springs are not considered. However, the GDE Atlas www.bom.gov.au/water/groundwater/gde/map.shtml identifies a number of ecosystems that have high potential for reliance on groundwater associated with rivers, springs and wetlands and terrestrial ecosystems with moderate to high potential for reliance on subsurface groundwater resources, for example forests and woodlands associated with the Pilliga outwash. Furthermore, floodplain communities such as the river red gum black box forests have been intensively studied in other parts of Australia and have been demonstrated to exhibit groundwater dependency (Akeroyd et al., 1998; Doody et al., 2009; Holland et al., 2006; O'Grady et al., 2009; Thorburn et al., 1994).

Extensive mapping of GDES has been attempted by SKM 2010 using the Sebal algorithm (Bastiaanssen et al., 1998). Sebal uses a surface energy balance approach to estimate evapotranspiration using remotely sensed data, and that can be used to identify areas in the an image where evapotranspiration exceeds rainfall, and this index is used as an indicator of groundwater use. Using these procedures (SKM, 2010) identified a total of 118,688 ha of the catchment were identified as being highly likely to be dependent on groundwater, including terrestrial vegetation and extensive areas within the Pilliga nature reserve, riparian vegetation and wetlands (Figure 50). 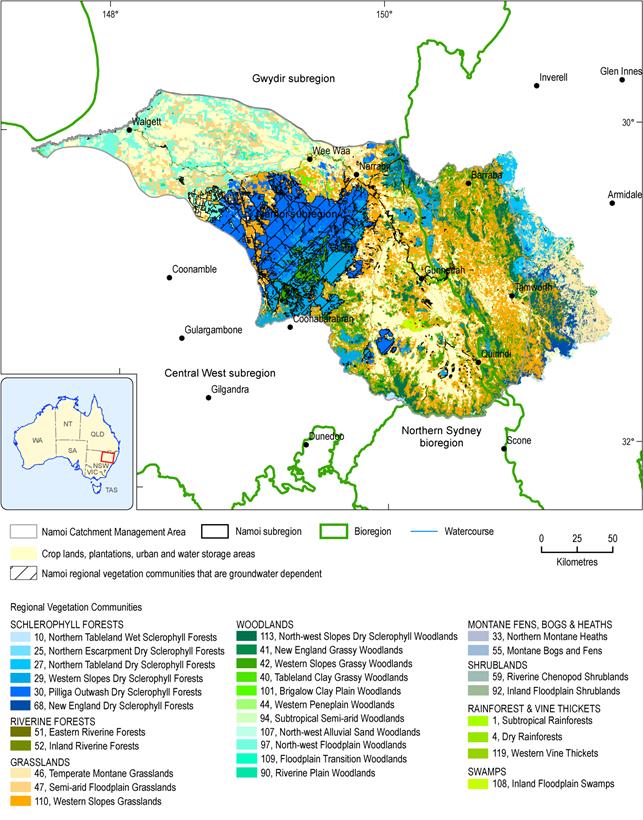