Assessments of surface water – groundwater connectivity were undertaken as part of the Murray-Darling Basin Sustainable Yields Project (Parsons et al., 2008). The connectivity mapping was a snapshot in time of fluxes to or from the major rivers in the Namoi river basin. The assessment used data from June 2006, a time that represented a historically low flow period in the Namoi River (CSIRO, 2007). Results of the connectivity mapping are shown in Figure 47 and include the Peel catchment to the east of the Hunter-Mooki Fault System, outside the Namoi subregion. The creeks and rivers reaches in the highland areas of the Peel and Manilla rivers are predominantly gaining. The river changes from gaining to losing and back to gaining in the upper to mid Namoi reaches, including the Mooki River and Coxs Creek. The lower reaches of the Namoi River form a losing system and Pian Creek are classified by CSIRO (2007) as maximum losing (i.e. the water table is separated from the stream by an unsaturated zone. The stream itself is classified as a medium losing stream based on flux). This result is generally consistent with previous hydrogeological interpretations of the region (Ivkovic, 2006). 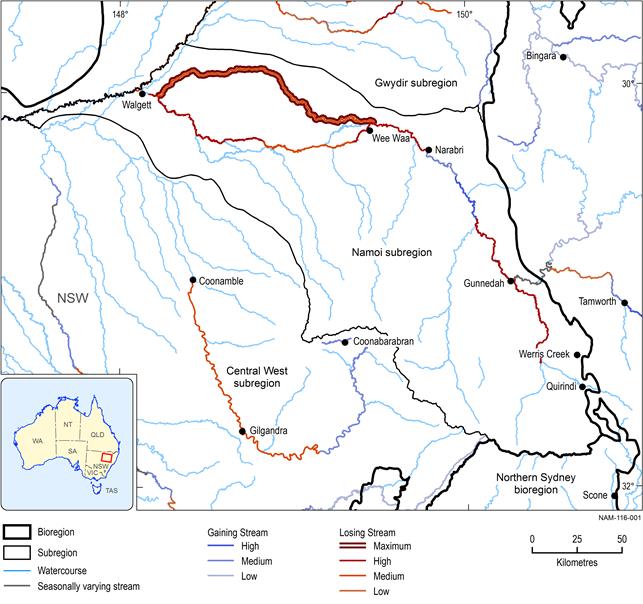 Lamontagne et al. (2011) investigated surface water and groundwater connectivity at two locations along the Namoi River downstream of Narrabri, as part of the Interconnection of Surface and Groundwater Systems – River Losses from Losing/Disconnected Stream project (Brownbill et al., 2011). The project aimed to determine whether losing-connected or losing-disconnected conditions were present at two locations (Old Mollee and Yarral East), using a range of techniques including a piezometer transect, the hydraulic conductivity and infiltration rates of the streambed, and groundwater chemistry. The Namoi River at Old Mollee and Yarral East was losing-connected at the time of sampling (16-20 November 2009). Lamontagne et al. (2011) concluded that this section of the river is unlikely to become losing-disconnected due to the absence of a clogging layer in the streambed. Instead, a decline in the watertable would result in an increase in the infiltration rate, resulting in the river eventually drying out rather than becoming disconnected. The groundwater chemistry results indicated that groundwater recharge occurs during floods and under low flow conditions (Lamontagne et al., 2011).

There have been numerous other studies into surface water – groundwater connectivity in Maules Creek and the Namoi River between Boggabri and Narrabri using a combination of geological data, geophysical methods, hydraulic data, and groundwater salinity, temperature and water chemistry data (Barrett, 2010). The results indicate that there is significant connectivity between surface water and groundwater in these areas that varies both spatially and temporally (Andersen and Acworth, 2007; Andersen and Acworth, 2009; Andersen et al., 2010; Rau et al., 2010; Giambastiani et al., 2012; McCallum et al., 2013).

As a result of this surface water – groundwater connectivity, historical groundwater use has impacted, and will continue to impact, on streamflow in the tributaries of the Namoi River. The lower Namoi River has changed from a substantial gaining river prior to development to a largely losing river. CSIRO (2007) estimated that the total average impact on tributary streamflow by 2010 would be a loss to groundwater of 19 GL/year more than that included in the current river planning models. The current level of groundwater extraction is expected to eventually reduce average streamflow by an additional 36 GL/year to reach the total 99 GL/year impact (CSIRO, 2007).

It is highly likely that water in the Pilliga Sandstone aquifer is providing baseflow to the Namoi River at the eastern extent of the outcropping Great Artesian Basin (GAB) units. These baseflows are fed by ‘rejected recharge’, which occurs where water is restricted from entering the aquifer, mainly due to geology, and as a result discharges at the surface (Department of Water and Energy, 2009). The river model of the Lower Namoi used in groundwater management plans has an average inflow of 8.3 GL/year from the GAB (Herczeg, 2008).

For the purpose of water sharing plans in New South Wales, a highly connected system is defined as a system in which 70% or more of the groundwater extraction volume is derived from streamflow within a single irrigation season. All other systems are considered ‘less highly connected’ (NSW Office of Water, 2012). According to this definition, shallow aquifers that are highly connected to the river system are common in the Peel and Upper Namoi and as a result, groundwater levels are highly dependent on surface water flows (Green et al., 2011). The groundwater areas covered by the New South Wales GAB shallow groundwater sources water sharing plan are considered to have a relatively low connection to the surface waters in the same areas (NSW Office of Water, 2011). There is no specification for areas where the GAB sediments outcrop beneath the Namoi River.