The climate across the Namoi subregion varies from cooler and wetter in the east to hotter and drier in the west. Figure 9 shows the Köppen Key Climate Groups for the region, showing temperate areas in the east and south, moving to subtropical areas west of Narrabri. The subtropical zone extends south-east along the main Namoi River channel to Gunnedah. 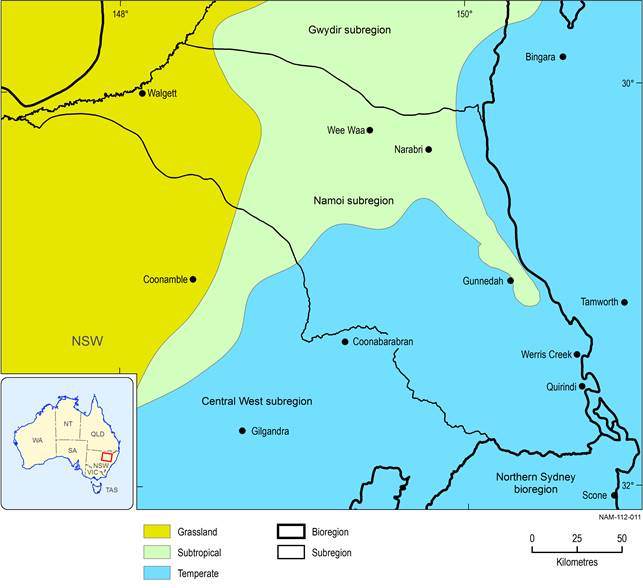 Mean annual rainfall varies significantly across the region from less than 495 mm/year in the west to over 1100 mm/year in the highlands to the east and south (Figure 10). Mean monthly rainfall and temperature patterns are shown in Figure 11 for Narrabri (climate station 54120) (Bureau of Meteorology, 2013a). The lowest average rainfall typically occurs in April and August (April and May for Tamworth). Most rainfall typically occurs in the summer months (December to February). Widespread drought has occurred in the past, lasting for several years in the Namoi river basin, and severe water shortage typically occurs in the subregion from May to December each year. Flooding also occurs quite frequently and is recorded in the Emergency Management Australia Disasters Database for 1998, 2000 and 2004 (Hyder Consulting, 2009). 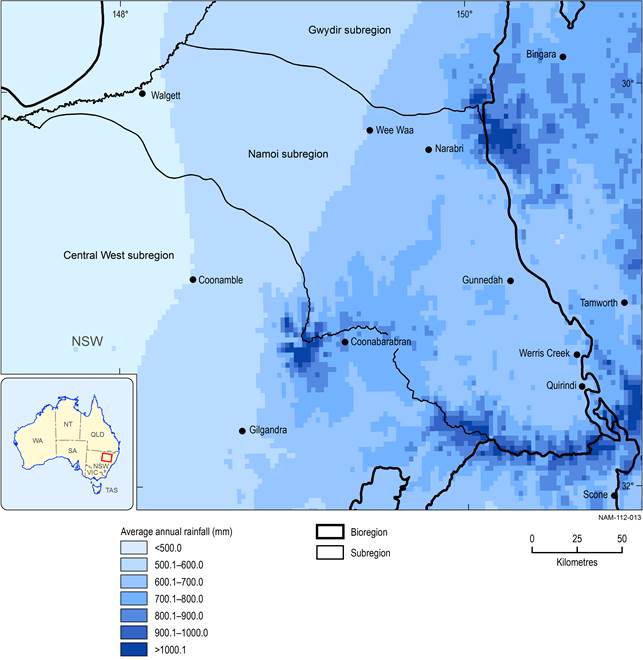 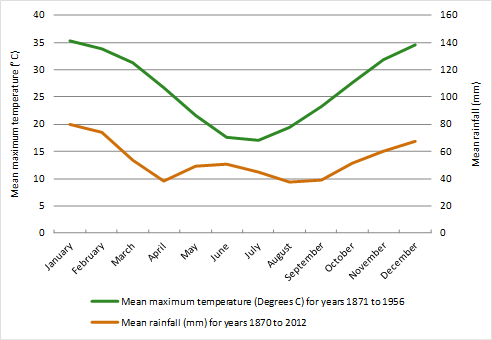 Table 5 provides a summary of climate statistics for a selection of climate stations located across the subregion (Figure 12). The climate stations are listed according to position in the region, moving east to west, showing changing climate characteristics across the region. Bucking the trend of decreasing rainfall with distance westward, the average annual rainfall at Gunnedah is lower than that recorded at Narrabri and Baradine. This effect may be due to the orographic effects of the higher terrain adjacent to the two latter sites. 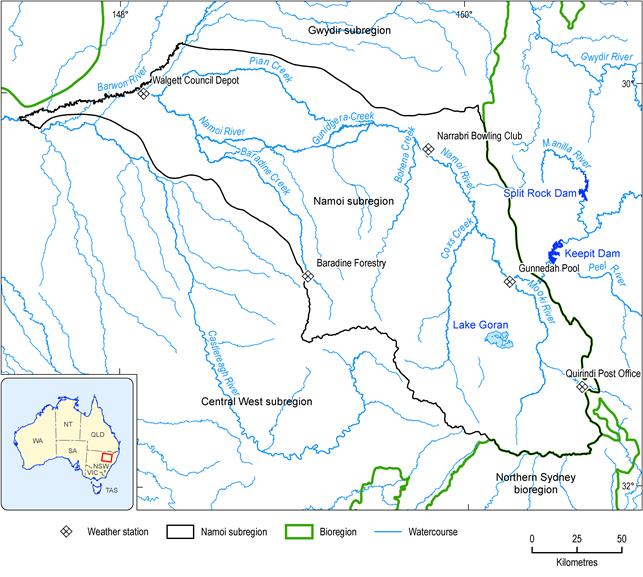 Within the subregion, mean annual potential evapotranspiration is lowest along the south-western boundary to Walgett (less than 1300 mm/year), and rises to approximately 1400 mm/year near Narrabri, with values increasing from south-west to north-east (Figure 13). In contrast, mean annual actual evaporation has a strong gradient, increasing from west to east. 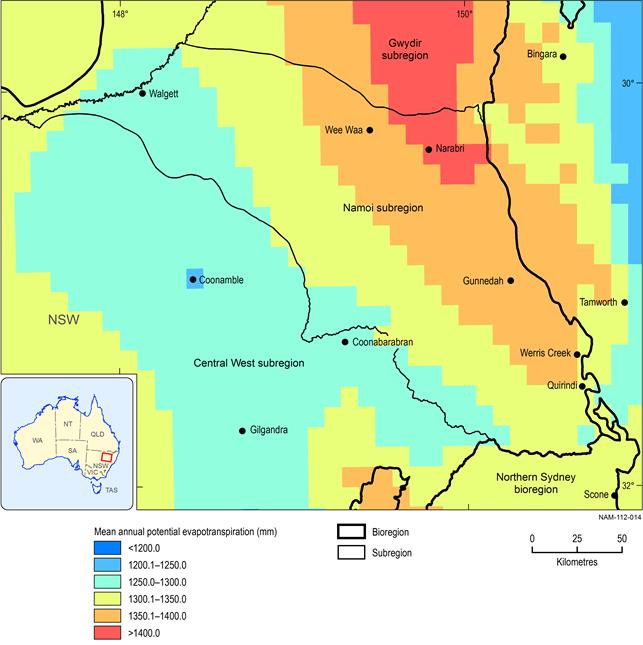 In a recent report by the South Eastern Australian Climate Initiative (SEACI) (CSIRO, 2010), the significance of the period between 1997 to 2009, which is the driest 13 year period on record in south-eastern Australia, was assessed relative to other recorded droughts since 1900 as an indicator of what the future climate might look like. While this period is the driest in the 110+ year record in the south-eastern corner of Australia, with rainfalls 5 to 30% less than the 1895 to 2008 average, in the Namoi subregion, the rainfall was either within 5% of, or 5 to 20% greater than the long-term average. Modelled streamflow was estimated to be 5 to 50% greater than the long-term average across much of the subregion, with only the most westerly areas experiencing runoff reductions. In general, analysis has shown that the impact on streamflow of a small percentage change in rainfall is enhanced, with a 5% reduction in average rainfall leading to a 10 to 15% reduction in streamflow, and a 5% increase in rainfall leading to a 10 to 15% increase in streamflow in south-eastern Australia (Chiew, 2006).

However, climate change modelling, which attempts to predict future climates in response to global warming, suggests that the probability of runoff reductions occurring in the Namoi area is greater than 50%. Post et al. (2012) modelled future runoff at a 5 km grid resolution for the Murray–Darling Basin. Their climate series was informed by simulations from 15 global climate models used in the IPCC Fourth Assessment Report, taking into account changes in daily rainfall distributions and seasonal rainfall (and potential evapotranspiration) amounts for an increase in global average surface air temperature of 1.0 °C (2030 relative to 1990). In the northern Murray–­Darling Basin, there was significant variability between models, with future streamflow projected to be between -29% and +12% of current averages, with a median of -10%. In the Namoi river basin (subregion plus headwaters), the median projection was a 1% reduction (–6 mm) in mean annual rainfall with small increases in summer rainfall, but reductions in autumn, winter and particularly spring rainfall. Across all models, potential evaporation was projected to increase by 2 to 5%. The net result is a projected 7% reduction (–2 mm) in mean annual runoff. At the dry end of the forecast ensemble, runoff could be 27% lower (–8 mm) than the current average, while at the wetter end, increases of 10% (+3 mm) of current runoff were predicted. Figure 14 shows the distribution of rainfall and runoff changes across the year for the historical record and projected changes for Tamworth. The wider range of projections for runoff compared to rainfall indicate greater uncertainty in these projections, and within the runoff projections, the summer and winter runoff projections are more uncertain than those for autumn and spring.

Climate change projections were also developed for the CSIRO Murray-Darling Basin Sustainable Yields project and reported for the Namoi surface water catchment in CSIRO (2007). Three global warming scenarios were analysed in 15 global climate models (GCM) to provide a spectrum of 45 climate variants for the year 2030. The methods used to develop the climate variants are described in detail in Chiew et al. (2008). The analysis provided modelled estimates of changes in climate variables for high, medium and low global warming scenarios relative to the climate in 1990. The method also took into account different changes in each of the four seasons as well as changes in daily rainfall distribution. All 45 future climate variants were used in the rainfall-runoff modelling undertaken in the study; however, three variants – a ‘dry’, a ‘mid’ (best estimate – median) and a ‘wet’ variant – were presented in more detail.

The impacts of the different climate scenarios on surface water flows are summarised in CSIRO (2007), which suggests that, under the best estimate 2030 climate, the hydrology of the billabongs and wetlands of the Namoi River would not change greatly from the conditions in 2007. However, under the ‘dry extreme’ scenario for 2030 there would be a 36% increase in the average period between flood events, although flooding volumes would reduce by 28%. The changes would lead to a considerable change in connectivity between the river, billabongs and wetlands causing an alteration in nutrient transfer processes that would affect resident aquatic fauna in the area. A wet-extreme scenario for 2030 would see a return to pre-development values of average and maximum periods between events and the average event would increase to greater than pre-development volumes. The report stated that this would cause annual flooding to exceed pre-development volumes.

Namoi CMA (2012a) has identified potential climate change impacts on landscape assets, summarised in Table 6. Potential impacts include a decrease in land cover, leading to a reduction in rooting density and depth, and increased soil erosion caused by prolonged, extreme dry periods with more intense rainfall events and storms. As summarised by the Namoi Catchment Action Plan (CMA, 2012a) land degradation caused by increased wind erosion, drying soils and heavy summer rainfall could be compounded by seasonal ‘hyperwetting [of] soils’ (Namoi CMA, 2012a p. 254). A diminished rootzone and increased soil wetness during the summer is projected to increase recharge of groundwater aquifers, leading to groundwater table rises and a greater risk of dryland salinity outbreaks. A drier, warmer climate means an enhanced evapotranspiration potential and reduced surface water availability, which is likely to increase the demand on groundwater, already stressed by a reduction in recharge.