The Namoi subregion lies within the Namoi river basin. The Namoi river basin is based around the Namoi, Peel and Manilla rivers. It is bounded by the Great Dividing Range in the east, the Liverpool and Warrumbungle ranges in the south and the Nandewar Range and Mount Kaputar in the north.

The main surface water resource of the Namoi subregion is the Namoi River. The average annual rainfall in the Namoi river basin varies from more than 1100 mm/year east of the subregion to about 600 mm/year near Gunnedah to less than 500 mm/year west of Walgett. The average Class A pan evaporation increases from less than 1200 mm/year east of Tamworth, to about 1600 mm/year near Gunnedah, and about 2100 mm/year west of Walgett. There are three large dams and a few small dams that supply water to agricultural, domestic and municipal users in the Namoi river basin. The major tributaries of the Namoi River are the Peel River, Manilla River, McDonalds River, Mooki River, Coxs Creek, Pian Creek (anabranch), Gunidgera Creek (anabranch), Bohena Creek and Baradine Creek. Lake Goran is the largest inland surface water body in the subregion. It is shallow and occupies up to 82 km2 when full, but evaporates completely during dry periods.

There are approximately 68 streamflow gauging stations with continuous flow measurements in the Namoi river basin. The average annual flow in the Namoi River at Gunnedah between 1900 and 2011 was 669 GL. Two of the largest annual flows, 3305 and 3871 GL, were experienced in 1955 and 1956 respectively. The 1956 flood also resulted in the largest inundation area in the basin.

An example surface water balance for the Namoi river basin shows that only about 6% of the total inflow was used under general licence in 2011–12 (Figure 35). However, the average diversion for years from 2005–06 to 2011–12 was 21.8%. The ten-year Water Sharing Plan imposes long-term annual extraction limits on surface water resources from major tributaries in the Namoi river basin, ensuring that approximately 73% of long-term yearly flows are protected for environmental health. The sustainable diversion limit under the Murray–Darling Basin Plan requires that the long-term average surface water diversion limit be reduced from the current water sharing plan limits of 508 GL/year (Namoi SDL resource unit baseline diversion limit includes the Peel river basin water sharing plan). This will be reduced by 10 GL/year to meet local environmental targets set by the Basin Plan (for more details see Section 1.1.5.2.

The water quality of the Namoi River and its tributaries is generally acceptable for irrigation and other farming activities. However, the water quantity and quality along with physical conditions of rivers and creeks of the Namoi subregion have been affected by anthropogenic activities. Lack of flow data for lower order streams and limitation of water quality modelling for many mining by-products are significant knowledge and data gaps. 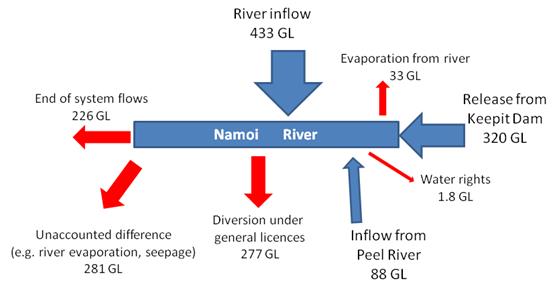