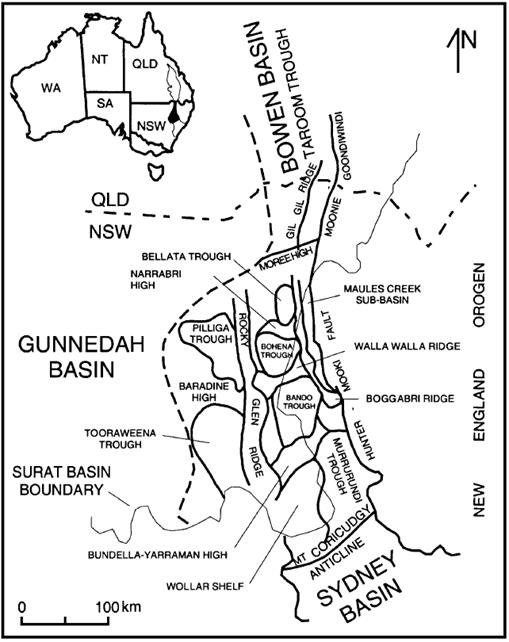 Figure 18 Subdivisions of the Gunnedah Basin

The subdivisions were initially proposed in Tadros (1988). The major Mullaley Sub-basin is subdivided here into the Bellata, Bohena and Bando troughs. Subsequent exploration has highlighted issues with these subdivisions. The Walla Walla Ridge (WWR) and Narrabri High (NH) are possibly not quite such significant internal structures as initially proposed (UPCS, 2000). The Pillaga Trough has no Gunnedah Basin fill and the western boundary of the basin has been revised eastwards.

Source: Figure 1 in Othman and Ward (2002). This figure is not covered by a Creative Commons Attribution licence. It has been reproduced with permission from Elsevier.

The most prominent geological structure in the Namoi river basin is the Mooki Thrust (Figure 18), a constituent of the Hunter-Mooki Thrust System which forms the eastern boundary of the Bowen–Gunnedah–Sydney Basin system (Collins, 1991). These major faults are conceptualised as having been hard-linked to the westward propagating retroforeland thrust belt of the New England Orogen to the east (Korsch et al., 1997; Korsch, 2004). No evidence has been found to demonstrate that these faults are reactivated normal faults, in contrast to structures further west (Korsch and Totterdell, 2009a).

Gravity data reveals north-south oriented troughs and ridges in the Gunnedah Basin which have been cited as evidence for folding in front of the Hunter-Mooki Thrust System. However, it is possible that these large-scale troughs represent the Lower Permian topographic experession of initial rifting of the Gunnedah Basin (Korsch and Totterdell, 2009b). Anticlinal structures in the Gunnedah Basin related to episodic inversion of the basin throughout the Permian and into the Lower Triassic have been documented from seismic evidence. To some extent fault reactivation has also continued into the Cenozoic with Surat Basin sedimentary rocks being folded and faulted, although penetration by reactivated faults is not extensive (Korsch and Totterdell, 2009a).

Recent work has overlooked transpression as being the driving mechanism for the Cenozoic structures (Korsch et al., 2009b). Anticlines within the Permian Gunnedah Basin sequence are mostly oriented northeast-southwest. These may be intersected by minor normal faults with displacements locally exceeding 150 m, which strike perpendicular to anticlinal hinges. These orientations provide evidence for the former existence of a transpressional tectonic system postdating the Triassic (Stewart and Alder, 1995).

Information on the location and characteristics of faults that structurally disrupt the Gunnedah Basin rock strata in the Namoi subregion is available from several sources. Existing state-wide geology maps indicate that a sub-parallel network of north-west oriented faults occur in the southern part of the subregion. The OZSEEBASE dataset (FrogTech, 2006; FrogTech, 2013) currently provides the most comprehensive interpretation of structures in the Namoi subregion and shows a complex network of sub-parallel and cross-cutting faults, particularly in the eastern half where the rocks of the Gunnedah Basin occur at or close to the surface (Figure 19, Figure 20). The most intense faulting occurs in a zone adjacent to the Hunter-Mooki Thrust Fault, which is a major basement structure that coincides with the eastern boundary of the subregion. Many of these faults have distinct sub-linear surface expressions that run parallel with the dominant north-north-west structural trend. Deeper faults further west of this zone are interpreted based on geophysical data (magnetics and gravity), as there is scant outcrop of the Gunnedah Basin rocks in the region due to extensive cover of younger sedimentary strata, such as those of the overlying Surat Basin. The most common fault types in the Namoi subregion are thrust faults (36%), transfer faults (20%), and strike-slip faults with dominantly sinistral movement (20%). 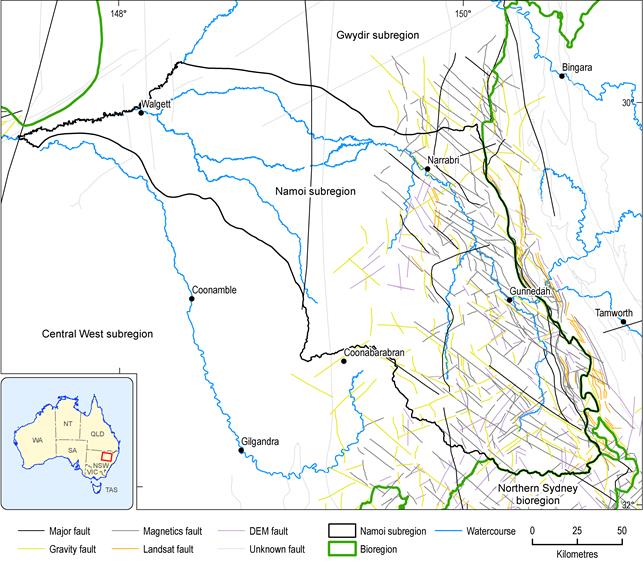 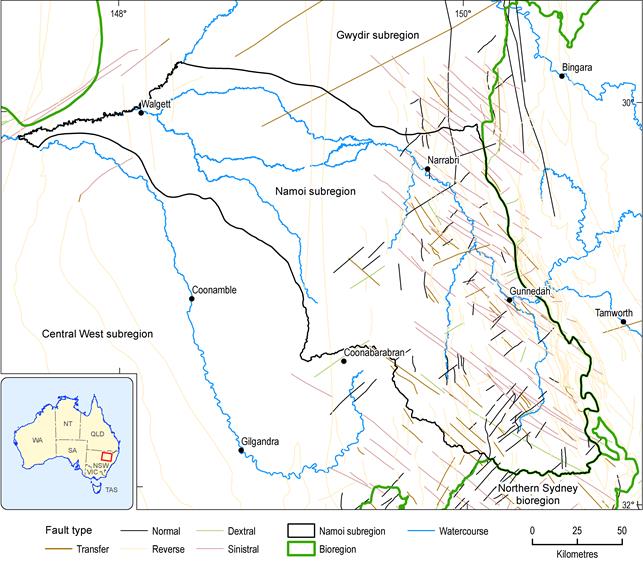 During the 1990s, Hillis et al. (1999) (and references therein) compiled an extensive, Australia-wide database of in situ stress measurements. The measurements were obtained from sites across Australia, including areas of the Bowen and Sydney basins. No data are available for the Gunnedah Basin specifically, but maximum stress directions for the nearby Sydney Basin are mainly oriented north-northeast, north-east, and east-west. Compared to the Bowen Basin, stress directions in the Sydney Basin are more varied, suggesting that local features, such as density contrasts and structures, significantly influence stress orientations. This is particularly true for the Hunter Coalfield of the Sydney Basin, just south of the Gunnedah Basin, where stress orientations are bimodal (Hillis et al., 1999).

The Geoscience Australia earthquake database indicates that there has been no significant neotectonic activity in the region of the Namoi river basin. No earthquakes exceeding 1.5 magnitude have been recorded in the database for the area.