The subregion is bounded by the natural catchment boundaries of the main rivers within it, thus there is no noticeable surface water inflow to the subregion, with the exception of inflow from the headwaters of the Macintyre River. The long-term mean annual rainfall and potential evapotranspiration across the Maranoa-Balonne-Condamine subregion are 580 mm and 2145 mm, respectively (Welsh et al, 2014) indicating a large annual water deficit. The long-term mean annual rainfall and modelled runoff of the Condamine-Balonne river basin are 514 mm and 19 mm, respectively (runoff ratio 3.7%, Scenario A) (CSIRO, 2008).

The long-term average natural surface water flows estimated using the water balance techniques of Budyko (1974), as described in McVicar et al. (2015), are visualised in Figure 14. It shows that streamflow in the Barwon, Dawson and Burnett rivers is much greater than in their individual tributaries, thus potentially providing greater dilution effects than their tributaries once the impact of CSG and coal mining development reach these rivers.

The Budyko estimate of mean annual flow for the Condamine-Culgoa River system at the Maranoa-Balonne-Condamine subregion boundary is 2540 GL (30 mm) for the period 1982–2010 (Figure 14), which is larger than the long term modelled runoff. The mismatch between the Budyko and rainfall-runoff analyses can be partially explained by the losses due to consumptive use, which are accounted for in the rainfall-runoff modelling but not in the Budyko analysis. The difference in calculation period used in the long term modelling and Budyko analysis may also explain the discrepancy. This suggests that over 60% of runoff does not reach the catchment outlet due to losses or consumptive use. A preliminary determination of observed flow based on published data (DNRM, n.d.) at a comparable site (422205A Balonne – Minor River at Hastings) shows an average annual runoff of 9.2 mm (range 0.5 to 60 mm) for the same period, which is lower than both the modelled flow and flow from the Budyko analysis.

Dilution, evaporation, seepage, chemical transformation or a combination of these make it difficult to predict how far the impact of any effluent water could travel along the watercourse. Influential factors include quality and quantity of the release (or spill), existing flow in the receiving waters and prevailing weather conditions. 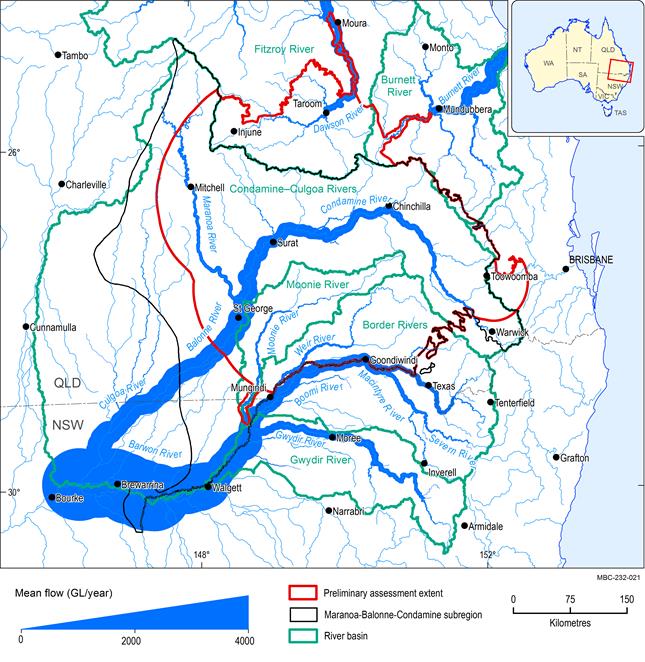 Long-term natural annual flow is estimated using the water balance technique of Budyko (1974), as described by McVicar et al. (2015). This technique does not take into account human impoundments (dams / weirs) or diversion from rivers. It models long-term natural stream flow from a hydroclimatic perspective.

Groundwater recharge generally occurs along outcrop regions to the north and east along the Great Dividing Range, predominately via direct rainfall infiltration into outcrop or indirect leakage from streams or overlying units (QWC, 2012). Direct rainfall or diffuse recharge rates are generally low (less than 2.5 mm/year). However, they can be up to 30 mm/year during high intensity rainfall and localised recharge from stream or aquifer leakage (Kellett et al., 2003). Recharge rates are shown in ‘mm/year’ in Figure 15. Modelled long-term average net recharge values are estimated in steady-state model calibration by allowing recharge rates to vary between 1 and 30 mm/year, except in the Main Range Volcanics aquifers, which are allowed to vary between 20 and 30 mm/year (as described in Table 3 in Section 2.6.2.4 of companion product 2.6.2 for the Maranoa-Balonne-Condamine subregion (groundwater numerical modeling; Janardhanan et al., 2016)). 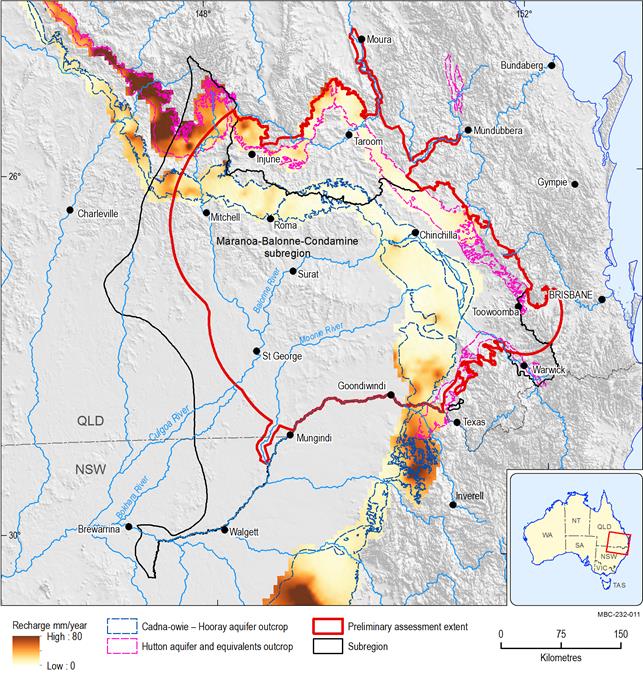 Water outputs from the Surat Basin include 126.5 GL/year bore abstractions, small spring discharges (~0.2 GL/year), losses via evapotranspiration (56 GL/year), diffuse upward leakage (93 GL/year) and limited groundwater throughflow to the Eromanga Basin. The drop in aquifer pressure resulting from the decline in storage is not uniform across the Surat Basin. Pressure drops in the Gubberamunda Sandstone aquifer are very high in the south-west of the Surat Basin, exceeding 100 m in the area between St George and Cunnamulla where groundwater usage is highest (Ransley and Smerdon, 2012).

Ransley and Smerdon (2012) surmised that potential impacts of coal seam gas production in the intake beds of the northern Surat Basin are as yet not fully understood. Their synopsis was that, although the target formation for gas and water production is the Walloon Coal Measures, leakage is likely generated in the Springbok Sandstone, Hutton Sandstone and Gubberamunda Sandstone aquifers. The magnitude of induced drawdown depends on the degree of hydraulic connection between the Walloon Coal Measures and these sandstone aquifers (Ransley and Smerdon, 2012). 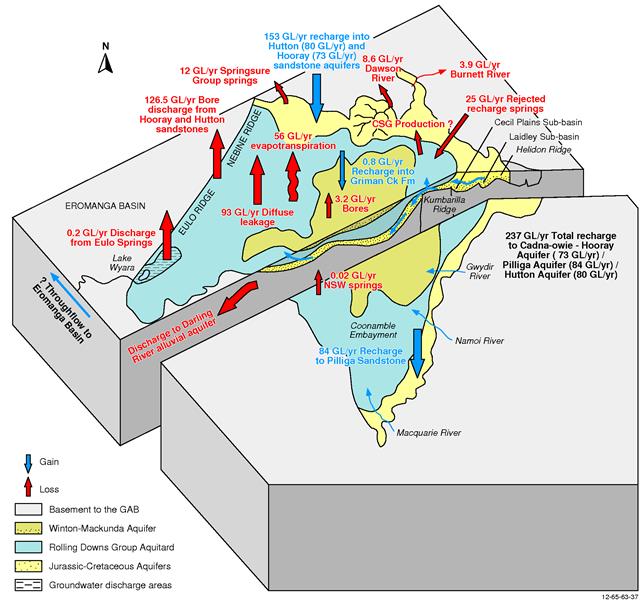 Figure 16 Hydrogeological framework and groundwater balance of the Surat Basin

As indicated in Welsh et al. (2014), recharge to the Condamine River alluvium is via rainfall infiltration throughout the Condamine river basin, flood recharge in the lower areas, lateral flow from adjacent upstream aquifers and upward leakage from the basalts of the Main Range Volcanics (CSIRO, 2008). Non-flood streambed leakage from the Condamine River is considered to be the largest source of recharge to the alluvium (Huxley, 1982), with additional contributions from irrigation water via deep drainage.

A subsequent Queensland Department of Environment and Resource Management (DERM) water-balance study considered Condamine River streambed recharge estimates, concluding that the most likely values are those calculated by Lane (1979) who reported stream loss values ranging from 38.5 to 115 ML/year/km (KCB, 2010).