The purpose of this section is to collate and summarise the connections in the hydrological cycle of the Maranoa-Balonne-Condamine subregion (see companion product 1.1 for the Maranoa-Balonne-Condamine subregion (Welsh et al., 2014)), and to describe how these hydrological connections may be affected by coal mining and CSG development.

The spatial extent of the water flows and pathways is limited to the subregion PAE as defined in companion product 1.3 for the Maranoa-Balonne-Condamine subregion (Mitchell et al., 2015) (Figure 6). The PAE extends beyond the northern and eastern subregion boundaries to include areas of the Hutton, Clematis and Precipice sandstone aquifers and shallower aquifers that may be affected by CSG-related groundwater extraction within the subregion and 5 to 7 km from the Dawson, Moonie and Weir rivers outside of the subregion boundary to encompass potential downstream surface water impacts. This covers a surface area of about 130,300 km2 and is underlain by the geological Surat Basin. 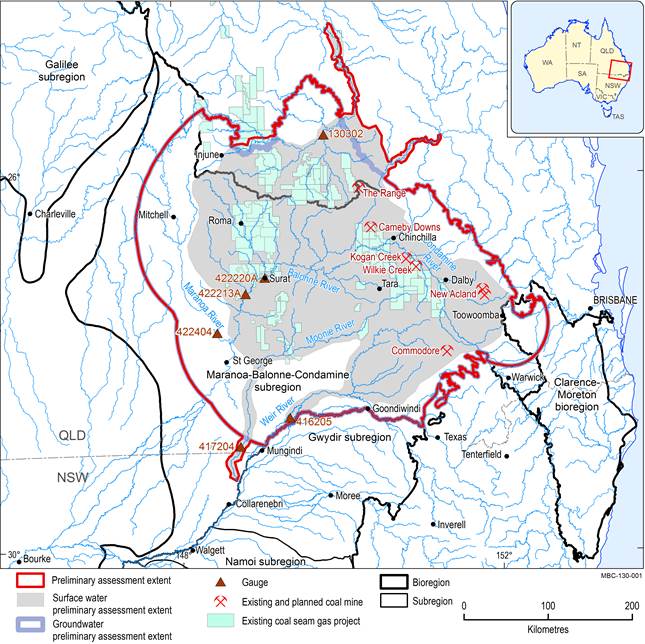 Groundwater flows in the alluvial groundwater systems, with the exception of the Condamine Alluvium, are generally topographically driven. Areas of potential inter-formational flow from alluvial aquifers into GAB units exist across parts of the subregion, where water levels in the alluvium are higher than in the underlying units of the GAB. Groundwater flow in intake beds (Kellett et al., 2003) and in the upper units of the GAB is to the south and south-west. Most surface watercourses in the Maranoa-Balonne-Condamine PAE are temporary and are likely to be losing-disconnected with respect to groundwater flows for most of the year. An exception is the Dawson River in the northern part of the PAE, which receives groundwater flow from the surrounding GAB intake beds (mainly Hutton Sandstone). These groundwater inflows sustain almost continuous flow throughout the year.

CSG operations reduce groundwater levels in the Walloon Coal Measures through water extraction during exploration and production to allow gas to flow and be collected in CSG wells. Hydrological changes to the target aquifer can propagate through connected aquifers to indirectly affect surface water – groundwater interactions in the aquifer outcrop and subcrop areas in the PAE. This has the potential to reduce groundwater levels affecting water-dependent assets, including groundwater-dependent vegetation, watercourse springs, spring complexes and economic bores. There may also be the possibility that a leaky well permits the transfer of water between layers and to the surface. For open-cut mining operations, local mine site dewatering is required so that coal can be mined and the mine is not flooded by incoming groundwater flows. This will induce water to flow toward the pit locally, and again will affect groundwater levels. In such cases, increased hydraulic gradients away from the surface watercourse could decrease baseflow contributions to the stream or increase the rate of infiltration from the stream bed. The management of extracted water from coal mining and CSG development (described in Section 2.3.4) may reduce or increase water flows in surface water and groundwater flow systems, potentially affecting water quality and flows.