Alluvial systems play an important role for the agriculture and ecologically significant areas in the subregion. From a whole-of-catchment perspective, alluvial depositional and aquifer systems follow a generalised pattern identified as ‘Upper’, ‘Mid’ and ‘Lower’ catchment alluvial development (Figure 10). The landscape classification described in Section 2.3.3 classifies catchments as either ‘upland’ or ‘lowland’, where ‘upland’ refers to the upper catchment and ‘lowland’ refers to the mid and lower parts of a catchment. 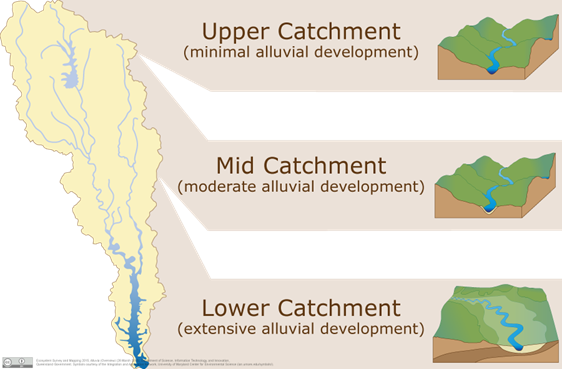 Alluvial sediments in the topographically higher upper catchment (upland) are relatively thin (typically less than 15 m thick) and are composed mostly of unconsolidated coarse-grained sediments such as boulders, gravel and sand (DEHP, 2013). The upper Condamine tributaries draining from the basaltic Toowoomba Plateau produce highly-weathered bedrock-derived soils. The tributaries coming from the Taroom Hills to the north result in sandstone-derived sediments. Due to the coarse-grained nature of the alluvial sediments of the upper catchment, groundwater is stored and transmitted rapidly through intergranular voids between boulders, gravel and sand. In the subregion, drainage from fractured rocks of the Main Range Volcanics may result in springs feeding the tributaries of the alluvial streams. Groundwater quality in areas associated with the tributaries of the Main Range Volcanics tends to be of low salinity and is magnesium bicarbonate dominated (Welsh et al., 2014).

Alluvial aquifers in the mid and lower catchment tend to be significantly wider and deeper than those in the upper catchment, reaching up to 150 m thickness in the Condamine Alluvium near Dalby (Welsh et al, 2014). Typically, the alluvial sediments in the lower catchment are fining-upward sequences of unconsolidated and, less commonly, semi-consolidated sediments. Within these alluvial sequences, gravel- and sand-rich layers occur near the base, overlain by thick deposits of finer floodplain silts and clays which have been deposited in a low-energy floodplain environment. Groundwater in the lower Condamine Alluvium shows increased salinity, when compared to the magnesium bicarbonate-dominated upstream areas, with records from 3,000 to 14,000 mg/L total dissolved solids (TDS) (Welsh et al, 2014). The alluvial aquifers of the Maranoa-Balonne-Condamine subregion are represented by the ‘Cenozoic aquifers and aquitards’ shown in Figure 9 .

Average alluvial aquifer thickness is in the order of 20 to 30 m for the Condamine river basin. The Border Rivers river basin straddles the New South Wales – Queensland border. The Queensland Border Rivers Alluvium groundwater management area relates to the alluvial sediments associated with the Dumaresq River, which are confined to a paleochannel that extends from Mingoola to Keetah. These 'alluvial sediments are generally greater than 30 metres below surface and are up to 50 metres thick and do not outcrop’ (DRNM, 2015). In Queensland, these alluvial sediments are not formally recognised stratigraphic units, although they may be considered stratigraphically equivalent to the Gunnedah and Narrabri formations, which occur further to the south. In New South Wales, alluvial aquifer thicknesses can be up to 70 m for the Gunnedah Formation, separated by a semi-permeable layer of 2 to 15 m from the Narrabri Formation, which ranges in thickness from 10 to 30 m (CSIRO, 2007). Aquifer thickness in the Maranoa-Balonne river basin can exceed 180 m (Exon, 1976). Little information is available for the Moonie river basin aquifers; they are possibly up to 100 m thick, but are regularly accessed with bores screened between 10 to 35 m depth for stock and domestic use (CSIRO, 2008).