Loy Yang Power (1997) outlined a 40 year plan for Loy Yang A Power Station (until 2037) and a 30 year plan for Loy Yang B Power Station. The whole life potential mine development extent from 1996 is shown in Figure 13, described in the figure as future mining blocks. The potential mine development allowed for increased power station coal demands to extend power station life and coal supply to other industries (Loy Yang Power, 1997).

In 1996 it was proposed that the northern boundary of the mine would be optimised and that future planning activities would determine methods to maximise the recovery of coal from Block 2 (Loy Yang Power, 1997). Blocks 2 and 3 continue to be noted as ‘Future Mining Blocks’ (Figure 13).

Loy Yang Power also holds an exploration licence for an additional approximately 764 Mt of coal across approximately 1670 ha adjoining the mine site (Figure 13).

AGL Loy Yang has submitted an application to convert the existing Exploration Licence, which abuts to the east of Mining Licence MIN 5189 into a Retention Licence. 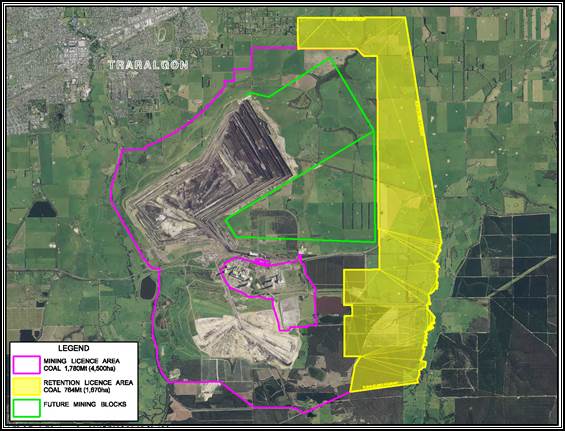