Gloe (1984) documented the stages at which discovery, exploration and development of the Victorian brown coals took place. Brown coal was first discovered in the Latrobe Valley in the 1850s to the north-east of Moe. Numerous other discoveries had been made in previous decades but attempts at development were hampered by complex geological structure and variable coal quality (Gloe, 1984).

In the 1880s, activity initiated by a number of companies around Morwell led to the discovery of 30 m and 50 m thicknesses of brown coal. When six seams totalling 245 m thickness were encountered during drilling in 1890, the Mines Department proclaimed that the deposits were probably the greatest in thickness yet discovered in the world. In the early 1900s a programme of drilling established the presence of a large resource sufficient to establish the State Electricity Commission of Victoria in 1921. The State Electricity Commission of Victoria (SECV) oversaw the development of the brown coal resources of the State with an initial focus on establishing a power station and to manage electricity generation and supply (Vines, 2008). Exploration and resource delineation continued with further major phases of drilling from 1922 to 1941, 1941 to 1955, 1955 to 1980 and 1980 to 1990 (Gloe, 1984).

In the 1950s long-term planning to determine total coal resources and characteristics was undertaken. The variability in coal quality had become a processing issue and so repeat drilling took place in areas previously drilled but this time to greater depths and in order to test coal samples for key quality parameters (Gloe, 1984). Through the 1960s to 1980s, a combination of remote sensing using geophysical techniques and facies modelling followed by drilling helped to delineate additional fields outside the Latrobe Valley such as the Alberton coalfield (Holdgate, 2003).

Mining activities in the Gippsland Basin bioregion are currently restricted to three mining licences (Figure 10 and Table 10). Three separate companies hold these licences to mine brown coal for electricity generation: Yallourn Energy Pty Ltd, Hazelwood Power Corporation Pty Ltd and AGL LYP 3 Pty Ltd. Three other mining or retention licences are located in the Gippsland Basin bioregion (mining licence (MIN) 5526, retention licence (RL) 2010 (MIN 5328), and RL 2013). A retention licence is an intermediate licence between an exploration licence and a mining licence. It allows activities such as intensive exploration, research and other development required to demonstrate the economic viability of mining. 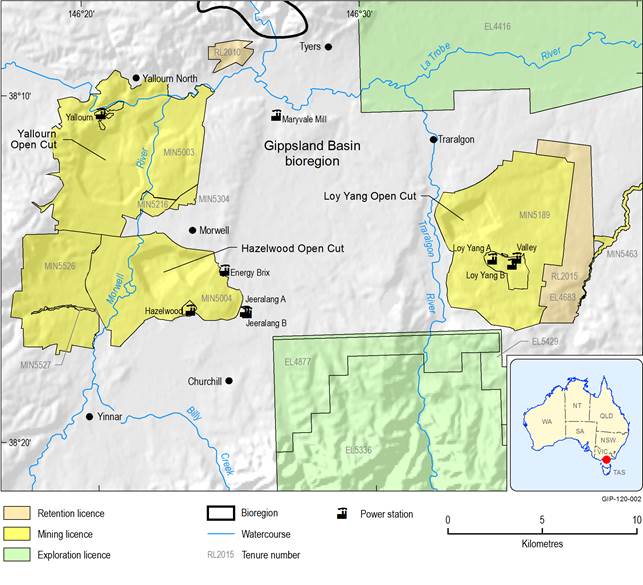 Grey background shading is from a digital elevation model (DEM). Within the yellow MIN areas, the open-cut mines are visible. Data: Department of Economic Development, Jobs, Transport and Resources (Dataset 2)