Twenty-eight mineral exploration licenses (as at 19 May 2015) in the Gippsland Basin bioregion have selected brown coal, black coal and/or coal seam gas (CSG) as their target mineral for exploration (Figure 9). Under the same exploration licence, a company may also nominate other minerals, such as mineral sands. CSG activities in Victoria are governed by Victoria’s Mineral Resources (Sustainable Development) Act 1990 (MRSDA), however shale and tight gas are regulated under Victoria’s Petroleum Act 1998 (Petroleum Act). Sixteen of the 28 licences have selected CSG as one of their target commodities. Table 9 lists the owners and status of the licences shown in Figure 9. The majority of CSG activity carried out to date is limited to desktop studies, although there has been some drilling (e.g. Gastar Exploration Ltd, 2005).

IER consider that the deeper lignite seams within EL 4416 contain biogenic natural gas and are planning to investigate this potential with further drilling and gas testing (IER, 2015a).

An independent report by MHA Petroleum Consultants, commissioned by Ignite Energy Resources, has estimated that EL 4416 hosts a 3.7 trillion cubic feet (TCF) natural gas contingent resource (2C – best estimate of a contingent resource) (IER, 2015a). However, it is currently unclear how this resource estimate was calculated as no gas content is known to have been measured.

The other advanced coal resource exploration/appraisal project in the Gippsland Basin bioregion is in EL 5173 (Figure 9), 8 km south-west of Longford. Verso Energy Pty Ltd plan to use microbial coal conversion (MCC), targeting the Traralgon seams as part of its Coolung pilot project (Verso Energy, 2015), which sits within the Coolungoolun coalfield. 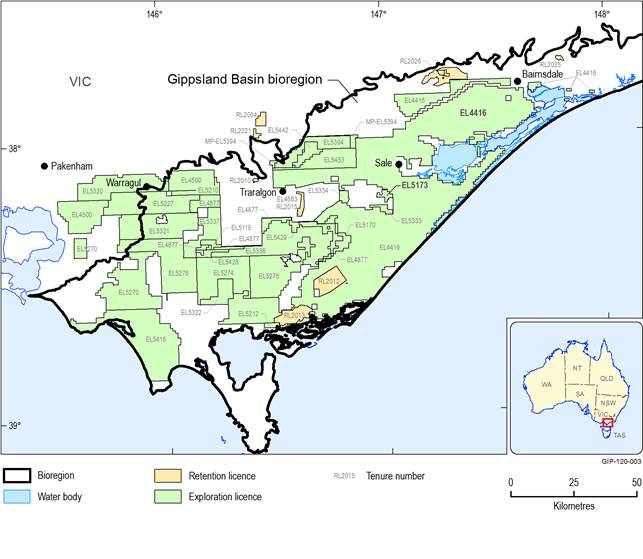