The distribution and surface expression of black coal in South Gippsland is controlled by the north‑east striking Early Cretaceous basin forming faults (Holdgate, 2003). Most of the known black coal seams of South Gippsland are found at shallow depths (i.e. less than 400 m) on or adjacent to subsurface Paleozoic highs – the Wonthaggi and Tyers basement ridges. Productive black coal measures are confined to Lower Cretaceous Strzelecki Group units in west Gippsland.

The black coal measures in the Wonthaggi region are strongly faulted, and there appear to have been two periods of faulting during the Cenozoic. East–west faults predominate at Wonthaggi. They dip to the north at about 65o, in contrast to the prevailing southerly dip of the coal seam and the major Kongwak Fault. The sediments between the top and bottom seams in the Dudley Basin thicken to the north, towards the Kongwak Fault, which may therefore have been active during sedimentation.

Dudley (1959) estimated that there is more than 6 km of Mesozoic sedimentary rock in the Balook Block, although it has not been tested by drilling to that depth. Onshore, the thickest sequence drilled of the Strzelecki Group exceeds 2500 m in Wellington Park-1 (Ingram, 1962) and Holdgate-1 wells without reaching basement. Only two wells have drilled through the sequence near the northern basin margins to reach basement: Megascolides-1 (Grosser, 2005) south of Warragul and Duck Bay-1 (Ingram, 1964) near Bairnsdale.

Figure 4 shows the locations of the black coalfields in the Gippsland Basin bioregion. 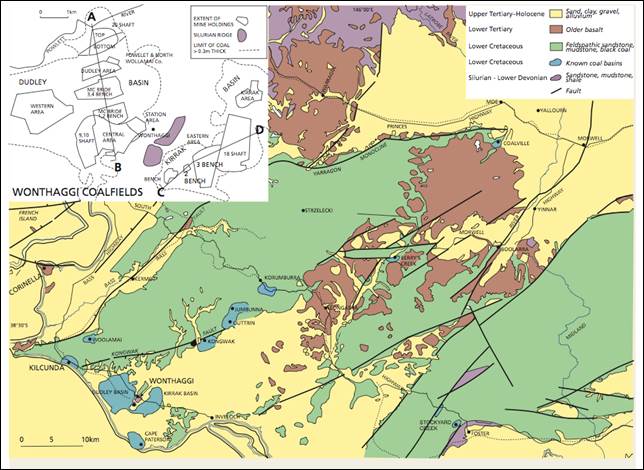 Figure 4 Geological map of South Gippsland Highlands showing locations of the main black coalfields in the Gippsland Basin bioregion. Inset shows layout of the State Coal Mine workings at Wonthaggi.

Most of the coal recovered was from the State Coal Mine at Wonthaggi, which was worked from 1909 to 1968. Here, the Kirrak Basin is separated from the Dudley Basin by a north-easterly ridge of Silurian basement rock overlain by alluvium (Figure 4). The coal measures generally strike east–west and dip southerly. There are two persistent seams separated by 150 m of feldspathic sandstone in the Kirrak Basin (Edwards et al., 1944). The upper seam is thin, but the lower seam is up to 2.2 m thick and has been mined over an area of 400 ha.

Three areas were mined in the Kirrak Basin, commencing with the Eastern Area tunnel driven in 1915 to 1918. The deepest workings in the Eastern Area were in the south section of No. 18 shaft, where a steeply dipping seam was worked to a depth of 440 m.

In the Dudley Basin eight seams were recorded in bores in a vertical section of 300 m, but only two were subsequently worked. The lower seam splits locally into ‘top’ and ‘bottom’ seams which were extensively worked in the Western Area pit. The ‘top seam’ may be correlated with the lower seams of the Kirrak Basin and attains a maximum thickness of 3 m near the Dudley Area shafts. It was mined over 650 ha in eight separate areas, each defined by major bounding faults with throws exceeding 30 m.

The ‘bottom seam’, commonly with shaly bands, is 75 to 105 m below the upper seam, and rarely thicker than 1 m; near the western limit of the coalfield the seam splits. The upper seam varies from massive coal 0.45 m thick to a banded seam up to 1.25 m thick, half of which comprises mudstone bands. The lower seam contains up to 1.1 m of coal with a persistent mudstone parting varying from 0.15 to 1.25 m in thickness (Edwards et al., 1944). It was mined over 530 ha in six areas.

The Korumburra Coalfield produced just over 2 Mt of coal from 1893 to 1962 (Holdgate, 2003). Five distinct seams were recorded by test bores which reached the underlying Silurian rocks. The top (No. 1) and main seams (No. 2), stratigraphically 25 m apart and about 1 m and 1.4 m thick respectively, were extensively worked. There was production from the middle seam (No. 3), 82 m below the main seam, and minor production from the deep seam (No. 4), about 55 m below the middle seam. This seam was located by the Coal Creek shaft in 1891 and was reported to be 1.8 m thick with clean coal. Later diamond drilling revealed at least 1 m of carbonaceous mudstone bands in this seam. The deepest seam (No. 5) is about 15 m below the so-called deep seam and is about 60 cm thick.

The coal dips mainly to the north-west, and was worked over 200 ha by three main companies: Coal Creek Mining Company, Sunbeam Collieries, and the Austral Coal Company (see Vines, 2008).

The south-westerly extension of the Korumburra Coalfield has a main seam varying from 1.0 to 1.5 m in thickness and was worked at intervals between 1894 and 1962. It produced nearly 3 Mt of black coal from 300 ha (Jumbunna Colliery and Outtrim Howitt produced 93% of this). The seam dipped to the north-west and thinned out rapidly towards the margins of the basin (Holdgate, 2003).

Coal seams crop out on the cliffs and along the wave-cut platforms between San Remo and Cape Patterson. The seams were exploited between 1910 and 1966, in the Victorian and Kilcunda mines. A single seam up to 0.7 m in thickness was exploited, producing 522,275 tonnes from an area of 60 ha (Knight, 1988).

From 1884 to 1897, the Coalville, North Coalville, and Moe companies worked a seam about 0.7 m thick in the valley of Narracan Creek by tunnels and a 30 m shaft. The seam dips to the north-west and the coals were similar in quality to the Korumburra coals. A total production of 62,745 tonnes is recorded (Knight, 1988).

At Boolarra a northward-dipping seam 0.7 m thick produced 500 tonnes in 1887 to 1890. From 1928 to 1929, 3260 tonnes were won from a steep north-west-dipping seam near Berrys Creek (Figure 4) at Mirboo North. Richard Daintree discovered coal 1.0 m thick, 2 km north-east of Kernot, but there was no production. Seams thinner than 1.0 m are known at Billys Creek near Hazelwood, Stockyard Creek near Foster, and the upper Powlett River near Kongwak (Knight, 1988).

Black coal in the Gippsland Basin is a banded bituminous type with medium moisture and volatile hydrocarbon content and medium to high ash content.

Although less efficient than black coal from many mines in NSW, it is of good steaming quality and was used for power stations and in locomotive boilers, but was unsuitable for gas and coke production.

Altogether, 22.68 Mt of coal was mined from 12 pits, and reserves remaining in situ are estimated at 9.47 Mt (gross) (Table 3). Frequency of faulting and difficulties in mechanisation made mining uneconomic once the thicker seams were worked out.

Several areas with coal production potential adjoin former mines, and within some existing mines pillars were not removed or workings did not reach areas with proven reserves. Records of 1600 bores drilled on the Wonthaggi coalfield between 1908 and 1957 are available in the Geological Survey of Victoria archives.

Table 3 Reserves of black coal in the Gippsland Basin bioregion