1.1.6.1 Connectivity between groundwater and surface water

Although some useful general information about connectivity in the Maranoa-Balonne-Condamine subregion is available for specific locations, details are lacking in many areas and available information appears contradictory in places. Most of the findings described below are based on river and groundwater levels either at a single point in time (e.g. CSIRO, 2007) or for a single season (e.g. Baskaran, 2009). Since connectivity between streams of the Condamine-Balonne river system and the alluvial aquifers is spatially and temporally variable (Moran and Vink, 2010), these studies do not provide insights into the seasonal changes in surface water – groundwater interactions.

Regional assessments of surface water – groundwater connectivity were undertaken as part of the Murray-Darling Basin Sustainable Yields Project (Parsons et al., 2008). In the Maranoa-Balonne-Condamine subregion, connectivity was assessed in the Border Rivers, Barwon River and Condamine-Balonne river systems. The Maranoa River and the Moonie river basin (see Figure 28) were excluded from the assessment because the degree of connection between streams and aquifers is largely unknown (CSIRO, 2008a). Connectivity mapping was based on a snapshot in time of fluxes to or from the major rivers. The study used data from June 2006 in the Border Rivers and Barwon-Darling river basins and from March 2006 in the Condamine-Balonne river basin, times that represented historically low-flow periods in these areas (CSIRO, 2007, 2008a, 2008b and 2008c). Results are shown in Figure 29.

The north branch of the Condamine River and its Oakey Creek tributary were classified as ‘maximum losing’, the watertable being separated from the stream by an unsaturated zone. CSIRO (2008b) attribute this to large-scale groundwater extraction in the area. Since the groundwater is already significantly depleted, the flow is unlikely to be changed by any further drawdown in the water level (Moran and Vink, 2010). The upper reaches of the river are mostly classified as ‘medium losing’, changing to gaining conditions in the area of Chinchilla Weir. CSIRO (2008b) state that gaining conditions may seasonally extend further downstream. Downstream from Werribone Weir, the Balonne-Culgoa River is classified as ‘medium losing’ to the border with NSW, beyond which it changes to ‘low losing’. CSIRO (2008b) note that the Condamine-Balonne system is seasonally variable in character from Chinchilla Weir to the border. The pattern of gaining and losing stream reaches in Figure 29 is generally supported by the groundwater contours on Figure 25 and Figure 23. 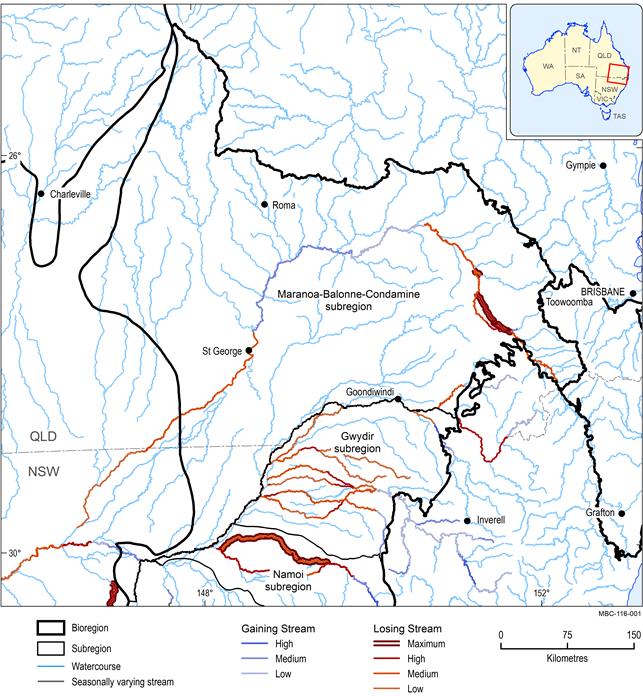 Not all watercourses are classified. Maximum losing conditions occur where the watertable is separated from the streambed by an unsaturated zone. The additional classification of high, medium or low losing for these reaches refers to the flux from streambed to watertable

Intensive groundwater extraction for irrigation since the 1960s has lowered the potentiometric surface and is believed to have caused groundwater across the main body of the Condamine Alluvium to be largely disconnected from surface water. In the upper regions of the alluvium (Killarney-Warwick area), reasonable connectivity between surface water and groundwater is thought to exist and groundwater levels are consequently influenced by river levels (J Chavasse, 2013, pers. comm.). Evidence for this includes a considerable decrease in the level of the modelled potentiometric surface relative to the topographic surface moving from the upper catchment into the central reaches of the alluvium. In addition, electrical conductivity in the Condamine River is comparable to that of groundwater in the alluvium in the upper catchment but not in the central and lower regions of the Condamine Alluvium, where groundwater has become significantly more saline. Decline in hydraulic head in the Condamine Alluvium due to extraction of groundwater over the past 40 years has induced an upwards hydraulic gradient from the underlying Walloon Coal Measures, resulting in the influx of saline waters (Barnett and Muller, 2008; Hillier, 2010).

A study commissioned by Queensland Department of Environment and Resource Management (DERM), reporting on the conceptual hydrogeology of the Central Condamine Alluvium, undertook an analysis of groundwater and stream gauge transects which confirmed that steambed recharge from the Condamine River and North Branch is potentially occurring along the entire length of the Condamine River (Figure 20) (KCB 2010). The study also considered that the maximum losing reach of the Condamine River (Figure 30) reported by CSIRO (2008b) extends further downstream and that although disconnected surface water – groundwater conditions are inferred for most of the Central Condamine River Alluvium, the actual mechanisms governing stream loss are complex, and a dynamic zone of variable saturation is likely to exist between surface water and groundwater (KCB 2010).

Comparison of hydrographs from the Condamine River with bore hydrographs at different locations in the river basin indicates large variation in connectivity between surface water and groundwater across the alluvium (Figure 31). Figure 31 shows a hydrograph from the gauging station at Loudouns Bridge (Central Condamine Alluvium) on the Condamine River superimposed on a bore hydrograph from a monitoring bore approximately 100 m east of the river and 9 km upstream (Registered Number 42230152). 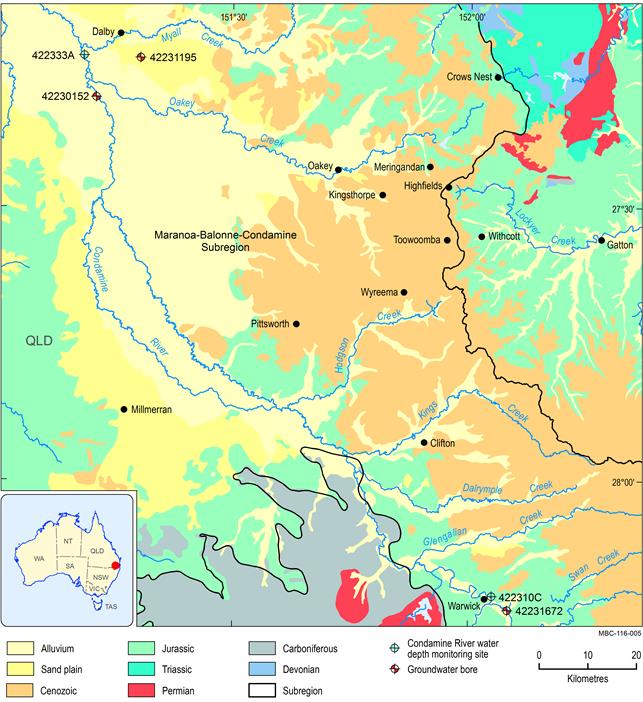 Locations of these stations are shown in Figure 30

Locations of these stations are shown in Figure 30

Figure 33 shows a hydrograph from the gauging station at Warwick (upper reaches of Condamine Alluvium) on the Condamine River superimposed on a bore hydrograph from a monitoring bore approximately 4 km away (Registered Number 42231672). These hydrographs are plotted at a different time scale to those in Figure 31 and Figure 32 due to data availability (2 years, in comparison to 20 to 30 years). Surface water is clearly contributing to the groundwater recharge, as evidenced by high river level events being mirrored by groundwater levels of subdued magnitude. The lag between surface water and groundwater peaks is approximately one week for the two major flood events, a significantly more rapid response than that inferred from the hydrographs of the Central Condamine Alluvium (Figure 31). Other processes are obviously affecting groundwater levels in this area of the alluvium; extraction for irrigation being the most likely. Note the separate vertical axes for the two water levels. The magnitude in variation of groundwater levels appears to be greater than that of surface levels but they are in fact 0.35 m and 1 m, respectively, when the different axes are taken into account. Similarly, it is important to note that these groundwater levels are always below the surface water levels.

Locations of these stations are shown in Figure 30 . Note the separate vertical axis for the two water levels

Figure 34 shows a groundwater mound along the axis of the Balonne River north of Whyenbah, interpreted by Kellett et al. (2006) as river bed underflow leakage, acting as a line source of recharge to the upper alluvial aquifer. These authors also proposed that the northern and western margins of Lake Kajarabie (on the Balonne River north-west of St George) were important sources of recharge for the upper alluvial aquifer. Further, groundwater with Na-HCO3-Cl type major ion chemistry, suggesting local river recharge, occurs in bores adjacent to the Maranoa and Balonne rivers upstream of St George, the Balonne River at Whyenbah and the Narran and Culgoa rivers to the west and south-west of Dirranbandi (Kellett et al., 2006).

The conclusion of bed underflow leakage via the Maranoa River is supported by the airborne electromagnetic conductivity 30 to 40 m depth slice shown in Figure 35 which depicts a resistive lobe associated with the lower alluvial aquifer, which is likely to be a result of inflow of fresh, low conductivity water from the river. 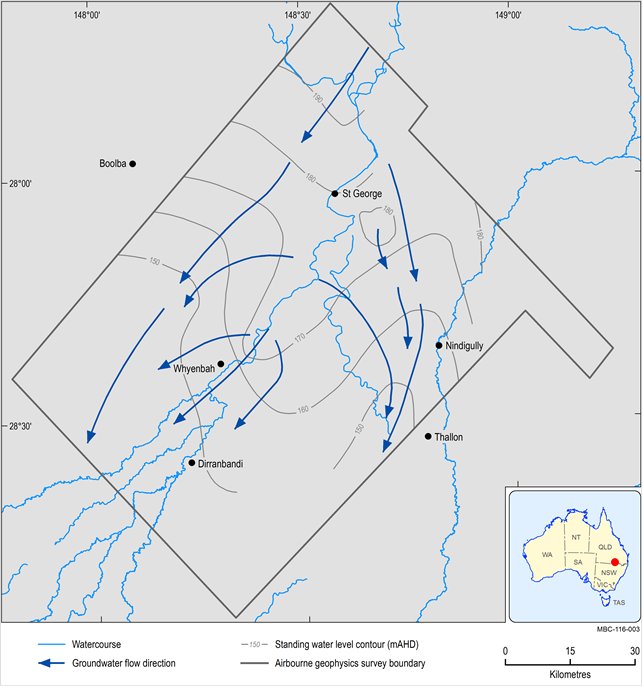 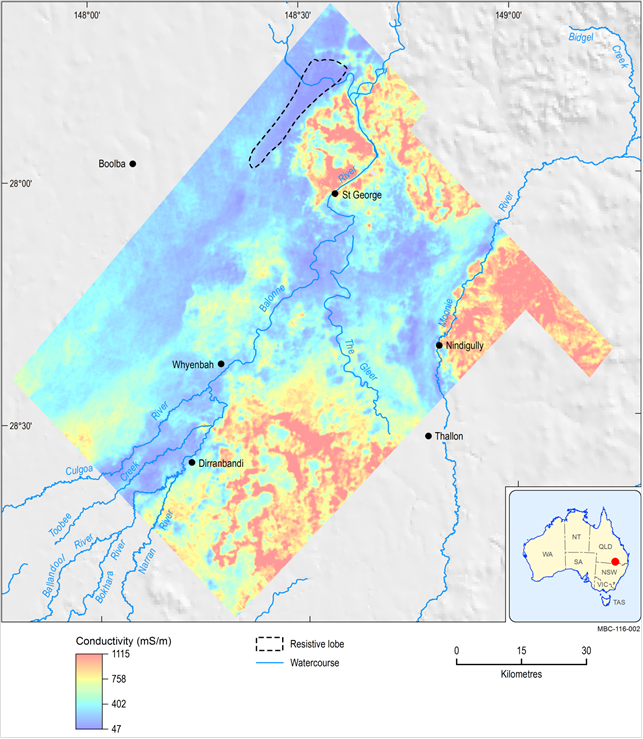 In the south of the subregion, the Dumaresq and Macintyre rivers and the Macintyre Brook are mostly classified by CSIRO (2007) as ‘losing’ in the groundwater extraction area of the Queensland Border Rivers Alluvium. CSIRO (2007) indicate that comparisons between river levels and groundwater levels over time at select locations commonly show that the surface water – groundwater level relationships in Figure 29 in the Border Rivers area are maintained. However, gaining conditions in some stream reaches could be reversed over short time periods in response to flood events.

In contrast to CSIRO (2007), Kelett and Stewart (2013) note that recharge to groundwater from the Dumaresq River and Macintyre Brook is not strongly manifested in the groundwater surface (see Figure 23) which generally suggests either no interaction with streams or discharge to them in many areas, although the area near Goondiwindi does show groundwater mounding near the Border Rivers.

Kellett and Stewart (2013) note that the configuration of the shallow GAB groundwater surface (see Figure 25) suggests that there is likely to be upward leakage from the GAB to the Border Rivers area drains for GAB groundwater that may in turn contribute a component of baseflow to the river.

The Barwon River is classified as variably ‘medium losing’ or ‘low losing’ from the NSW border to the area near Walgett. In these upper reaches, CSIRO (2008c) state that groundwater levels deepen and the river behaves as a ‘maximum losing’ or disconnected system but this is not recorded on accompanying figures (on which Figure 29 is based). Downstream of Walgett the classification changes to ‘low gaining’ and ultimately to ‘medium gaining’ before the river exits the subregion. CSIRO (2008c) indicate that analysis at several locations showed that most river reaches maintained the relationships shown Figure 29 over time. They note the limitations of the classification method used, stating that some of the classifications in the Barwon-Darling river basin are contradicted in the literature (these areas fall outside the subregion). The groundwater contours on Figure 24 suggest that the Barwon River is a gaining system within the subregion.

The impact of 2030 climate change on surface water – groundwater interaction is predicted to be relatively small for current development scenarios (CSIRO, 2007). However, the nature of these interactions changes depending on water levels in the river, which may vary under coal seam gas or mining development. These changes are in addition to any effects caused by future climate change.