The subregion contains significant parts of five Queensland local government areas (LGAs): Maranoa, Balonne, Goondiwindi, Western Downs and Toowoomba, with small encroachments into the Southern Downs, South Burnett and Murweh LGAs. The NSW part of the subregion is fully contained within the Walgett LGA. For Australian Bureau of Statistics reporting purposes, all of the Queensland LGAs, excluding the urban part of the Toowoomba LGA, are grouped together to form the Darling Downs-Maranoa Statistical Area Level 4 (SA4). Urban Toowoomba is a separate SA4. The full extent of the Darling Downs-Maranoa SA4 extends beyond the area covered by the subregion and some scaling back of the reported statistics is required. In 2011, the populations of Darling Downs-Maranoa SA4 and Toowoomba SA4 were about 125,000 and 144,000, respectively. Both areas have seen population increases of 5.4 to 5.8% since 2007 (ABS, 2013). The Walgett LGA had a population of 6900 in 2011. About a quarter of this LGA is in the subregion.

In the ABS (2011) census, 4.7% of the Darling Downs-Maranoa SA4 indicated they were Indigenous, with a slightly lower proportion (3.4%) in Toowoomba. In the Walgett LGA, 28.1% of respondents were Indigenous.

Approximately 120,000 people are employed in Darling Downs-Maranoa SA4, Toowoomba SA4 and Walgett LGA, or closer to 95,000 for the subregion, accounting for some of those workers being outside the subregion. Table 4 summarises the main sectors of employment for the Maranoa-Balonne-Condamine subregion (based on national regional profile data by SA4 and LGA (ABS, 2011)). Of the employed population, 12% works in agriculture, forestry and fishing, although if Toowoomba is excluded from the statistic, it is closer to 21% across the subregion. In Toowoomba, health care and social assistance, retail, education and training, and public administration and safety account for 42.5% of employment. These sectors account for 32% of employment in the wider area. Mining accounts for 3.2% of regional employment.

The gross value of agricultural production in the Condamine and the Border Rivers-Maranoa-Balonne natural resource management regions in 2010–11 was estimated at $2.4 billion, of which $1.5 billion was from crops. The highest value crops were $660 million (28%) from cotton, $580 million (24%) from cereal and legume crops and $216 million (9%) from fruit and vegetable horticulture (ABS, 2012). Livestock products generated $910 million (38%).

Domestic tourism contributed $1.1 billion to the regional economy (or $2.9 million/day) in the 2011–12 financial year for the Southern Queensland Country region, which covers the Maranoa-Balonne-Condamine subregion (TQ, 2012).

Land uses in the Maranoa-Balonne-Condamine subregion are shown in Figure 9. By far the most dominant land use is grazing on improved native pasture, which is undertaken over 75% (almost 110,000 km2) of the subregion. In the east, the heart of the Condamine valley is dominated by cropping and more scattered areas of cropping occur to the west, but not extending much beyond the longitude of St George. Cropping, of predominantly cotton, cereals and legumes, is undertaken over 13.5% of the subregion and in 2010–11 contributed over 60% of gross agricultural production value. Production forestry (6.4%) is significant: most of Barakula State Forest, which is the largest state forest in the Southern Hemisphere and supplies much of Queensland's cypress pine timber resource, is situated to the north of Chinchilla; south-west of Dalby there are extensive areas of defined forest lands; another sizable area is between Chinchilla and Roma; and significant areas are in the Upper Maranoa river basin. Intensive animal production is significant to the north of Toowoomba, with smaller areas to the west and south. Irrigated cropping is undertaken over a relatively small area (2%) of the subregion, but contributes significantly to the total value of agricultural commodities. A similar area of land is used for nature conservation and other minimal uses of natural land. Land use is summarised by area and percentage of subregion in Table 5. 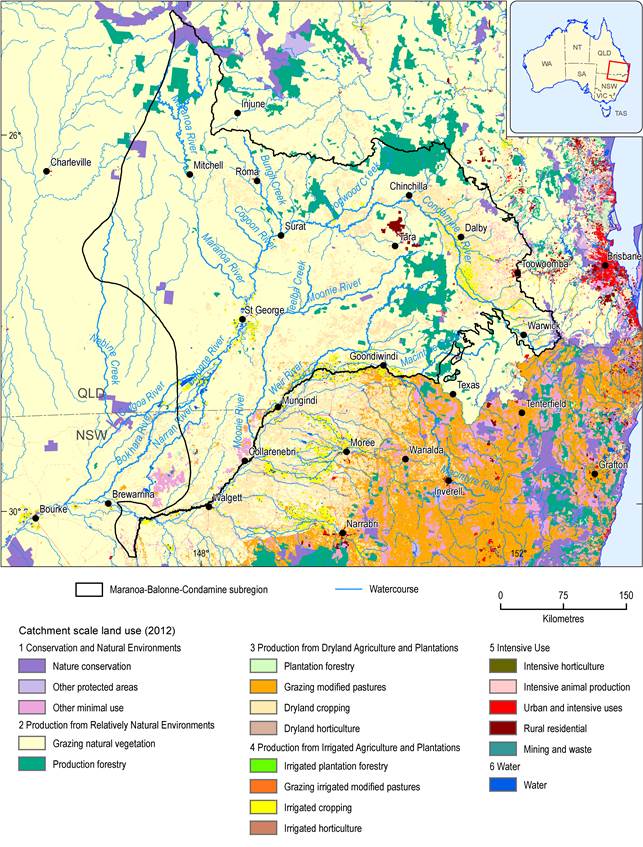 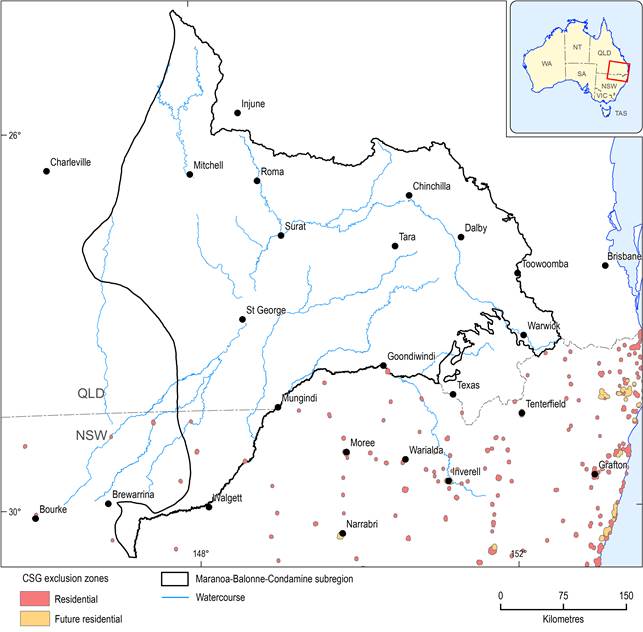 The Indigenous languages map (Horton, 1994) of Australia shows that the Maranoa-Balonne-Condamine subregion was home to a large number of different Indigenous communities: the Barrungum people lived in the Upper Condamine area, the Mandandanji around the lower Condamine-Balonne-lower Maranoa area, the Bigambul people around the Moonie and Macintyre rivers, the Kooma people south and west of St George, the Murawari on the Culgoa floodplains, the Gomeroi around Lightning Ridge, and the Nguri in the Maranoa headwaters.

Queensland’s Aboriginal Cultural Heritage Act 2003 establishes a duty of care on those conducting activities in areas of significance to take all practical measures to avoid harming cultural heritage. Under the Act, a cultural heritage database and register have been established. Approximately 30,000 sites are listed on the register. Penalties of up to $1 million for a corporation and $100,000 for an individual can be imposed for breach of duty of care or damage to cultural heritage. The NSW National Parks and Wildlife Act 1974 requires that the potential impacts of development on an Aboriginal Place be assessed.

In NSW, Moordale Wells, to the north-east of Narran Lakes system, is a significant cultural site and on the NSW register. It lies just outside the subregion, but is within the downstream area of influence of the subregion. Similarly, the Brewarrina Ngemba Billabong, a 261 ha property which is home to four endangered species (the brolga, the blue-billed duck, the freckled duck and the red-tailed black cockatoo) and which was an important tribal meeting place for the Wailwan people, is just outside the subregion. This site was declared an Indigenous Protected Area (IPA) in 2010 under the Australian Government’s IPA program. An IPA is an area of Indigenous-owned land or sea where Traditional Owners have entered into an agreement with the Australian Government to promote biodiversity and cultural resource conservation.