The Bowen Basin spans roughly 200,000 km2 of eastern Australia, covering a large area of eastern Queensland and part of northern NSW (Cadman et al., 1998). In the Maranoa-Balonne-Condamine subregion, the Surat Basin, which is part of the GAB, overlies the southern Bowen Basin, and also extends beyond the margins of these older stratigraphic sequences (Figure 17). However, the main depositional centres of both the Bowen and Surat basins are co-located (the Taroom Trough and Mimosa Syncline, respectively), meaning that the thickest stratigraphic sequences in both basins occur in roughly similar locations.

The Surat Basin covers approximately 300,000 km2, and like the Bowen Basin occurs in Queensland and NSW (Exon, 1976). The Clarence-Moreton Basin, the north-western part of which is part of the GAB, is small in comparison, about 38,000 km2 and is adjacent to the Surat Basin (note that the size of the Clarence-Moreton Basin is inaccurate in some older publications). It also occurs in southern Queensland and northern NSW.

The Bowen, Surat and Clarence-Moreton basins are intracratonic sedimentary basins that have been variably affected by tectonic deformation. These processes have widely caused faulting, folding, volcanic activity and subsidence throughout the basins (Cadman et al., 1998).

Figure 17 Cross-section of the Surat and Bowen basins

Source: Esterle et al. (2013) as modified from Hodgkinson et al. (2009) and QWC (2012) Note: The Helidon Sandstone is a superseded stratigraphic name. It has been replaced by the Woogaroo Subgroup.

There are currently no formally recognised sub-basins for either the Bowen or Surat basins. However, the Bowen and Surat basins are divided into distinct regions based on the structural features that control both the location and thickness of the sedimentary sequences. The main structural features of the Maranoa-Balonne-Condamine subregion are displayed in Figure 18. 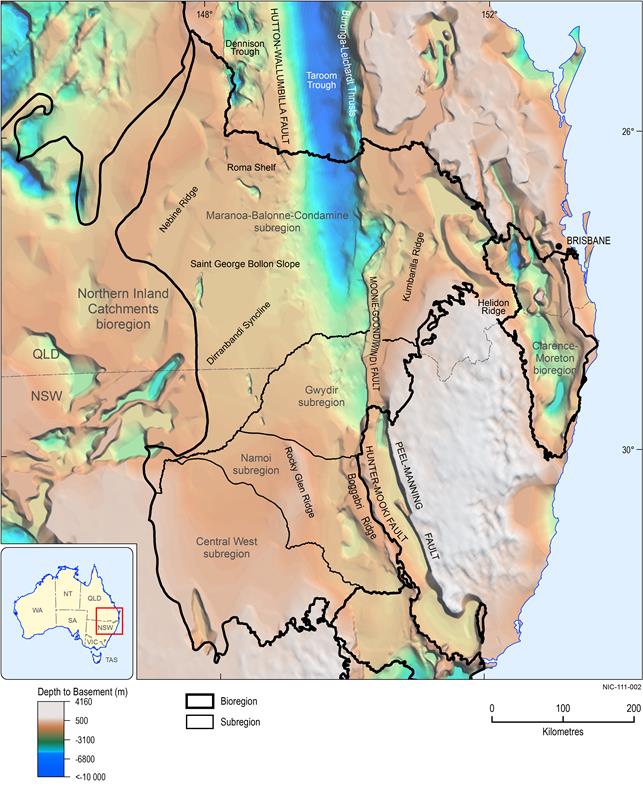 The Bowen Basin is bounded to the east by north-striking faults, including a Triassic thrust system that extends south of the Auburn Arch (Cadman et al., 1998). The Taroom Trough is the major sediment depositional centre in the basin and extends throughout the Maranoa-Balonne-Condamine subregion (Cadman et al., 1998; Draper, 2013). It formed during crustal extension in the Late Carboniferous to Early Permian (McKellar, 1998; Fielding et al., 1993). In the south-west of the Bowen Basin, sedimentary sequences pinch-out and thin over the Nebine Ridge and Saint George-Bollon Slope (Figure 18) (Cadman et al., 1998; Draper, 2013). Half-grabens in the Denison and Taroom troughs are evidence of Late Carboniferous and Early Permian tectonic extension (Cadman et al., 1998; Elliott, 1989). To the west, in the central Bowen Basin, the Springsure Shelf is a half-graben that marks the western boundary of the basin (Draper, 2013). Faulting in the southern Bowen Basin is dominantly north-south oriented. Most faults have normal displacement, although many recent faults are reverse faults (Draper, 2013).

The Moonie-Goondiwindi Thrust and the Burunga-Leichhardt Thrust (Figure 18) are major thrust faults that extend through the strata of the Surat Basin from the underlying Bowen Basin, forming the eastern margin of the Taroom Trough (Exon, 1976; Rohead-O’Brien, 2011; Cook and Draper, 2013). The Hutton-Wallumbilla Fault (Figure 18) is also a major lower basement structure, but is not as strongly developed in the Surat Basin as the previously mentioned faults (Rohead-O’Brien, 2011; Cook and Draper, 2013). These thrust fault systems have formed anticlines and synclines along the outer margins of the subregion (Surat Basin) (Rohead-O’Brien, 2011). The most prominent of these features is the Mimosa Syncline, a reflection of the Taroom Trough in the underlying Bowen Basin (Fielding et al., 1993; McKellar, 1998). The Mimosa Syncline is the main depositional centre of the Surat Basin (Fielding et al., 1993; Yago, 1996; McKellar, 1998). As the subsidence rate slowed during the Middle Jurassic, deposition centred on the Dirranbandi Syncline (Figure 18), once thought to be part of the Mimosa Syncline (Exon, 1976).

The Nebine Ridge is an Early Paleozoic structure, part of the south-eastern Thomson Fold Belt. It is a north-north-east trending basement high, separating the Surat and Eromanga basins (Finlayson et al., 1990; Cook and Draper, 2013). The Nebine Ridge is a fragment of Precambrian cratonic crust that has been altered significantly by tectonism (plutonic and compressional events) in the Carboniferous, and by later uplift in the Middle Jurassic (Exon, 1976). The Roma Shelf (Figure 18) is a structural high, bounded by the Hutton-Wallumbilla (Figure 18) and the Arbroath and Merivale faults (Exon, 1976; Cook and Draper, 2013). Other faults and half-grabens occur west of the Arbroath and Merivale faults (both later reactivated as thrusts), with maximum fault displacements less than 100 m (Exon, 1976; Cadman et al., 1998). The Auburn Arch and the Yarrol Orogen (northern extent of the New England Fold Belt) are structural basement highs that separate the sedimentary rocks of the Surat and Clarence-Moreton basins (Exon, 1976; Finlayson et al., 1990; Cook and Draper, 2013). The separation zone is a Jurassic uplift structure known as the Kumbarilla Ridge (Figure 18) (Exon, 1976; Cook and Draper, 2013).

The Clarence-Moreton Basin is bounded by older granitic and metamorphic basement blocks. Major post-Triassic uplift created the synclinal depression of the Cecil Plains, forming the Cecil Plains Sub-basin, one of the main structural features in the north-western Clarence-Moreton Basin (Jell et al., 2013). The Cecil Plains Sub-basin sits on top of the Horrane Trough, a half-graben feature thought to have formed during strike-slip faulting (Jell et al., 2013). Other significant structural features within the basin are the Helidon Ridge, Gatton Arch, and a small portion of the Richmond Horst is in the subregion (Cadman et al., 1998; Johnstone et al., 1985). The Gatton Arch is outside of the Maranoa-Balonne-Condamine subregion, but forms the main separation zone of the two northern sub-basins.