The area of the Condamine-Balonne river basin is 143,900 km2, which is 14.4% of the Murray–Darling Basin (Thoms and Parsons, 2003). The major surface water resources in the basin are the Maranoa, Condamine and Balonne rivers, as well as numerous wetlands, natural lakes and man-made reservoirs and dams. The other minor rivers and creeks of the basin are the Cogoon River, Merivale River, Dogwood Creek and Bungil Creek (Figure 27). The Nebine Creek catchment that joins the Culgoa River upstream of Collerina is mostly outside the Maranoa-Balonne-Condamine subregion.

Rising from the Great Dividing Range, the Condamine River becomes the Balonne River downstream of Surat (Figure 27). The Maranoa River flows from the northern Carnarvon Range into the Balonne River upstream of Beardmore Dam. Downstream from St George, the Condamine-Balonne River divides into five separate channels. The Culgoa and Narran rivers are the main channels conveying 35% and 28%, respectively, of the long-term mean annual flow at St George, while the Ballandool and Bokhara rivers and Birrie Creek flow only during higher discharge periods (Thoms et al., 2007). The Culgoa River and other distributaries (e.g. Bokhara, Ballandool and Narran rivers) make up the Lower Balonne floodplain system. The Lower Balonne floodplain is heavily dissected by well-defined channels of various sizes forming a complex floodplain channel system (Thoms et al., 2002). These channels may carry a significant proportion of the surface flow during flood events.

Licensed water harvesting by instream interception and on-farm storage is mainly for irrigation. Although both surface water and groundwater are used for irrigation, about 75% of the irrigation water used within the river basin is sourced from surface water diversions. The three main irrigation areas are the Upper Condamine Irrigation Project, the Chinchilla Weir Irrigation Project and the St George Irrigation Area (Thoms and Parsons, 2003). In the Condamine-Balonne river basin, over 112,000 ha of irrigated crops were grown in 2000 and 63% of this was cotton. The long-term baseline mean diversion limit for surface water in the Condamine-Balonne river basin within Queensland is 978 GL/year, comprising 264 GL/year in interception and 713 GL/year in watercourse diversions (MDBA, 2013a).

There are several nationally significant wetlands located on the Lower Balonne river system (see sections 1.1.2 and 1.1.7). The Ramsar-listed Narran Lake Nature Reserve includes the interconnecting Back and Clear lakes and is part of the large terminal wetlands of the Narran River at the end of the Condamine-Balonne river basin. The Narran Lakes system fills more often and holds water for longer than many regional wetlands (NSW Environment and Heritage, 2013). Although the Narran Lakes system is outside the boundary of the subregion, it is located where the Narran River anabranch of the Condamine-Balonne River terminates and is thus potentially susceptible to changes in surface water flow arising in the subregion.

The Balonne River is regulated downstream of Beardmore Dam and the Maranoa River is largely unregulated. There are four major public water storages within the river basin. They are Leslie Dam (106 GL, completed 1985) and Chinchilla Weir (10 GL, completed 1974) on the Condamine River, and Beardmore Dam (82 GL, completed 1982) and Jack Taylor Weir (10 GL, completed 1959) on the Balonne River. In addition to these major reservoirs, the Condamine-Balonne river basin has a range of water infrastructure including Cooby Dam and many weirs, for example Talgai, Yarramalong, Lemon Tree, Cecil Plains, Loudon, Warra, Charleys Creek, Chinchilla, Condamine, Surat and Dirranbandi weirs. Most of the weirs are committed to urban, agricultural and irrigation supply schemes (DERM, 2012a).

Connolly Dam and Neil Turner Weir are the other two public water-holding structures. The total volume of major dams, town water supply dams and weirs in the basin is 268 GL. There are, however, numerous private offstream water storages in the lower parts of the river basin with an estimated combined storage volume of 1916 GL (Webb, McKeown and Associates Pty Ltd, 2007). These private storages are used for harvesting streamflow and overland flow at times of higher river flow (CSIRO, 2008a). 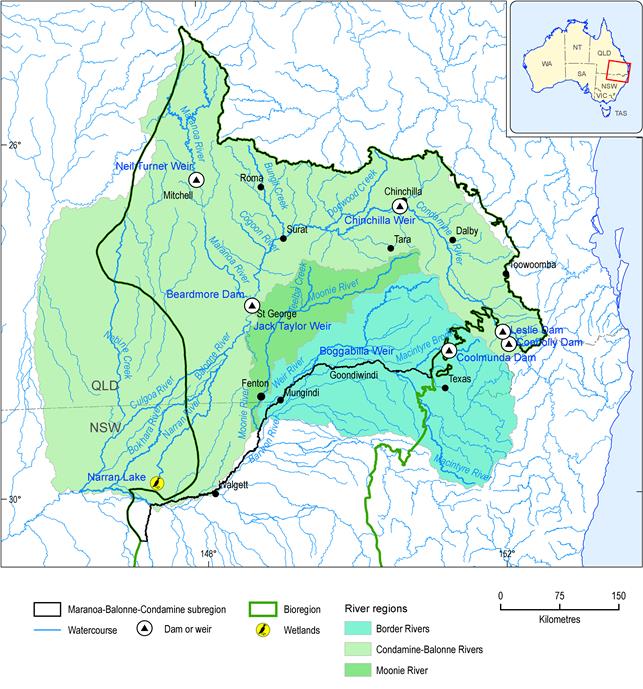 Major floods in the Condamine-Balonne River occur, on average, every two years. A major flood is defined as a flood that causes inundation to large areas, isolating towns and cities with major disruptions to road and rail links and that may require evacuation of houses (Bureau of Meteorology, 2011a). Some of the largest recorded floods were in 1942, 1950, 1956, 1975, 1976, 1983 (twice), 1988, 1996, 2010 and 2011 (Bureau of Meteorology, 2011a). Floods in the Condamine-Balonne River can result in widespread inundation of agricultural land, damage to farming properties and loss of livestock. Figure 28 shows the floodplain extent for the Condamine River upstream of Chinchilla (Condamine Alliance, 2014). The Condamine-Balonne and Maranoa rivers can have entirely different flooding patterns in a given year, depending on the distribution of rainfall in the river basin. 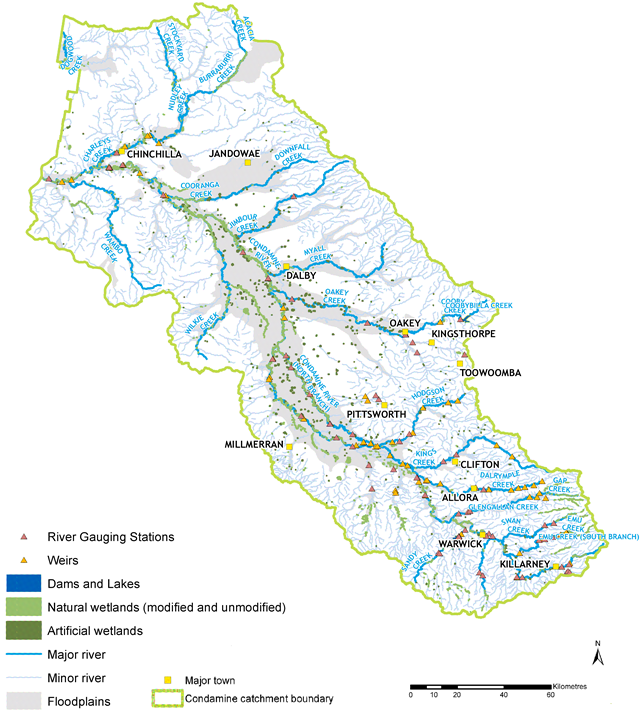 The Moonie River originates from headwaters east of Tara and flows in a south-westerly direction before crossing the NSW border near Fenton and joining the Barwon River (Figure 27). The Moonie river basin (15,100 km2) is one of the most heavily cleared areas in southern Queensland (CEWH, 2013). Moonie River is unregulated. Moonie River’s tributaries are the Thomby, Bidgel, Farawell, Wongle Wongle, Stephens, Parrie Moolan, Toombilla and Teelba creeks. Teelba Creek is the largest tributary of Moonie River. The Thallon Waterholes, which have been identified as a significant ecological site, are filled by overbank flows from the Moonie River during significant flow events (CEWH, 2013).

Although most of the irrigation in the river basin depends on surface water (CEWH, 2013), the basin uses only 0.2% of the total surface water diverted for irrigation in the Murray–Darling Basin. The long-term mean diversion limit for surface water in the Moonie river basin within Queensland is 84 GL/year, comprising 51 GL/year in interceptions by runoff dams and 33 GL/year in watercourse diversions (MDBA, 2013a). In 2005–06 cotton accounted for 92% of the water used in the region. The environmental water requirement for the region is estimated to be between 49 and 52 GL/year (Bureau of Meteorology, 2013).

The Moonie river basin has no major public storages, but has about 87 private off-river on-farm storages (DERM, 2013). The total volume of these storages is not accurately known but was estimated to be 125 GL, all in hillside dams with their own catchment within the river basin (Webb, McKeown and Associates Pty Ltd, 2007). Thallon Weir, upstream of Fenton, has a capacity of 185 ML and supplies water to Thallon. Although irrigated agriculture exists in the river basin, data on irrigation related infrastructure are not readily available.

Teelba Creek, together with other tributaries upstream of Flinton, contributes to major flooding with potential to inundate large areas of low-lying land (Bureau of Meteorology, 2011b). The Bureau of Meteorology assessment of flood potential in the Moonie River suggests that 50 mm rainfall in 24 hours will cause isolated flooding in the immediate area of the heavy rain. Meanwhile, a rainfall event of 50 mm or more in 24 hours over a wide area will most likely cause major flooding, particularly in the middle to lower reaches downstream of Tartha (Bureau of Meteorology, 2011b). The highest flood on record occurred in March 2010, with flood heights of 4.65 and 5.50 m at Nindigully and Thallon gauging stations, respectively.

The Maranoa-Balonne-Condamine subregion contains the north-western part of the Border Rivers river basin (Figure 27). The major surface water resources of the basin that are within the subregion are Weir River, Macintyre Brook, Callandoon Creek and the Macintyre-Dumaresq-Barwon river system.

Surface water sources comprise more than 90% of the water used for irrigation in the Border Rivers river basin. For the Queensland part of the Border Rivers river basin, the estimated baseline surface water diversion limit is 320 GL/year, comprising 77 GL/year in interceptions by runoff dams and 242 GL/year in watercourse diversions (MDBA, 2013b).

Coolmunda Dam in the Macintyre Brook creates one of the major public water storage reservoirs in the river basin, with a storage capacity of 69 GL. Macintyre Brook is a regulated stream and supplies medium security water entitlements estimated to be 6.4 GL/year for irrigators from the Coolmunda system (CSIRO, 2007). The other water storage structures in the area are Boggabilla and Goondiwindi weirs in the Macintyre River, and Greenup, Whetstone and Ben Dor weirs in the Macintyre Brook. The total volume of all major reservoirs, weirs and farm storages is estimated to be about 578 GL for the whole of the Border Rivers river basin, including areas outside of the subregion (Webb, McKeown and Associates Pty Ltd, 2007).

The town of Goondiwindi, downstream of the junction of the Macintyre and Dumaresq rivers, has experienced more than 60 major floods since 1886 including in 1956 (three major floods within six months), 1996 and 2011 (with a record flood level of 10.64 m) (Bureau of Meteorology, 2011c). For the Macintyre and Weir rivers, 50 mm of rainfall in 24 hours over isolated areas or 25 mm of rainfall over more extensive areas will cause stream rises and the possibility of minor flooding. A rainfall event of 25 mm over 24 to 72 hours can cause moderate to major flooding and a 50 mm rainfall in 24 hours will cause isolated flooding in the immediate area of the heavy rain. Generally, rainfall in excess of 50 mm in 24 hours over a large area will most likely cause major flooding, particularly in the lower reaches of the Macintyre and Dumaresq rivers, the Macintyre Brook and the Weir River (Bureau of Meteorology, 2011c).