This section summarises the geological context of the three coal-bearing sedimentary basins of the Maranoa-Balonne-Condamine subregion, the northern-most subregion of the Northern Inland Catchments bioregion (Figure 16). The underlying basement rocks and overlying alluvial and volcanic sequences are not discussed here. The largest basin (by area) in the Maranoa-Balonne-Condamine subregion is the Surat Basin, although the area is also underlain by the southern Bowen Basin, and the north-western section of the Clarence-Moreton Basin. The Surat Basin and the north-western part of the Clarence-Moreton Basin are part of the Great Artesian Basin (GAB).

The basins range in age from Late Carboniferous to Early Cretaceous and all contain compositionally similar sedimentary rocks that formed in depositional environments spanning shallow marine to fluvial settings. The most common rock types are sandstone, siltstone, mudstone, shale, coal, and conglomerate. All of the basins also contain volcanic rocks such as tuff, rhyolite and andesite.

The oldest coal basin in the Maranoa-Balonne-Condamine subregion is the Bowen Basin. It started to form during the Late Carboniferous to Early Permian, mainly due to tectonic extension and subsidence. Subsequent volcanic activity helped to bind the basin before deposition ceased in the Late Triassic. After a time of non-deposition (approximately 30 million years) the Surat Basin formed above the Bowen Basin during a period of steady subsidence. A compressional system caused fault reactivation and volcanic activity within the basin to occur before uplift in the Middle Cretaceous halted the formation of the Surat Basin. The Clarence-Moreton Basin is a wedge-shaped segment of sedimentary rocks derived from a nearby subduction zone. The basin formed during the Late Triassic to Early Cretaceous with Late Cretaceous strike-slip faulting controlling deformation of the basin. Volcanic activity also binds this basin, with reverse faulting and uplift marking an end to deposition.

Black coal is mined extensively from the Bowen Basin’s main coal reserves in the Blackwater Group and Bandanna Formation. The Walloon Coal Measures occur in both the Surat and Clarence-Moreton basins and are the main coal seams developed for coal and coal seam gas in these basins. 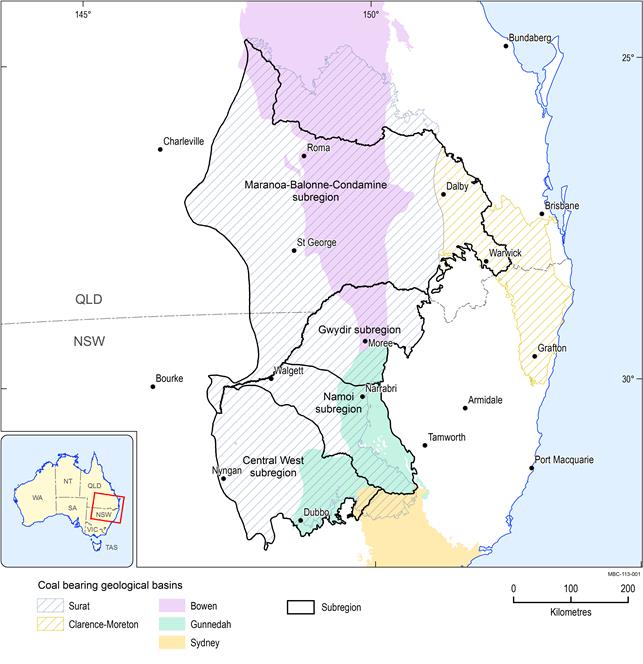 Figure 16 Location of the Maranoa-Balonne-Condamine subregion within the Northern Inland Catchment bioregion and its relation to the geological Surat, Bowen and Clarence-Moreton basins