The stream networks in the Galilee subregion are part of six large river basins in Queensland (Figure 37). The following sections describe details of the surface water systems in Galilee and surrounding regions. 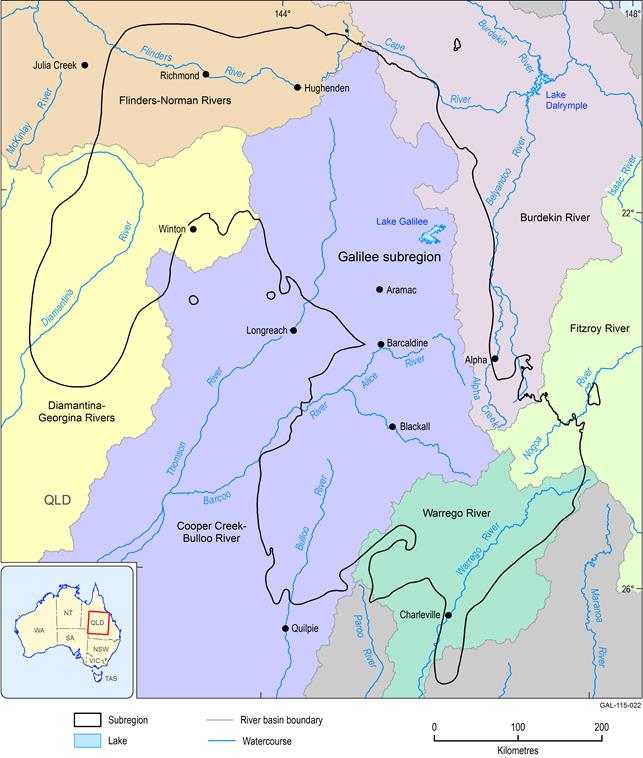 Figure 37 The Galilee subregion and associated nearby river basins

The Cooper creek-Bulloo river basin is located in the core of the Australian arid region. It has a drainage area of 503,565 km2 and covers parts of Queensland, South Australia and NSW (McMahon et al., 2005). The major surface water systems include Cooper Creek and the Thomson and Barcoo rivers, as well as numerous wetlands and lakes in the Cooper creek basin, and the Bulloo River as well as wetlands and lakes in the Bulloo river basin (Figure 38). A notable feature of the system is the extensive floodplain that dominates the basin south of Windorah and divides into two distinct parts near the Queensland-South Australia border. The Bulloo river basin is an internally draining system located between Kati Thanda – Lake Eyre and the Murray–Darling Basin. About 114,000 km2 (or 46%) of the Galilee subregion is part of the Cooper creek-Bulloo river basin which comprises 23% of the river basin.

The stream below the junction of the Thomson and Barcoo rivers is known as Cooper Creek and is characterised by complex anastomosing channels and numerous wetlands and waterholes. Headwater streams originate in the Galilee subregion from the Great Dividing Range of Queensland and feed Cooper Creek through the Thomson and Barcoo rivers. Cooper Creek flows toward the south-west to its final terminus in Kati Thanda – Lake Eyre after passing more than 1500 km of different geographical features. The area of the Cooper Creek floodplain is approximately 15,300 km2 and the width can exceed 60 km at many locations near Currareva. In the dry season, the channels are restricted to numerous lagoons and claypans but during high flow the actual main channel becomes hard to define. In a big flood, the area becomes a huge inland sea broken only by a few ridges and numerous stunted trees (Knighton and Nanson, 2001). Records of large floods in the area extend back as far as the late 19th century, with the most significant episodes of flooding occurring in 1893, 1906, 1949, 1955, 1963, 1974, 1990 and 2000 (Bureau of Meteorology, 2014).

Flow in Cooper Creek has not yet been affected by diversion of water for irrigated agriculture or major dams or weirs (McMahon et al., 2005). In 1995, a consortium of cotton growers proposed 42 GL of water to irrigate cotton at Currareva (Walker et al., 1997). But the proposal was rejected by the Queensland Government in 1996 considering environmental need of water in this region. In a recent water resource plan for the Cooper Creek the Queensland Government reserved a total of 2 GL of unallocated water (200 ML for general reserve, 1300 ML for strategic reserve and 500 ML for the town and community reserve) to meet future demand (DERM, 2011a). There is no major water storage within the Cooper creek-Bullo river basin. 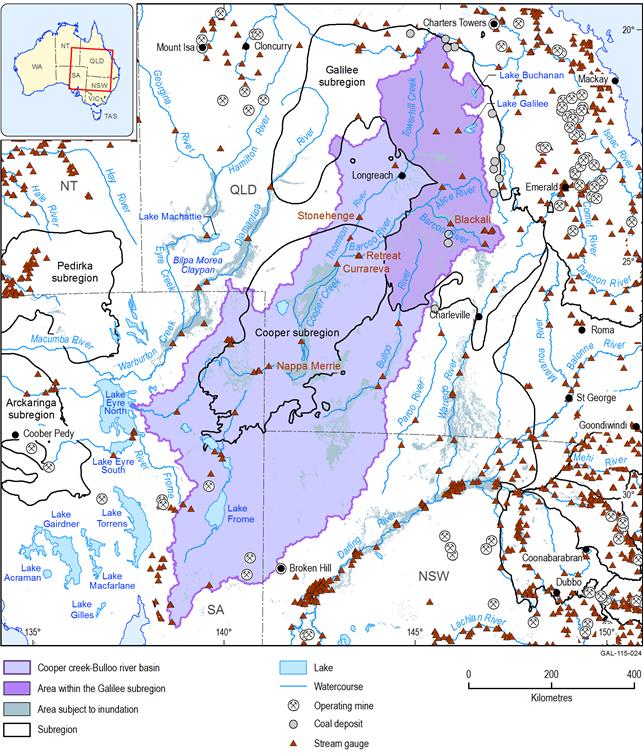 The Diamantina river basin is located in the central part of Australia and is one of the largest river basins of the Lake Eyre Basin. It has a drainage area of 160,000 km2 which is about one eighth of the Lake Eyre Basin, including areas of Queensland and South Australia (McMahon et al., 2005). The major surface water resources in the basin are Diamantina and Mayne rivers and Farrars Creek as well as numerous wetlands and lakes. Other minor stream channels include Western River and Mill Creek as well as a series of small unnamed tributaries and swamps. A notable feature of the system is the extensive floodplain that dominates the catchment above Birdsville. About 43,000 km2 (or 17%) of the Galilee subregion is part of the Diamantina river basin which comprises 36% of the total basin area.

The headwaters of the Diamantina River occur in the Galilee subregion. The entire river length is 1000 km to its terminus at Kati Thanda – Lake Eyre. The Western and Mayne rivers, which also originate in the Galilee subregion, join the Diamantina River above Diamantina Lakes, and Farrars Creek joins below Monkira (Figure 39). The rivers are characterised by complex anastomosing channels, wide floodplains, and numerous waterholes and wetlands. Overall the Diamantina river basin is very flat and the rivers have greatly varying widths of active channel and floodplain. During large flood events, floodwaters can inundate thousands of square kilometres due to the low relief throughout the area. Floods normally develop in the headwaters of the Diamantina River and its major tributaries, however flooding may result from heavy rainfall falling in the middle to lower reaches around Diamantina Lakes. Since 1965, large floods have occurred in 1974, 1991, 2004 and 2010 (Bureau of Meteorology, 2013). 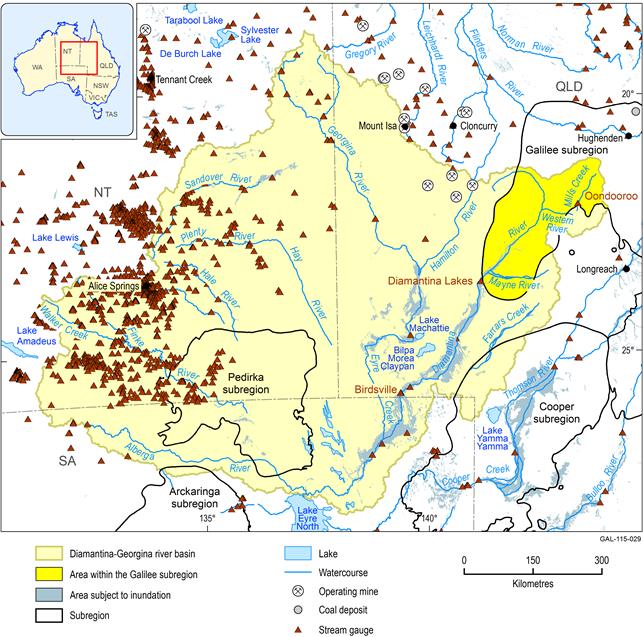 The Flinders river basin is located in north-west Queensland and drains an area of 109,000 km2. The surface water system of the basin includes several large rivers, two dams and numerous wetlands and springs (Figure 40). The Flinders River and two of its tributaries (Dutton and Stawell rivers) originate in the Galilee subregion. A notable feature of the system is its extensive floodplain in the lower part of the basin below Canobie. About 35,000 km2 (or 14%) of the Galilee subregion is part of the Flinders river basin, which comprises 32% of the river basin.

The Flinders River rises in the Great Dividing Range north-east of Hughenden, nearly 1000 km from its entry to the Gulf of Carpentaria. It flows initially in a westerly direction towards Julia Creek, before flowing north to the vast savannah country downstream of Canobie. It traverses through its delta and finally into the Gulf of Carpentaria. The Dutton River joins the Flinders River at Richmond and the Stawell River joins below Richmond. Floods cause widespread inundation of the Flinders floodplain below Canobie and floodwaters of the Flinders and Norman rivers often merge creating a large water body. The region was severely affected by floods in 1974, 2001, 2009 and 2011 (Dutta et al., 2013).

The current surface water availability for the Flinders river basin is about 2023 GL/year and on average about 107 GL/year (or 5%) of this water is allocated for consumptive purposes (CSIRO, 2009). In November 2011, both the Gulf Water Resource Plan and the Resource Operations Plan were amended to establish unallocated water reserves to support Indigenous people in the Flinders areas in achieving their social and economic development aspirations. In May 2013, new water licences were granted from the general unallocated water reserve. A total of 80 GL was granted in the Flinders river basin and 14.2 GL was granted in the Gilbert river basin (DNRM, 2013). 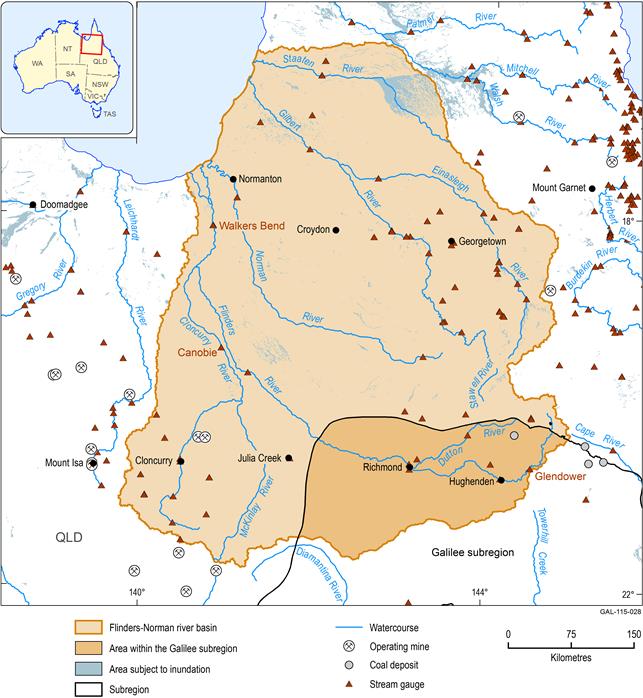 The Burdekin river basin is part of northern Queensland and it covers an area of 134,000 km2. It is the second largest river basin that drains into the Great Barrier Reef lagoon. The surface water system of the basin consists of several large rivers (e.g. Burdekin, Belyando, Bowen, Cape, Clarke and Suttor) as well as numerous wetlands, waterholes and dams (Figure 41). The Cape and Belyando rivers originate in the Galilee subregion. These two rivers carry upper catchments runoff and feed the Burdekin River above the Burdekin Falls Dam. About 20,000 km2 (or 8%) in the east of the Galilee subregion is part of the Burdekin river basin which comprises 15% of the total basin area.

There are a large number of dams and weirs in the Burdekin river basin located on Burdekin, Haughton and Bowen rivers. The Burdekin Falls Dam, which is the largest dam in Queensland, is the major water storage in this basin and much of its water comes from upper catchments runoff including areas within the Galilee subregion. Water licences are allocated under Burdekin Haughton and Bowen Broken water supply schemes. The amount allocated depends on availability of water. Currently the maximum allocation under the Burdekin Haughton water supply scheme is 204 GL for a high priority group and 1300 GL for a medium priority group (DERM, 2010). 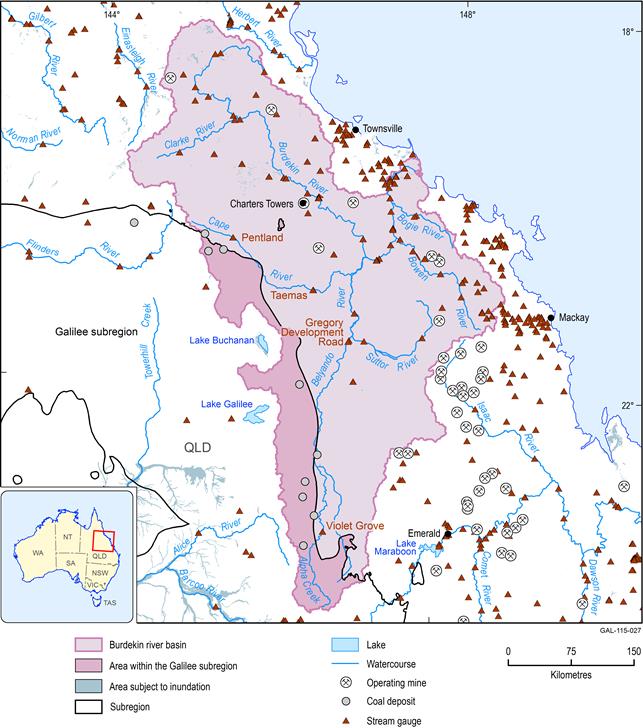 The Fitzroy river basin is located in central Queensland and is bounded to the north by the Burdekin river basin and to the south by the Burnett river basin and covers an area of 142,665 km2. It is the largest river basin flowing to the Great Barrier Reef lagoon. The surface water system of the basin consists of several large rivers (e.g. Fitzroy, Isaac, Nogoa, Comet, Mackenzie and Dawson) as well as numerous wetlands, lakes, weirs and dams (Figure 42). The Claude and Nogoa rivers originate in the Galilee subregion and carry upper catchments runoff via the Mackenzie River through to the Fitzroy River. The Claude River is relatively short and joins the Nogoa River at Myola, 104 km from its origin. About 8000 km2 (or 3%) in the south-east of the Galilee subregion is part of the Fitzroy river basin, which comprises 5% of the total basin area.

The Nogoa River, which is in the far west of the Fitzroy river basin, starts to flow through Emerald and joins with the Comet River. The stream below the junction of the Nogoa and Comet rivers is named the Mackenzie River. The Connors River, which is situated in the northern part of the basin, joins the Isaac River at Yatton. The Isaac River joins with the Mackenzie River just upstream of Tartrus weir. The Fitzroy River is then formed by the joining of the Mackenzie and Dawson rivers in the Duaringa area and it passes through Rockhampton and into Keppel Bay, a further 60 km downstream (Amir et al., 2013). Flooding in the Fitzroy region typically occurs in summer or early autumn, in association with tropical cyclones or intense monsoonal depression. Due to the size of the basin and each of its major tributaries, the Fitzroy river basin frequently experiences flooding following high rainfall events. Several large floods have been recorded since 1859, including a major flood in 2011. The Nogoa River, which originates in the Galilee subregion, produces floods in the city of Emerald and contributes to downstream floods as well.

There are a large number of water storages in the Fitzroy basin including dams, weirs, barrages and ring tanks. Water licences are allocated under four water supply schemes, the Dawson Valley, Fitzroy Barrage, Lower Fitzroy and Nogoa Mackenzie. The amount allocated depends on availability of water. Currently the maximum allocation under the Nogoa Mackenzie water supply scheme is 56 GL. 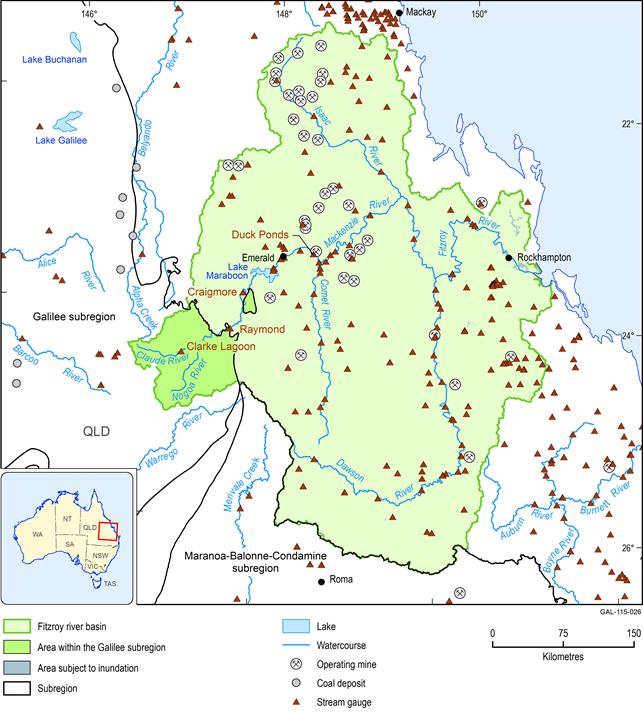 The Warrego river basin is located in south-west Queensland and north-west NSW and covers an area of approximately 65,000 km2. The Warrego River is the only major water channel in this basin and is a tributary of the Darling River. The major surface water resources in the basin are the Warrego, Nive, Ward and Langlo rivers, as well as several wetlands, lakes, weirs and dams (Figure 43). About 29,000 km2 (or 12%) of the Galilee subregion in the south is part of the Warrego basin, comprising 44% of the total basin area.

The Warrego River rises from Mount Ka Ka Mundi in the Carnarvon Range, near Tambo in Queensland, and flows generally south, reaching its confluence with the Darling River downstream from Bourke. It originates in the Galilee subregion and traverses Augathella, Charleville, Wyandra and Cunnamulla over the course of its 1380 km length. Three of its major tributaries (the Nive, Ward and Langlo rivers) also originate in the Galilee subregion and join the Warrego River between Augathella and Charleville. The Warrego is a perennial river and flows through a series of reservoirs, including the Dillalah Waterhole, Ten Mile Waterhole, Lower Lila Dam, Six Mile Dam, Turtle Waterhole and Boera Dam. Although floods are infrequent, the Warrego River produced several large floods in the past including a recent flood in 2011.

Water diversions from the Warrego River are low. Water entitlements in this basin are managed by the Cunnamulla Water Supply Scheme which relies on water from the upper Warrego river basin that is part of the Galilee subregion. There are no high priority water allocations in the scheme. About 2.6 GL of water is currently allocated as medium priority for the purpose of irrigation. 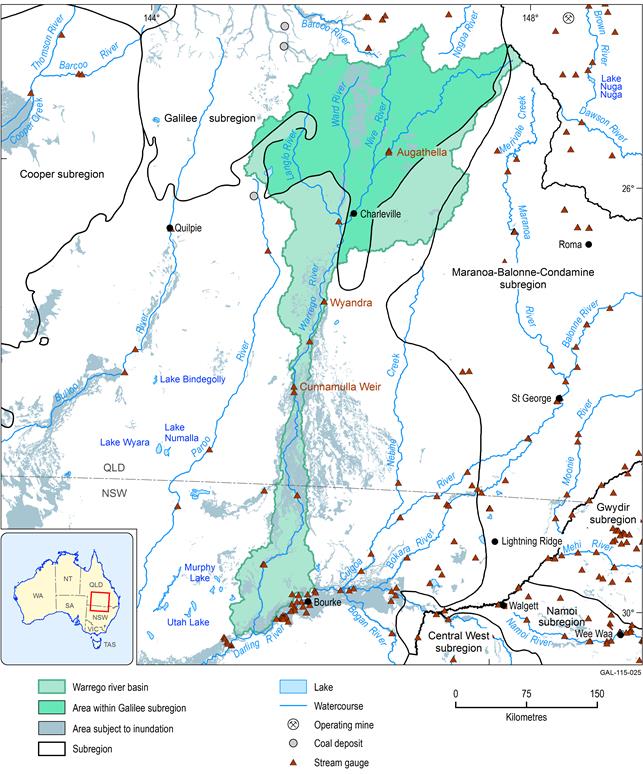