For Figure 19, the stratigraphy is subdivided into three chronostratigraphic intervals: the Late Carboniferous to Early Triassic (Galilee Basin), Middle Jurassic to Middle Cretaceous (Eromanga Basin) and the Cenozoic. The Galilee Basin stratigraphy is further subdivided into three geographical regions, because of the structural influence on the paleogeography of the basin. The northern section includes units around the northern margin of the Galilee Basin as well as the Lovelle Depression. The eastern section covers the Koburra Trough, Aramac Trough and westwards to the Maneroo Platform. The southern section applies to areas of Galilee Basin south of the Barcaldine Ridge.

The Galilee Basin stratigraphy presented in this report is based on the most recent compilation of McKellar and Henderson (2013). Galilee Basin stratigraphic units for most part unconformably overlie the older geological basement terranes and the Adavale, Belyando and Drummond basins. Conformable stratigraphic relations may exist in places between Late Carboniferous Galilee and Drummond basins (Van Heeswijck, 2010).

Galilee Basin stratigraphy is complicated by local variations in the timing of deposition in different parts of the basin. Broadly there are two major depositional intervals; the Late Carboniferous to Early Permian Joe Joe Group and a Late Permian to Middle Triassic sequence. The Late Permian to Middle Triassic sequence includes the: Betts Creek beds, Rewan Group, Clematis Group and Moolayember Formation. A significant unconformity separates the Lower and Upper Permian sedimentary sequences. Further information on paleogeography and stratigraphy of the Galilee Basin is documented in Scott et al. (1995), Hawkins and Green (1993) and Wells (1989).

Lake Galilee Sandstone (Late Carboniferous): fine- to medium-grained quartzose sandstone with minor mudstone. It is the basal unit for the Koburra Trough and outcrops along the eastern margin of the Galilee Basin ; Bradshaw et al., 2009). The maximum stratigraphic thickness is 260 m.

Jericho Formation (Late Carboniferous): consists of diamictite, conglomerate, and sandstone with interbedded siltstone. This formation records up to three glacial – interglacial events, with interglacial sediments deposited in lacustrine to fluvial environments (Jones and Fielding, 2008). The Jericho Formation outcrops along the eastern margin of the Galilee Basin, but also occurs in the Koburra Trough and southern Galilee Basin. The Jericho Formation is up to 760 m thick and includes the Oakleigh Siltstone Member. It was recognised as a distinct seismic facies (G1) by Van Heeswijck (2010).

Jochmus Formation (Early Permian): volcanic-lithic sandstones with interbedded silty tuff. It includes the Edie Tuff Member. The Boonderoo beds, which outcrop along the north-eastern margin of the Galilee Basin, are an equivalent of the Upper Jericho and Jochmus formations (McKellar and Henderson, 2013). Much of the Jochmus Formation was deposited in fluvial environments with minor glaciogenic influence. It occurs in the Koburra Trough, Aramac Depression, and the Lovelle Depression (Hawkins and Green, 1993) but has a restricted distribution in the southern Galilee Basin (Bradshaw et al., 2009). It has a maximum recorded thickness of around 750 m and was recognised as a distinct seismic facies (G2) by Van Heeswijck (2010).

A significant unconformity occurs between the Early and Late Permian sequences. This was a period of non-deposition and erosion.

Weston beds (Permian): An informal stratigraphic unit consisting of sandstone that is unconformably bounded between the Aramac Coal Measures and Betts Creek beds. It is restricted to the Lovelle Depression.

The Betts Creek beds have been correlated with sedimentary rocks in the Bowen Basin. From oldest to youngest, these are the Colinlea Sandstone, Peawaddy Formation, Black Alley Shale and Bandanna Formation. These rock units have also been identified in southern Galilee Basin. Further information on their distribution can be found in Section 1.1.3.4.

The Peabody Formation and Black Alley Shale thin onto the Barcaldine Ridge and are largely restricted in distribution to the southern Galilee Basin (Wells, 1989).

Bandanna Formation (Late Permian): interbedded sandstone, siltstone, mudstone and coal deposited in paludal, fluvial and lacustrine environments. Only the Black Alley Shale and Bandanna Formation have been identified in the Powell Depression (Hawkins and Green, 1993). 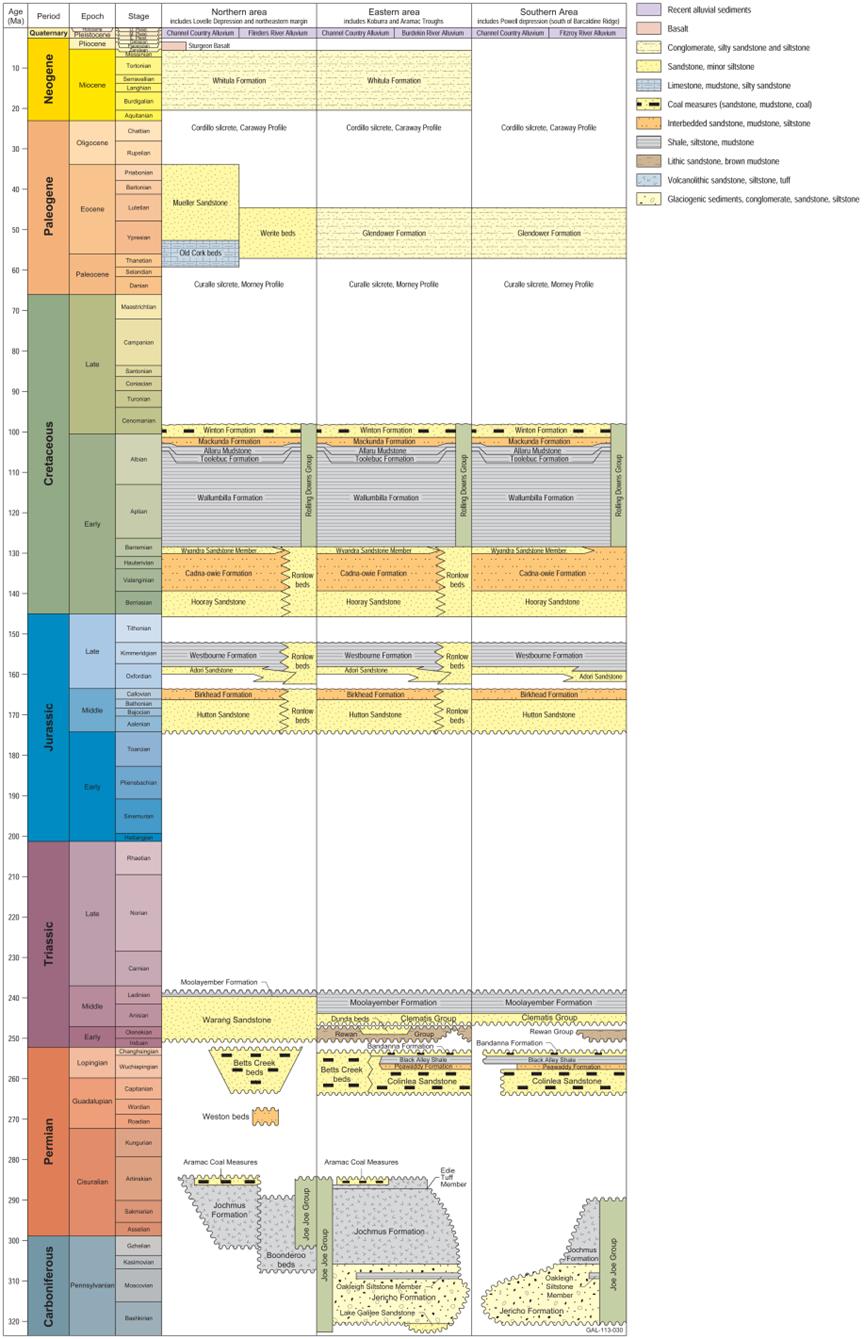 Rewan Group and Dunda beds (Early Triassic): consists of interbedded light grey sandstone and grey-green mudstone (Hawkins and Green, 1993). It was recognised as a distinct seismic facies (G4) by Van Heeswijck (2006).The Dunda beds are a predominantly sandy facies that is conformable with upper sections of the Rewan Group. The Dunda Beds outcrop along the north-eastern margin of the Galilee Basin and occur in the vicinity of the Koburra Trough.

Clematis Group (Early – Middle Triassic): unconformably overlies the Rewan Group and consists predominantly of sandstone with minor siltstone, mudstone and conglomerate deposited in braided fluvial environments. This is an equivalent of the Warang Sandstone.

Moolayember Formation (Middle Triassic): consists mostly of siltstone and mudstone deposited in lacustrine and fluvial environments. It conformably overlies the Clematis Group and blankets much of the Galilee Basin and Maneroo Platform (Hawkins and Green, 1993) and is the uppermost stratigraphic unit of the Galilee Basin sequence.

From oldest to youngest the Eromanga Basin sequences include:

Ronlow beds (Middle Jurassic – Early Cretaceous): quartzose sandstone with minor siltstone, mudstone and coal deposited in fluvial to floodplain environments. It overlies parts of the northern Galilee Basin and outcrops along the eastern margin of the Eromanga Basin as far south as Barcaldine.

‘Ronlow beds’ is an informal stratigraphic name (Geoscience Australia, 2012), but the rocks are an equivalent of the Hutton Sandstone-Hooray Sandstone-Cadna-owie Formation, which occur in other parts of the Galilee subregion. Several depositional hiatuses are present in the Late Jurassic to Early Cretaceous section of the Ronlow beds (Cook et al., 2013).

The Birkhead Formation consists of interbedded sandstone and siltstone with minor shale. The Adori Sandstone is mostly sandstone with minor siltstone, and the Westbourne Formation is dominated by siltstone and shale. The Birkhead Formation was deposited in fluvial and lacustrine settings, whereas braided fluvial systems dominated during deposition of the Adori Sandstone. The Westbourne Formation was predominantly deposited in a lacustrine setting (Draper, 2002).

The Wallumbilla Formation to Allaru Mudstone sequence consists predominantly of shale and mudstone with minor impure limestone and volcanic-lithic sandstone. These units were deposited in shallow to deep marine environments and represent a significant marine transgressive phase across the Eromanga Basin.

The Mackunda Formation consists of interbedded volcanolithic feldspathic sandstone, siltstone, and mudstone with minor limestone. It was deposited in shallow marine to marginal marine environments during the final regression in the Eromanga Basin.

In the Galilee subregion, significant erosion and intense weathering occurred during the Late Cretaceous to Early Palaeogene (Early Cenozoic). This resulted in the formation of the Morney weathering profile, which consists of up to 95 m of kaolinised deeply weathered sediments capped by 5 m of silcrete. Sedimentation recommenced in the Late Paleocene with the main stratigraphic units being:

Glendower Formation (Late Paleocene – Middle Eocene): comprises up to 70 m of quartz sandstone, pebble conglomerate, sandy conglomerate and subordinate siltstone and mudstone with a well-developed upper silcrete. It occurs as an irregular elongate valley-fill tract that extends across the Galilee subregion from near Hughenden to south-west of Longreach. From Longreach it develops into a sheet-like deposit that covers much of south-western Queensland, as well as the south-western Galilee subregion. The Glendower Formation has been variously correlated with (Grimes, 1980; Draper, 2002), or included in (Senior, 1979) the Eyre Formation (Callen et al., 1995), which is a widespread (commonly lignitic) fluvial deposit in the geological Lake Eyre Basin of South Australia.

Old Cork beds (Late Paleocene): the sub-circular Old Cork Basin occurs west of the Cork fault over the Lovelle Depression of the Galilee Basin and contains generally flat-lying sediments with extensive silicification and ferruginisation of the upper part of the sequence. The basal Old Cork beds comprise up to 78 m of freshwater (lacustrine deposited) limestone and mudstone with subordinate silty sandstone, calcareous sandstone and sandy siltstone (Cook, 2013).

Similar Paleogene continental lacustrine, paludal and fluvial sediments occur in the Springvale Basin at the north-western margin of the Galilee subregion. It outcrops as the Werite beds at the eastern margin of the Lovelle Depression (Cook, 2013).

Whitula Formation (Miocene): comprises up to 160 m of interbedded fluvial and lacustrine conglomerate, quartzose sandstone, siltstone and mudstone which is partially gypsiferous and lignitic. It unconformably overlies Cretaceous rocks and the Paleocene Glendower Formation. Similar sediments are recognised in the Springvale Basin (Horse Creek Formation) at the north-western margin of the Galilee subregion.