The widely used Köppen-Geiger climate classification scheme to classify world climate is based on the concept that native vegetation forms the best expression of climate. The modified Köppen-Geiger climate classification of Australia adopted by the Bureau of Meteorology (Stern et al., 2000; BoM, 2014) characterises most of the subregion as hot grassland, persistently dry in the south and with dry winters in the north. The north-western part of the subregion is classified as hot desert mostly with dry winters and small patches persistently dry. At the eastern margin are areas classified as subtropical, mostly with moderately dry winters and some small patches of distinctly dry winters. Figure 11 shows mean annual rainfall across the subregion, indicating a strong trend of decreasing values inland from the coast with some added complexity due to elevation of the eastern highlands. Most of the subregion has a mean annual rainfall between 300 and 600 mm but values vary from less than 300 mm in the north-west to more than 700 mm in highland parts of the south-east and north-east. Figure 12 shows the potential evapotranspiration across the subregion with values increasing away from the coast and towards the north and centre of the continent reflecting the high temperatures and low atmospheric moisture of the desert interior. The contrast between Figure 11 and Figure 12 demonstrates the excess of potential evapotranspiration over precipitation across the region. Figure 13 – which shows mean monthly rainfall, potential evapotranspiration, and maximum and minimum temperatures averaged across the subregion – demonstrates that this applies to all months of the year. 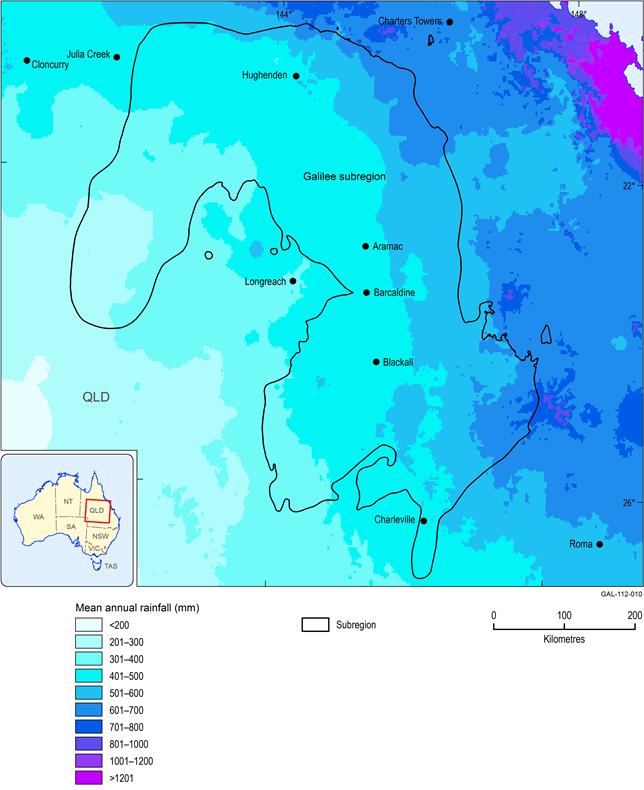 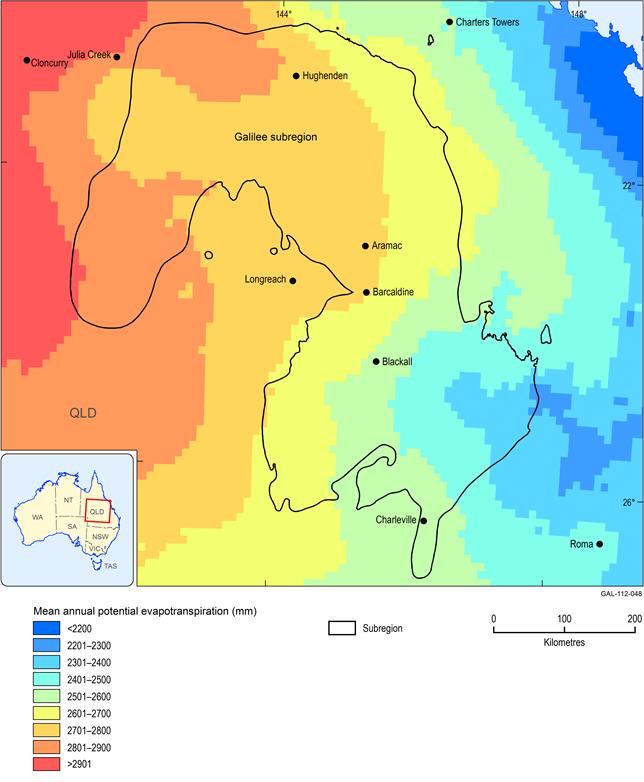 Figure 13 shows that the region experiences hot summers with mean maximum temperatures over 35 °C and minima over 20 °C. Winter maxima are warm (>20 °C) and minima cool (<10 °C) and the relatively large diurnal range throughout the year reflects the continental setting. Precipitation is generally low and shows a distinct summer maximum which is more evident in the northern part of the subregion than the south. Average January precipitation for Hughenden in the north is 114.5 mm compared to 74.4 mm for Charleville in the south. The lowest rainfall occurs in the late winter to early spring period (August to September) and is lower in the north than the south, with Hughenden averaging 7.9 mm and Charleville 19.5 mm for August. Importantly, rainfall is highly variable from year to year across the whole subregion with Hughenden recording the lowest on record to highest on record figures for January of 2.0 mm to 659.7 mm and for August of zero to 119.8 mm. The corresponding figures for Charleville are 4.6 mm to 263.8 mm and zero to 91.5 mm, respectively.

CSIRO and Bureau of Meteorology (2012) is based on historical records and shows a 0.9 °C increase in mean annual temperature between 1910 and 2011. The records show little consistent change between 1910 and 1950 followed by a progressive increase since 1950 , with each decade since 1950 being warmer than the previous decade. This clear warming trend is complicated by a background of natural variability due to factors such as El Niño – Southern Oscillation (ENSO) and regional differences. Overnight minimum temperatures have warmed more than daytime maxima. The records show that the annual average daily mean temperature of the Galilee subregion warmed by 0.4 to 0.8 °C in the north and 0.8 to 1.2°C in the south between 1960 and 2011. Australian rainfall is highly variable but certain trends are evident in some areas, such as reduced winter rainfall in south-western Australia. The Galilee subregion does not lie in a region with a strong rainfall trend but is likely to have had a slight increase over recent decades along with northern monsoon-rainfall areas. Extreme events are rare and it is more difficult to identify statistical trends in their frequency or intensity than it is for average conditions. However, across the continent, hot days and nights, heatwaves, periods of high fire danger and heavy rainfall events have all increased in intensity in recent decades. No significant trend in the frequency of total numbers or high-intensity of tropical cyclones has been apparent in the Australian region. The CSIRO and Bureau of Meteorology (2012) survey concluded that both natural and human influences have affected climate over the past 100 years and that anthropogenic greenhouse gases have caused most of the surface warming, temperature extremes, ocean warming and sea-level rise, which is consistent with global patterns. The reduction in rainfall in the south-west since the 1970s is also most likely to be due to increased anthropogenic greenhouse gases, though other less marked rainfall trends in other regions are more difficult to attribute. Recent droughts, such as the severe ‘millennium drought’ which lasted a decade from the late 1990s, have been exacerbated by higher temperatures that increased water stress.

CSIRO (2007) provides projections of future changes in the Australian climate, under different emissions scenarios, and the application of those projections for impact studies and risk assessments. The study used 23 climate models used by climate research groups around the world with different Intergovernmental Panel on Climate Change (IPCC) greenhouse gas emission scenarios converted to radiative forcing of the climate system. Projections for annual and seasonal mean changes to temperature, rainfall, humidity, solar radiation, wind speed, potential evaporation and sea-surface temperature are provided in probabilistic form but only qualitative assessments were possible for other climate variables. Projections for 2030 showed varying patterns of regional change but minimal impact of different emission scenarios because such shorter-term future projections strongly reflect the impact of greenhouse gases already emitted. Projections for 2050 and 2070 show more variability according to emissions scenario. The median value (50th percentile) is used as the best estimate with the uncertainty range derived from the 10th and 90th percentile values.

CSIRO (2007) provides the best current estimate of changes to Australia-wide precipitation. CSIRO (2007) suggests that there will be little change in the far north of Australia and a decrease elsewhere of 2 to 5%, especially in winter and spring and especially in the south-west of Australia. Decadal-scale natural variability is of similar magnitude and may therefore counteract or enhance greenhouse gas emissions forced changes. In the Galilee subregion the best estimate (50th percentile) of projected mean annual rainfall is for a slight decline in the range of 1 to 2.5% with a relatively large uncertainty range from a decrease of 10 to 15% (10th percentile) to an increase on 5 to 10% (90th percentile). However, the minimal annual change contains considerable seasonal variability with summer and autumn precipitation showing minimal increase or decrease, and winter and spring showing stronger decrease from 2.5 to 10%. By 2050 the mean annual precipitation projection ranges from a decrease of 2 to 5% under the low-emissions scenario to 5 to 10% under the high-emissions scenario, with estimates of 2 to 10% and 5 to 20%, respectively, for 2070. By 2070 there is a 30 to 40% probability of a mean annual rainfall decline of at least 10% under the low-emissions scenario and a probability of 50 to 70% under the high-emissions scenario.

Solar radiation, relative humidity and potential evapotranspiration are projected to change little with a very slight increase for the former and a decrease for the latter two in 2030 with slightly greater changes for 2050 and 2070, especially under high-emission scenarios. Drought occurrence is projected to increase with increased effectiveness due to higher temperatures. There is a projected possibility of an increase in more intense tropical cyclones but a decrease in the total number of cyclones. ENSO impact projections suggest that El Niño events will become drier and La Niña events will become wetter.