There are three major geological sequences of interest to this bioregional assessment in the Galilee subregion: the Galilee Basin, the Eromanga Basin, and Cenozoic sediments and volcanics. The cross-sections in Figure 15 and Figure 16 demonstrate that rocks in the Galilee Basin are for the most part buried by younger rocks belonging to the Eromanga Basin. Cenozoic sediments and volcanics overlie Eromanga and Galilee basin rocks, but are too thin to be shown on the cross-sections. On the section in Figure 15, the faults that occur near the eastern margin of the Galilee Basin are likely to have a flatter east dip than what is shown.

In some parts of the Galilee subregion, the Adavale, Belyando, and Drummond basins overlie the Thomson Orogen basement rocks (Figure 17). The Early to Middle Devonian Adavale Basin sequence includes volcanic rocks, fluvial, marine and evaporative units. The basal unit is the Gumbardo Formation which mainly comprises felsic volcanics and interbedded volcaniclastic sediments. Subsequent tectonic events led to the formation of half-grabens and the deposition of fluvial sediments of the Eastwood beds and Log Creek Formation. Ensuing marine incursion led to the deposition of carbonate and siliciclastic strata of the Lissoy Sandstone and Bury Limestone. A change to arid climate involved the deposition and transformation of carbonate rocks to dolomite, and widespread formation of halite-rich sediments (i.e. Cooladdi Dolomite and Boree Salt formations). Following a hiatus, the Etonvale and Buckabie formations were deposited in fluvial to marginal marine environments (McKillop, 2013).

The Late Devonian to Early Carboniferous Drummond Basin units outcrop to the east of the Galilee subregion, but also underlies the eastern margin of the Galilee Basin. These units consist of sedimentary and volcanic rocks that were deposited in three major depositional cycles (Henderson and Blake, 2013). The stratigraphy of the final cycle, which is in contact with the Galilee Basin, includes the Ducabrook, Natal, Star of Hope and Bulliwallah formations. These units can be up to 1800 m thick and consist primarily of volcaniclastic sandstone, siltstone, mudstone and tuff. Little is known about the Belyando Basin as it has not been drilled, but it predates the Drummond and Galilee basins and is younger than the Thomson Orogen (Draper, 2013). 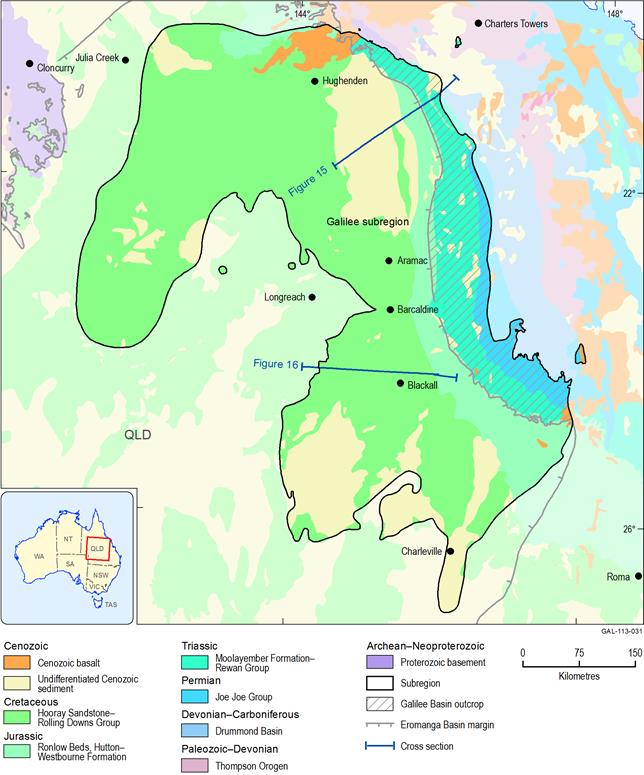 Figure 14 Surface geology of the Galilee subregion and surrounds 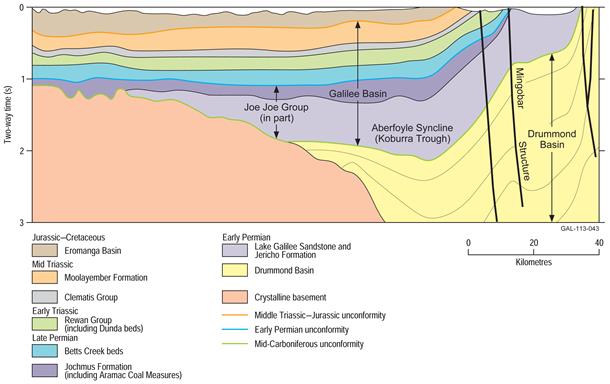 Source: Figure 3.111 McKellar and Henderson (2013) TWT equates to Two Way Time. This interpreted geological section is derived from a seismic survey section. Two way time is a measure of the amount of time it takes for sound wave generated by a seismic survey to be reflected off a feature in the earth then return to surface.

Source: Figure 3.113, McKellar and Henderson (2013) TWT equates to Two Way Time. This interpreted geological section is derived from a seismic survey section. Two way time is a measure of the amount of time it takes for sound wave generated by a seismic survey to be reflected off a feature in the earth then return to surface. 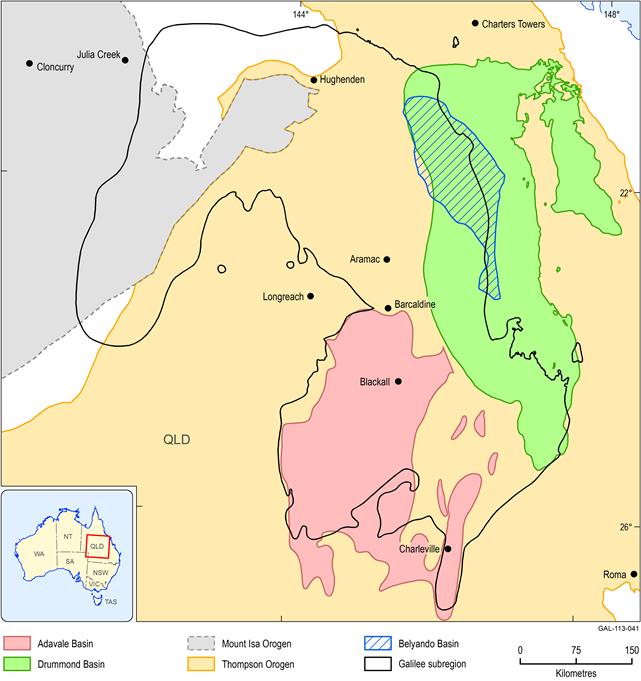 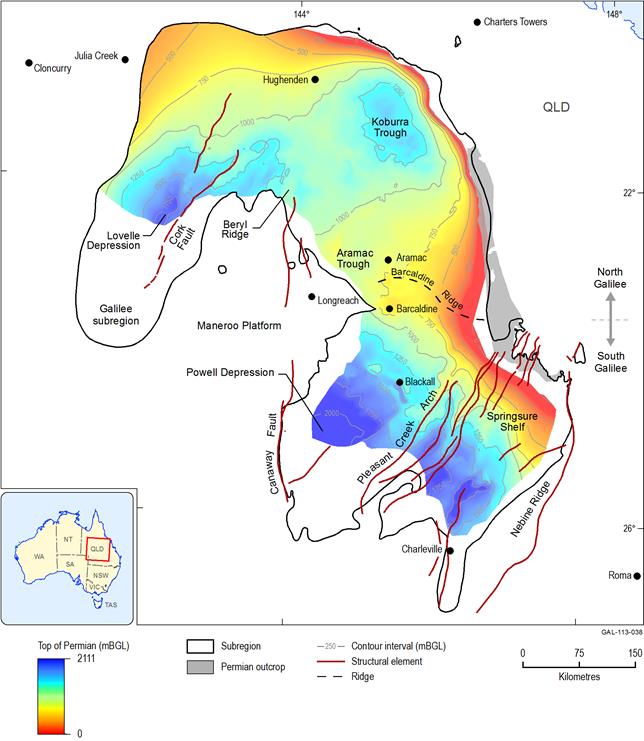 Figure 18 Structures and depositional centres in the Galilee Basin

Source data: Top of Permian surface mapping derived from Bradshaw et al. (2009). While Permian exists throughout the basin, not all of it was shown in the mapping presented in Bradshaw et al.(2009). mBGL – Metres below ground level

Canaway Fault/Canaway Ridge: North-trending structures that separate the Galilee from the Cooper Basin. The Canaway Fault is a normal fault downthrown to the east (Galilee side), which was active during the Early Permian. Late Permian to Triassic sedimentary rocks can be correlated between the two sedimentary basins, across this major fault. Reactivation during the Paleogene increased displacement across the fault by about 400 m (Ransley et al., 2012).

Nebine Ridge: North-trending basement high that forms a boundary between sedimentary sequences in the Bowen Basin – Surat Basin to the east and the Galilee Basin – Central Eromanga Basin to the west.

Lovelle Depression: North-east trending depression infilled with up to 700 m of Galilee Basin rocks (Hawkins and Green, 1993). It was also an active depositional centre for the overlying Eromanga Basin.

Cork Fault: A basement-intersecting normal fault, downthrown to the west. It occurs along the south-eastern margin of the Lovelle Depression. This fault was active during the development of the Lovelle Depression in the Early Permian (Van Heeswijck, 2010). It was later reactivated in the Paleogene, with a further 420 m of displacement (Ransley et al., 2012).

Beryl Ridge: North-trending ridge of crystalline basement that forms an extension from the Maneroo Platform.

Aramac Trough: North-easterly trending depression running from the edge of the Maneroo High towards the Koburra Trough.

Koburra Trough: Significant north-trending trough near the eastern margin of the Galilee Basin, mainly north of the Barcaldine Ridge. The Koburra Trough is interpreted as one of the earliest features to form in the Galilee Basin and contains up to 2800 m of sedimentary rocks. Part of the eastern margin of the trough is structurally defined by a series of folds and east dipping thrust faults Van Heeswijck, 2010). The Koburra Trough was not an active depositional centre for the Eromanga Basin.

Pleasant Creek Arch: North-east trending structure between the Springsure Shelf and south-eastern margin of the Powell Depression. It is associated with the Warrego Fault.

Springsure Shelf: The area located between the Nebine Ridge and Pleasant Creek Arch near the south-eastern margin of the Galilee Basin. Significant north-east trending fold structures that occur in this region are not evident in the north Galilee Basin (Van Heeswijck, 2006). The folds developed during the Paleogene (around 50 Ma) and have deformed sedimentary sequences in the Galilee Basin and overlying Eromanga Basin.