Northern SA, and in particular the Lake Eyre Basin, is made up of three dominant landscape or environment types:

The area is recognised for being part of the driest area in Australia, however its diverse flora and fauna are not generally appreciated (Brandle, 1998).

The stony or gibber deserts of the Lake Eyre Basin were first described to the European settlers by Captain Charles Sturt following his search for the great inland sea during the mid 1840s (Sturt, 1849). The stony deserts north-west of Kati Thanda – Lake Eyre were traversed 50 years later (1894) by the Horn Natural History Expedition (Spencer, 1896).

Systematic descriptions of parts of the Assessment area began with botanists. Jessup (1951) described the habitats of substantial areas to the west of Kati Thanda – Lake Eyre, and produced some structural vegetation community maps. This work and the efforts of Murray (1931) and Crocker (1946) with the aid of Northcote’s (Northcote et al., 1968) soil maps, provided the groundwork for much of Specht’s synthesis of the vegetation communities of SA (Specht, 1972).

There have been numerous specific biological surveys in the areas comprising the Pedirka and Arckaringa subregions. The earliest was an undergraduate student project in the Breakaways Reserve area to the south (Hobbs, 1987). The South Australian Department for Environment and Planning undertook a survey of the Tallaringa Conservation Park prior to its dedication (Robinson et al., 1988) in the sandy areas to the west. The Australian & New Zealand Scientific Exploration Society undertook two surveys in the hills of Arckaringa Station to the north-east (ANZSES 1994, 1995). The Stony Plains and breakaways to the east and north-east were sampled in 1995 as part of the Biological Survey of the Stony Deserts (Brandle, 1998). This survey sought to systematically sample the central Australian gibber country, the bulk of which occurs in the South Australian portion of the Lake Eyre Basin, and to draw together information gathered about similar land types in adjacent areas of other states. A number of quadrats were also sampled in 1992 on Evelyn Downs Station adjacent to the north-east of Mount Willoughby as part of a threatened species project, the results of which were included in Biological Survey of the Stony Deserts (Brandle, 1998). The Biological Survey of the Anangu-Pitjantjatjara Lands sampled the hard mulga and sand country to the north and north-west in 1996 and 1998 (Robinson et al., 2003).

More recently a biological survey and vegetation mapping of the Mount Willoughby Indigenous Protected Area (IPA) was undertaken to assist the management of the area for biodiversity and management planning. The Sandy Deserts Survey (including Simpson, Pedirka and eastern portions of the Great Victoria Desert) contributed a vast amount of data and vegetation mapping (J. Foulkes, in prep.). Similarly, the Arid Rivers Survey (creeks and floodplains in western Lake Eyre Basin catchments) undertook vegetation and fauna sampling (including fish) (DEWNR, unpublished).

Other work in the region has come in the form of a conservation management appraisal of the former Mount Dare Station, which resulted in its purchase for the Witjira National Park (Davey et al., 1985) and other more specific studies. For example, there have been ongoing investigations into the springs since a major overview of the vegetation, fish and invertebrates was produced in 1985 (McLaren et al., 1985). A number of species-specific studies that have been published are listed in the introductions to the various chapters. Davies (1995) published a report dealing with the management of several threatened plant species populations in the area.

Data sourced from the Biological Database of SA and Atlas of living Australia, identifies the distribution of threatened flora and fauna for the Arckaringa subregion, shown in Figures 3 to 6. It should be noted that these databases do not include all data collected in the region, particularly aquatic species monitoring records (e.g. Costelloe et al., 2004; Cockayne et al., 2012, 2013; McNeil et al., 2011). All records from sites within a 5km buffer of the subregion are displayed. Species are displayed as having a conservation ranking if they have a threatened status of critically endangered, endangered, vulnerable or rare under the following:

The location of other species records for the relevant biotic group (‘non-rated species’) are displayed (black dots) to indicate the distribution of survey sites across the subregion and level of survey effort. As can be seen from the maps, surveys generally follow roads and tracks and less data are available for sites away from roads and tracks. Survey methods, including site selection, are provided in survey reports.

Conservation rankings for significant species are provided in Table 12.

There have been a total of 99 taxa from 9 reptile families recorded from within the Arckaringa subregion (Table 13 and Figure 36). There is a single EPBC rated reptile species, the Bronzeback Legless Lizard (Ophidiocephalus taeniatus), which is also rated Rare at the state level and Vulnerable at the regional level. It is endemic to the western Lake Eyre Basin and is confined to dense leaf litter in drainage lines in mulga woodlands (Table 13).

There are four reptile species that are rated Rare regionally and one rated Vulnerable. Slaters Skink (Liopholis slateri) is rated as Endangered in SA, however it was not considered in regional ratings. Two subspecies have been described; L. s. slateri from the southern NT (NT) and L. s. virgata from northern SA. The SA subspecies is known from only four specimens; three collected in 1896 from the Oodnadatta area, the other collected in 1914 between Oodnadatta and Everard Range. No other specimens of this subspecies have been located and little is known about their ecology or whether they are still present. At most sites, Slater’s skink occurs in shrubland and open shrubland on alluvial soils close to drainage lines, although all historical sites have been in open floodplain type situations (McDonald 2012). Figure 4 shows the distribution of rated species records within each rating category and the density of rated species records within 1 km2 grid cells. Densities of up to 8 records per 1 km2 grid cell have been recorded from numerous locations within the subregion, with a higher concentration of locations NW and SE of Coober Pedy. 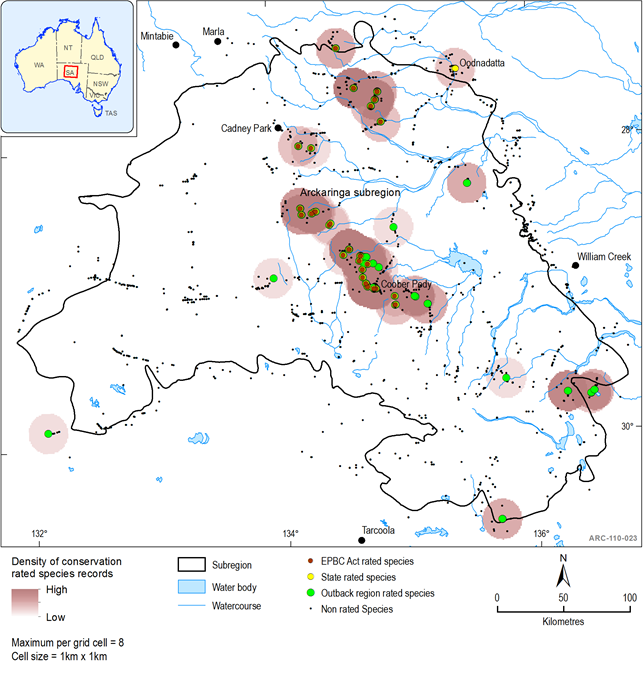 Within the Arckaringa subregion, approximately 220 native taxa from 59 bird families have been recorded. Of these, 75 taxa from 37 families have a National (EPBC ‑ 4 taxa), State (SANPWS ‑ 37 taxa) or Regional (Outback NRM Region - 68 taxa) conservation status rating (Table 14). Figure 37 shows the distribution of rated species records within each rating category and the density of rated species records within 1 km2 grid cells. Densities of up to 14 records per 1 km2 grid cell have been recorded from numerous locations within the subregion. More than 40 species are waterbirds (including migratory birds) or birds dependent on wetlands or riparian systems for breeding or roosting (Table 14 and Figure 37). 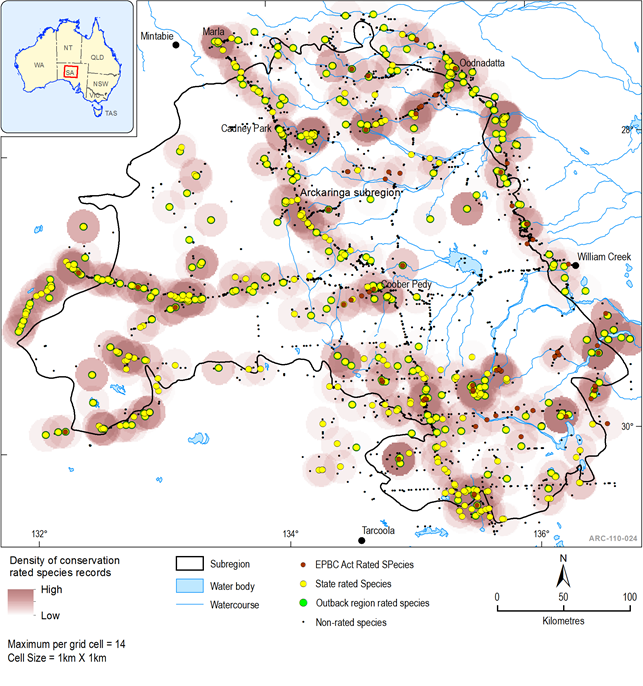 Within the Arckaringa subregion, 46 native taxa have been recorded from 13 mammal families. Of these, 18 taxa from 11 families have a National (EPBC - 12 taxa- 6 extinct), State (SANPWS – 15 taxa (including 5 extinct in SA) or Regional (Outback NRM Region - 15 taxa (including 5 regionally extinct)) conservation status rating (Table 15 and Figure 38). Figure 38 shows the distribution of rated species records within each rating category and the density of rated species records within 1 km2 grid cells. The highest density of records is in several locations south of Coober Pedy, south-west of Oodnadatta and east of Cadney Park. 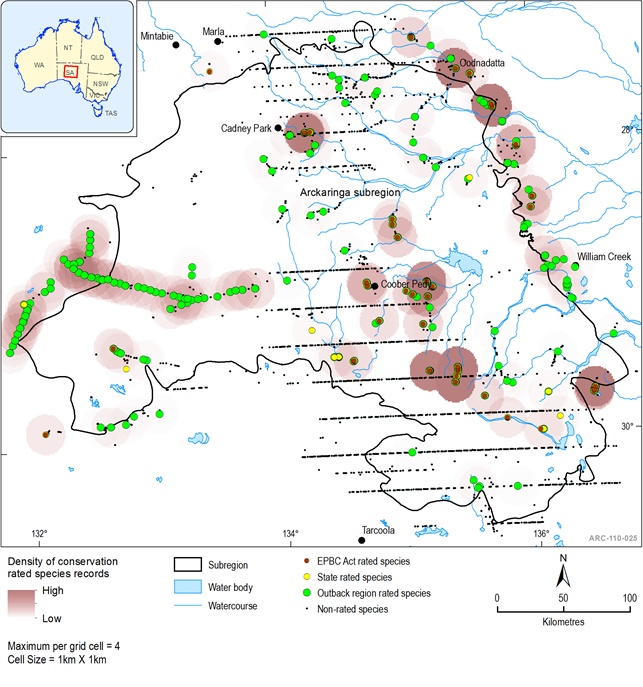 Figure 39 Distribution of significant flora in the Arckaringa subregion